With their final regular-season match ending in a scoreless tie at Rice, the Cougars have compiled the highest overall 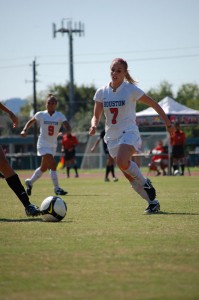 winning percentage in program history with a record of 11-4-4 (.684) and now will make their seventh Conference USA tournament appearance when they face off against Marshall at 4 p.m. Wednesday in Orlando, Fla.

The Cougars defeated the Thundering Herd, 2-0, in their Oct. 16 match at Robertson Stadium with goals from freshman Kylie Cook and Fabi Cirino. The contributions of underclassmen toward the Cougars’ success cannot be overlooked. Of the 10 Cougars who amassed at least 900 minutes on the field this season, seven of them were either freshmen or sophomores, with Cook and fellow freshman Danielle Munoz holding the top two spots.

Since their defeat to the Cougars, the Herd reeled off three consecutive victories to close out the season and lock up the final spot in the tournament. The Herd are winless (0-4-1) against teams who qualified for postseason play. The Cougars are 2-1-2 with their lone loss coming against tournament host and top seed Central Florida.

Despite opening play against an opponent that it has already had success against, the team will be faced with the challenge of playing away from Robertson Stadium. The Cougars have not won a game away from their home field since their Sept. 19 victory over Texas-San Antonio. They finished conference play with a record of 0-2-3 in away games.

The Cougars’ third-place finish in C-USA was their best since 1998. They hope to advance past the first round for the first time since 1999, when they defeated South Florida 3-2.

This will be the Cougars’ first postseason appearance under head coach Susan Bush. The program has made significant progress since Bush took over. In her first season as head coach in 2007, the Cougars were winless in C-USA play, going 0-8-1. Now they are one of the top teams in the conference, with room to only grow from here with a young core of players.