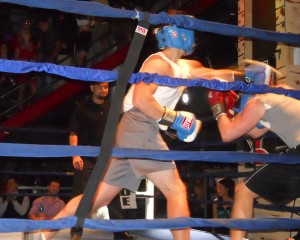 Network and two other charities.

“This year, we plan to make three different donations because of the success of Fight Night,” Sigma Chi Co-Chair of Fight Night Calvin Hart said. “We will donate at least $1,000 to the Children’s Miracle Network, the Huntsman Cancer Institute and the Sigma Chi Foundation.”

The fundraising event, which is in keeping with the fraternity’s value of community service, has been a yearly tradition for more than 30 years. Starting in 1975, Sigma Chi’s Fight Night was originally held in the Houston Room of the University Center and remained there until 2007.

Because the Greek event was growing, there was a need for a bigger venue. Rich’s Nightclub became the venue for the annual Fight Night in 2008. Last year, Fight Night raised more than $4,000, which was donated to the CMN.

The link to CMN is a tradition in itself.

“Donations to the Children’s Miracle Network, by way of Texas Children’s Hospital, have become a Fight Night tradition for our UH chapter over the years because of the opportunity to personally visit, help and donate to those in need in the Houston area,” Jamison said.

The Fight Night consisted of ABA-sanctioned amateur boxing matches from students of the UH Greek community.

Amateur boxers who participated at this year’s event were members of Sigma Chi, Sigma Phi Epsilon and Tau Kappa Epsilon. Plans are also underway by the fraternity to sponsor a holiday toy drive.