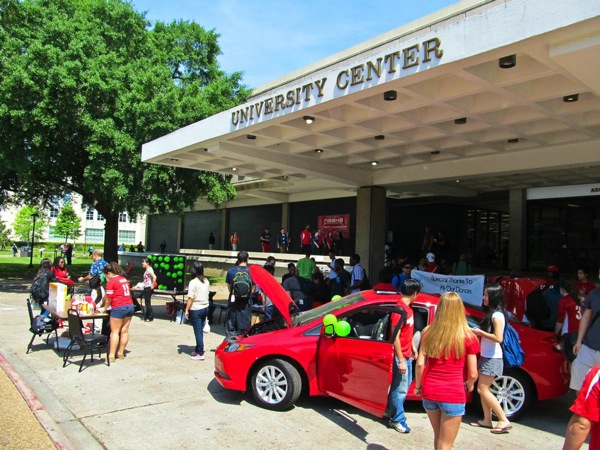 Cougar Concepts promoted the 2012 Honda Civic Coupe in their “How Do You Civic?” event Tuesday in front of the University Center. | Courtesy of Angela Finnelsr

Students crowded around the new 2012 Honda Civic Coupe parked in front of the University Center on Tuesday for a promotional event organized by Cougar Concepts.

The attendees played with the radio and other dashboard gadgetry and enjoyed free food, games and giveaways while asking questions about the car’s gas mileage and price points of the Cougar Concepts crew.

The students of Cougar Concepts were required to do a campaign briefing and create ads for Honda during the semester.

This year’s event was centered on the theme, “How do you Civic?” According to Chelsea Lewis, a member of the student-run agency Cougar Concepts, the theme has to do with a person’s individuality and style, and the way they drive their car.

Cougar Concepts worked with Honda and EdVenture Partners to encourage college students to communicate and share how they interact with the Honda Civic Coupe.

The students of Cougar Concepts collaborated and developed this marketing campaign for Honda. The students produced 900 flyers, posted ads, placed 50 yard signs strategically on campus and wrote a press release, which was posted on the group’s Facebook page.

Jerne Davidson, an event coordinator for Cougar Concepts, explained that UH was one of 22 universities chosen by EdVenture Partners to represent them and create a real campaign for the Civic.

“A lot of our success is going to be measured by how this event turns out — the number of attendees — the number of people that are swayed by us to buy the car and everything of that nature,” Davidson said.