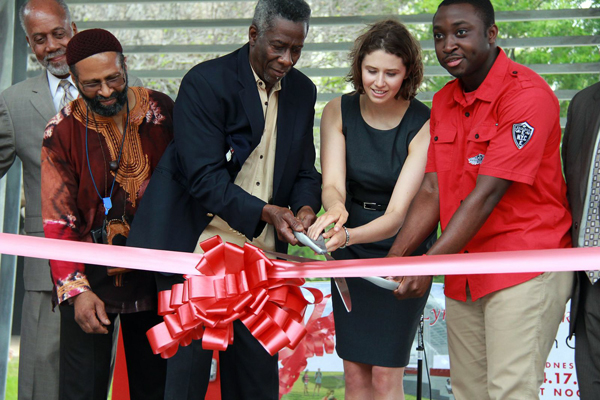 Members of the UH community officially opened the new Lynn Eusan Park stage on Wednesday. The ribbon-cutting ceremony, which was orchestrated with custom-engraved silver scissors, was followed by a dance performance on the new stage, which features state-of-the-art equipment. | Mary Dahdouh/The Daily Cougar

Lynn Eusan stood in the middle of the Houston Astrodome frozen. It was 1968 and she had just been named UH Homecoming queen, the first African-American to win the honor.

“This was the first time black students on campus have banded together and really been effective against overwhelming odds,” Lynn Eusan told the Houston Chronicle in 1968.

Tragedy struck a mere three years later. The 23-year-old Eusan was found dead in the back seat of a car that collided with a police cruiser, according to the Houston Chronicle. It was later determined that she died from multiple stab wounds.

In 1976, the Board of Regents paid tribute to this iconic woman by naming the park next to the University Hilton after Eusan, in honor of her outstanding contributions to the university.

On Wednesday Eusan was remembered yet again by the University in a ribbon-cutting ceremony that premiered the new and improved Lynn Eusan Park stage.

The new stage will host a variety of events, from screenings to concerts and plays. The university anticipates that the stage will be a great site for recreation. The design of the stage was implemented with the students in mind, said hotel and restaurant management senior and Student Program Board President Jessica Grono.

“Students have been thought of throughout the whole process from the wide stairs so students can study, to the length and depth of the platform so a variety of performers can sing, dance, step and hold pep rallies,” Grono said.

The stage has been relocated adjacent to Cougar Village and the Conrad N. Hilton School of Hotel and Restaurant Management with it being in the center of the main foot traffic on the south side of campus.

The stage has been updated to come equipped with new lighting and an enhanced sound system for outdoor events.

“I think the positioning of the stage in the corner close to the residential halls gives it easy access and easy viewing for students,” said civil engineering senior Tanzeem Chowdhury. “Students can look out their windows and see what’s going on.”

Lynn Eusan Park, which used to house UH mascot Shasta, has been a major venue for various activities hosted by Student Affairs and University Centers. The relocation and upgrade of the old stage can now be used to showcase a multitude of events and enhance campus life. The emotion from Lynn Eusan, the first ever African-American UH homecoming queen, percolated throughout the Astrodome. | 1969 Houstonian

“The impact will be profound; student life is important to us,” said corporate communications and management senior and New UC Representative Jared Gogets. “When students have fun at UH, they stay at UH and they ultimately graduate from UH. That’s what we want.”

The addition to the park will bring the campus community closer and allow a place for students to make memories as they attend a variety of events at Lynn Eusan Park, said Student Government Association Vice President Rani Ramchandani.

“The fact that there is history attached to (the stage) … and relating back to when she was on campus, it’s amazing to be here and see our students enjoying a piece of history,” Ramchandani said.

“This is a tier one facility that we needed for a long time, it’s a major upgrade from our old stage.”