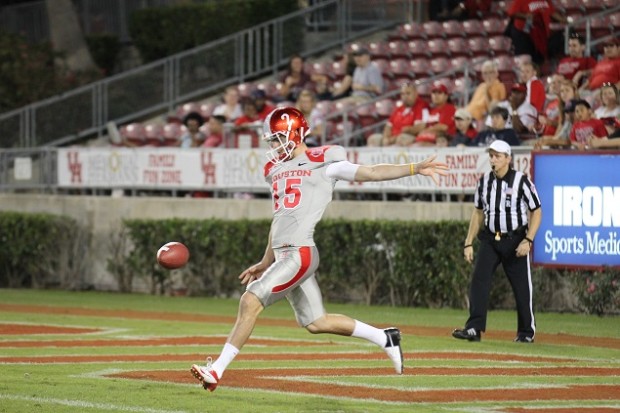 BIRMINGHAM, Ala. — Despite being named a semifinalist for the Ray Guy Award for three straight years, numerous conference awards and participating in a 13-1 season, senior punter Richie Leone said perhaps his favorite moment at the University of Houston was Tony Levine’s promotion to head coach.

The two formed a close bond after Levine, who coached special teams at the time, recruited Leone. Levine remembers flying to Atlanta, renting a car and driving to Roswell, Ga. for six consecutive weeks to convince Leone to choose UH.

“It meant a lot when he got the position. He really cares about us as a whole, not just as a football player. … He has been there for me through some adverse situations. He taught me how to be a professional,” Leone said.

Levine’s persistence paid off. After deciding that UH was the right fit, Leone has become a key contributor to the special teams unit, which will be an important phase of the game if the Cougars hope to capture a bowl victory. The Cougars hope Leone’s leg will provide an edge in field position when they face Vanderbilt at Legion Field in Birmingham, Ala. on Saturday.

Leone’s track record proves he can give the Cougars a leg up in field position.

After tying a UH single-season record with 45.5 yards per punt in 2012, Leone followed with a similarly-strong senior season. He averaged 43 yards per attempt with 14 50-yard punts and 33 which pinned an opponent inside their own 20. Following this season, Leone was selected as a second-team All-American by the Football Writers Association of America.

“We talk to our student athletes about becoming an expert at your position, and he has done that at the punting position,” Levine said. “He has become so reliable that if he does punt the football, and it goes into the end zone, people look at each other and go, ‘What just happened there?’”

Leone expects to be emotional when the time expires on his final collegiate game, but he doesn’t want this to be the end of his football career. Leone accepted an invitation to play in the East-West Shrine Game on Jan. 18 and hopes to participate in the NFL Combine so he can earn the attention of an NFL team.

One of Levine’s former pupils, former Carolina Panthers punter Jason Baker, is giving Leone advice on making it in the NFL.

Senior defensive back Zachary McMillian, who arrived at UH at the same time and has become close friends with the senior punter, said he thinks Leone will be kicking on Sundays.

“I just tell him all the time, ‘Don’t forget me when you make it big in the NFL,” McMillian said.