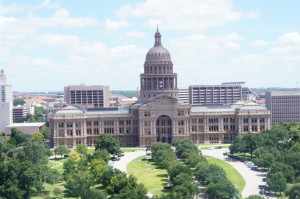 A federal judge has ruled Texas’ ban on same-sex marriage unconstitutional, saying that the 2005 amendment, Texas Proposition 2, “demeans the dignity of homosexuals,” according to NPR.

Texas-born Judge Orlando Garcia struck down the law Wednesday, but he will not enforce his ruling in the 10th Circuit Court of Appeals, according to the Houston Chronicle.

Two Texas couples, Nicole Diemetman and Cleopatra De Leon, and Victor Holmes and Mark Phariss, sued the state in a challenge of the state’s constitution, which was amended in 2005 to define marriage as “the union of one man and one woman.”

“As I suspected all along, since the federal law was changed, it’s just a matter of time for the rest of the states to follow suit. It’s like a domino effect,” said Lorraine Schroeder, program director of UH’s Lesbian, Gay, Bisexual and Transgender Resource Center.

“Because the truth is a ban on same-sex marriage is unconstitutional. There are plenty of people who are willing to step forward and sue for that type of discrimination.”

The Defense of Marriage Act, struck down last year after passing in 1996, did not allow the federal government to recognize any state-allocated same-sex marriages.

“What I know is that right now, nothing is going to change until after the appellate court has had a chance to look at (the law),” Schroeder said. “Once that happens, then I’m sure they’re going to uphold it. Then, having a law that bans same-sex marriage will no longer be on the books.”

Some conservatives, including Gov. Rick Perry, have spoken out against the ruling because of personal beliefs or opposition to a federal judge deciding a state’s law.

“Texans spoke loud and clear by overwhelmingly voting to define marriage as a union between a man and a woman in the Constitution, and it is not the role of the federal government to overturn the will of our citizens,” Perry said in an official statement.

This ruling makes Texas the latest of at least 20 other states to challenge its gay marriage bans.

“My thought — not only is (the law) fair — but something that other people don’t think of is that is your child, the upcoming generation after us, if your child was gay, you would want your child to be happy,” said biomedical engineering freshman Valerie Ayaoa.