Carl Carlucci to step down as VP of Administration and Finance 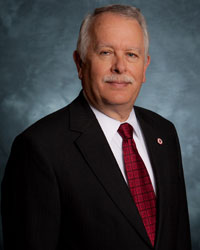 After seven years with Administration and Finance, Carl Carlucci is stepping down. | Courtesy of UH Media Relations

Update on April 16 at 3:16 p.m.: In response to why Carlucci’s request for transfer was denied last year, Carlucci released the following statement: “I made the commitment to increase my teaching over a year ago and spent much of the last year developing new course materials.”

Posted on April 15 at 3:15 p.m.: Carl Carlucci, the Administration and Finance vice president, will step down on May 1.

President and Chancellor Renu Khator said in a letter to the UH System that Carlucci will transition into a full-time faculty position in the College of Liberal Arts and Social Sciences, where he has taught for the past five years.

Replacing Carlucci is Jim McShan, who will serve as interim chief financial officer of the UH System. McShan has worked with Administration and Finance in various roles for the past 20 years.

“He made this request again last month during his annual evaluation, and I have accepted it,” Khator said in the email.

Carlucci’s year at the University has been an embattled one. Chiefly, the Student Government Association voted unanimously to call for the immediate resignation of Carlucci and his deputies in February. The vote followed repeated concerns from members of SGA and the student body about the disorganization in auxiliary services, parking and transportation and HigherOne. The estimated $20 million-overbudget construction of TDECU Stadium and a consequential loss of funds for Hofheinz Pavilion renovations also contributed to the vote.

Following SGA’s vote, the Faculty Senate passed a resolution in support of Carlucci, saying that its members “found Dr. Carlucci and his staff to act only with the highest level of integrity and professionalism in forwarding our shared vision for the future of the University.”

In her email, Khator said that she is “taking this opportunity to obtain an external review of this division,” which will be conducted April 15 through 17.