Tale of the Tape: Houston versus Florida State 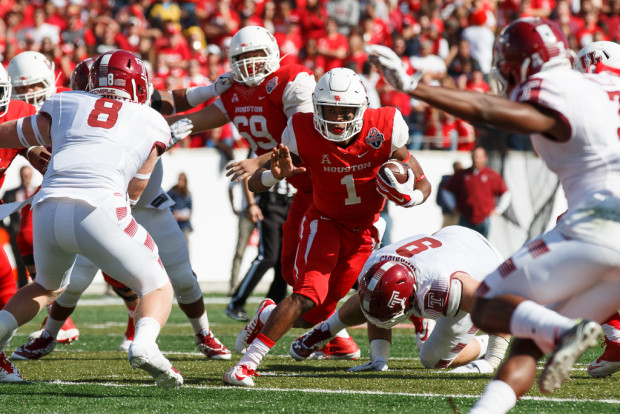 After winning their biggest game of the season, the No. 18 Cougars return for another big game when they face the No. 9 Florida State University Seminoles at the Chick-Fil-A Peach Bowl on New Years Eve. Quarterback Greg Ward Jr. has made it clear that this game will set the tone for Houston’s next season.

With a game of this caliber, we take a look at key matchups that will possibly determine the outcome of game on Thursday.

Running back Dalvin Cook is the core of the Seminoles’ offense with 1658 yards rushed this season. He averaged 150.7 yards per game with 18 touchdowns. There’s a reason why Herman has kept him on his radar. Cook ranks sixth in the nation in rushing yards. It will be interesting to see how he performs against Houston’s defense, which has allowed an average of 3.3 yards per carry.

Senior running back Kenneth Farrow was hurt for the past couple of games, but is expected to start at the Peach Bowl. Farrow rushed for 949 yards in the 11 games played this season. He averaged 86.3 yards per game with 12 touchdowns in the season. Farrow struggled early in the season but found his stride midway through.

Who wins: There are two factors that really make this matchup interesting. Cook will be playing against Houston’s underrated rushing defense and Farrow won’t be at 100%. I think Cook manages to get off a couple of big plays and put up better numbers than Farrow. But with Farrow and Ward splitting the work load, Houston will put up more rushing yards than Florida State.

What is there to say about Greg Ward Jr. that he hasn’t already showed us this season. He’s a dual-threat quarterback that can pick apart any defense if they’re not careful. Ward averaged 80.1 rushing yards this season with 19 touchdowns. He set a school record for most rushing touchdowns by a quarterback in a single season. Ward also averaged 199.2 passing yards per game with 16 touchdown passes in the season.

With quarterback Everett Golson not making the trip to Atlanta due to family issues. Backup Sean Maguire will start in his place. Maguire played in seven games this season and started four. Maguire is more of a traditional pro-style quarterback. He’s not much of a rusher, Maguire chooses to stay in the pocket and look for the open receiver. He averaged 161.1 yards per game and had nine touchdown passes in the season.

Who wins: I expect Ward to have the better performance with more experience and his ability to rush and make big plays happen when he doesn’t find the open receiver.

Junior wide receiver Demarcus Ayers really came into his own this season, averaging 87.7 yards per game. Ayers had a total of 1140 yards with six touchdowns. Ayers is the type of receiver to make something happen out of nothing. When you think a ball is out of reach, he finds a way to make the catch.

Kermit Whitfield led the Seminoles in receiving with an average of 61.8 yards per game. Whitfield had a total of 742 yards on the season with six touchdowns.

Who wins: Demarcus Ayers should be able to win this match up once Houston is able to get their offense going.