Three UH students vied for the presidency of the 53rd administration of the Student Government Association Wednesday night at the Student Center South Theater during a debate hosted by the Cougar.

With UH’s rapidly changing student body, what needs do you think students are developing?

Smith made it clear he thinks more students need to be involved while the University transitions to a residential campus. Of the students who are already involved, Smith said the next president needs to find ways to bring those students together.

“We also need to avoid creating separate bubbles, (and) we need to bring those bubbles together,” Smith said.

Do you believe the possibility of University of Texas expanding into Houston is a threat? Why?

All of the candidates agreed the University of Texas’ plans to expand in Houston are an invasion, and they were not in favor of the expansion. Fields pointed out his campaign fliers personally call for students to oppose the expansion, and added that if UT does plan to expand, UH should be given access to the PUF, or permanent university fund, that exclusively supplies UT and A&M with millions of dollars in additional funding. Presidential candidate John Fields said he is opposed to the UT expansion and argued the voice of the student body was a powerful tool the next president should utilize. | Justin Tijerina/The Cougar

“Having UT in Houston is a duplication of your tax dollars, just as a tax payer in general,” Fields said. “We own this area. This is our town. Having a president that is fighting this issue…that’s super important.”

Smith agreed with Fields but asserted that SGA does not have any power in the issue. Smith mentioned that Fields’ fliers request a call to action that is pointless, and the next president should focus instead on making UH a better university as a whole.

“We need to be better than any campus than UT can build here,” Smith said. “We need to improve our academics, our student life…and focus on matters SGA can influence.”

Fields rebutted Smith’s claim that his call to action was pointless by mentioning the power of a unified student body.

“The voice of 40,000 students matters,” Fields said. “Don’t let anyway say your voice doesn’t matter. We can keep UT out of Houston.”

Mascorro agreed with Fields when he mentioned UH should have access to the PUF.

“(President Renu) Khator said it best,” Mascorro said. “We are not afraid of competition as long as the playing field is level.”

With SB11 going into effect in August, what are your thoughts on campus carry? Edwin Mascorro, who was recently the target of an attack ad that claimed he supported NRA myths, said he was in support of campus carry and would work to make sure students felt protected. | Justin Tijerina/The Cougar

Fields said he believes the most important thing his administration can do is to make sure students are informed of the rules and will know how to handle certain situations when the time comes.

“It’s a really touchy issue, and we need to make sure we are addressing it in a way that is really logical,” Fields said. “Every student should know how they need to respond in a situation. With that knowledge comes a sense of security, and that’s really what SGA’s goal should be.”

Smith admitted he does not like campus carry and his top priority would be to keep guns out of residence halls. When asked where students with concealed handgun licenses who lived in residence halls would leave their weapons, Smith said he was not sure but mentioned options like leaving guns at gun ranges or creating a gun storage facility on campus.

Mascorro, who was recently the target of an attack ad that claimed he supported NRA myths, said that he has always supported the bill, and he believes students should have the right to protect themselves.

“I know the process people go through to be able to legally carry their concealed handguns,” Mascorro said. “Knowledge is power, (and) fear is not the way to go.”

Where does SGA fall among your personal priorities? What other responsibilities do you have that might compete with your time?

Smith was quick to call out Fields for quitting his position as Speaker of the Senate for an internship.

Fields rebutted Smith’s claim by calling it a personal attack and added that his transition leaving the position as speaker was “seamless.”

Mascorro said that despite his involvement in many organizations, such as veteran services and Greek life, he would make the appropriate changes necessary to divert his full attention to the position of president.

“I’m very involved with this University,” Mascorro said. “It’s all about sacrifices and time management.”

How would you deal with a Senate that is divided on an issue?

When addressing a conflicted senate, Fields said listening to the concerns of each party is a critical step to finding a solution.

“It comes down (to) working with people and listening to their concerns and their ideas,”
Fields said. “At the end of the day, we are all here to make UH a powerhouse. We can’t get caught up in the arguments, so (I would) just try to keep it all in perspective and convey that to the senate.”

Smith said he would work to understand each side that was being argued and come to a conclusion that both parties agreed on.

“Remaining organized and on topic is key,” Smith said. “If all you can see is your own side, you’re never going to get anywhere. So I would make sure each side saw the other side and to mediate from there.” 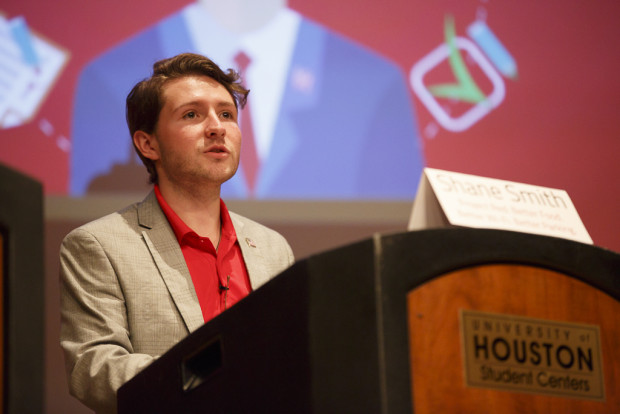 Presidential candidate Shane Smith said while dealing with a conflicted senate he would make sure to listen to each opposing side and work to come to a compromise. | Photo by Justin Tijerina \ The Cougar.