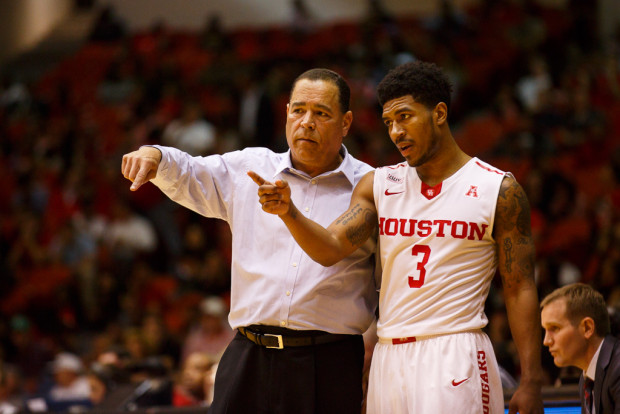 The 2nd-seeded Cougars have a chance to earn an NCAA Tournament berth by winning the AAC tournament title. | Justin Tijerina/The Cougar

We are well into March, and that can only mean March Madness is moments away from dominating the entire sports landscape.

Before the NCAA Tournament begins, however, the schools who have not proven themselves worthy to earn a spot outright must punch their ticket through their respective conference tournaments.

Although UH men’s basketball is thriving under second-year coach Kelvin Sampson, they are far from guaranteed to hear their name called on Selection Sunday.

Heading into the American Athletic Conference tournament, the second-seeded Cougars have won three games in a row and six of their last seven, including wins over the University of Connecticut on the road and the University of Cincinnati, bringing their record to 22-8 overall.

When you consider that at this point one year ago their record was 12-18, that feat is even more impressive.

What isn’t so impressive is the team’s non-conference schedule, which gives them an RPI of 75.

Although the Cougars have taken tremendous strides this season and have played consistently well, without an American Athletic Conference tournament championship, they will have to settle for the National Invitation Tournament at best.

I don’t think that will be the case however, I think these Cougars are going dancing for the first time since 2010.

No one in the AAC, except maybe Temple University, is hotter right now than the Cougars. Entering the conference tourney, UH has won three consecutive games and six of their last seven. Other than Temple, UH is the only team carrying a win streak into the tourney and there isn’t a better time to be clicking on all cylinders.

Houston and Temple faced off back on Feb. 21 in an intense matchup that ended with Temple squeaking out a 69-66 victory in Hofheinz. Looking back now, that loss may be a big contributing factor to how successful Houston’s season turns out.

Temple got the No. 1 seed in the AAC tourney, while UH locked up the No. 2 seed.

Because of its seed, Houston is placed on the lower end of the bracket and will avoid playing Temple, UConn or Cincinnati until the championship round. Instead, they’ll have to go through Tulane, Memphis, UCF or Tulsa, and I’m positive Houston likes its chances in those matchups.

Beat ’em all before

The Cougars have already notched a victory against every team that they could possibly face in this tournament. Temple is the only team that can make the same claim. In previous seasons, this hasn’t always been the case, and that could have played a role in the team’s eventual demise. Houston can approach this tournament with an “It’s nothing we haven’t done before” mindset, and I believe that can pay dividends.

Desperation out of necessity

According to several bracketologists, for Temple, UConn and Cincinnati, a conference championship is not entirely necessary for the teams to go dancing. It would certainly remove any doubt, but they still live without it. This is not the case for the Cougars. They need nothing less than three more wins if they want their season to continue. If that doesn’t light a fire under them, along with possibly becoming the first Houston tournament team in six years, I don’t know what will.