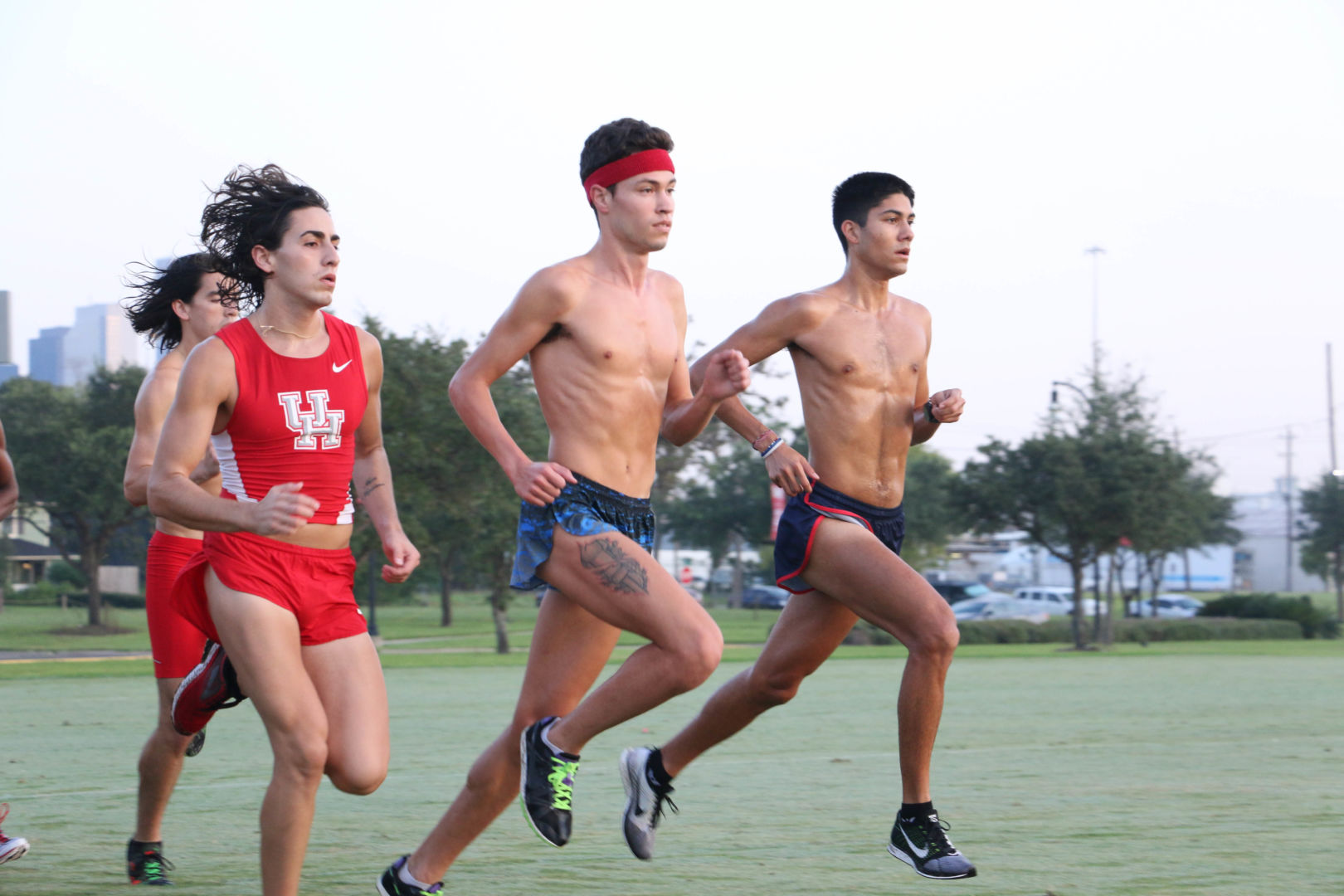 After only placing eighth in the conference last season, the trio of Brian Barraza, Blake Contreras and G.J. Reyna has cross-country believing they can win a title this season. | Thomas Dwyer/The Cougar

Every day at 7 a.m., before the sun rises, head coach Steve Magness gets his cross-country runners ready for their morning practice. It is a grueling task, but Magness knows they need to be ready in a month’s time when they travel to Philadelphia for the American Athletic Conference championship meet.

The men’s team is in a position where they believe they can win this year. Senior Brian Barraza and junior Blake Contreras have rejoined the squad after a year without them saw the team finish eighth at the 2016 conference championship.

Both runners redshirted last season, and their return has given the men the confidence that they can compete with the Tulsa Golden Hurricane for a title.

“I honestly don’t think there’s a limit to what the men can accomplish this season,” Barraza said. “I’m not too concerned about winning or placing well at conference. What I want to be able to say is we all put in the work, we all did everything right, and we all were able to put it all together when it mattered. I think if that’s the case, there’s really no ceiling to what we can do.”

So rather than waste his final year of eligibility, Barraza, who is staying at UH for grad school, opted to redshirt and return when team would have more of a stable base, he said.

Barraza made a strong return to cross country competition by winning the Texas A&M Invitational Saturday, a meet he also won in 2015.

But in Barraza’s absence, junior runner G.J. Reyna stepped up in his sophomore year to take the role as the top runner on the team. Reyna only managed a conference finish in the Top 20 last season but has already shown to have improved his form from last year by winning the Norry Hersey Rice Invitational.

“In my opinion, this last summer was probably the most serious I’d ever taken it,” Reyna said. “I started doing the little things, taking everything a lot more seriously with sleep and recovery and all that. I just think all of that and being patient with it has gotten me here.”

The return of Contreras really rounds out the squad for the men. Contreras started off his career with the Cougars well, placing eleventh at conference as a freshman. But in his sophomore year, he struggled, dropping to 28th and tearing his right metatarsal.

The resulting surgery meant that by the time he was healthy to run, there was no time for him to get into shape. So Contreras ended up redshirting.

Contreras was able to run throughout track and field season, and now he is back in shape. The A&M meet was his first in two years, just like Barraza.

“You’re throwing me and Brian back into it, but on top of that, we have much more better talent than we’ve ever had,” Contreras said. “The guys we do have have stepped it up a lot, so I think right now, we’re just trying to put the talent together and really see what happens at conference.”

The meet at A&M was the team’s first real test of the season. Not being able to run earlier in the month due to Harvey could hurt them down the line. But the men showed strong improvement in College Station, placing fifth as a team, improving on their ninth place finish last year.

As Magness, the head coach, said, the men have the potential to do great this year. It all comes down to them putting in the work and seeing their potential become a reality, he said.