Gridiron Spotlight Week 10: A Tech win is a UH win 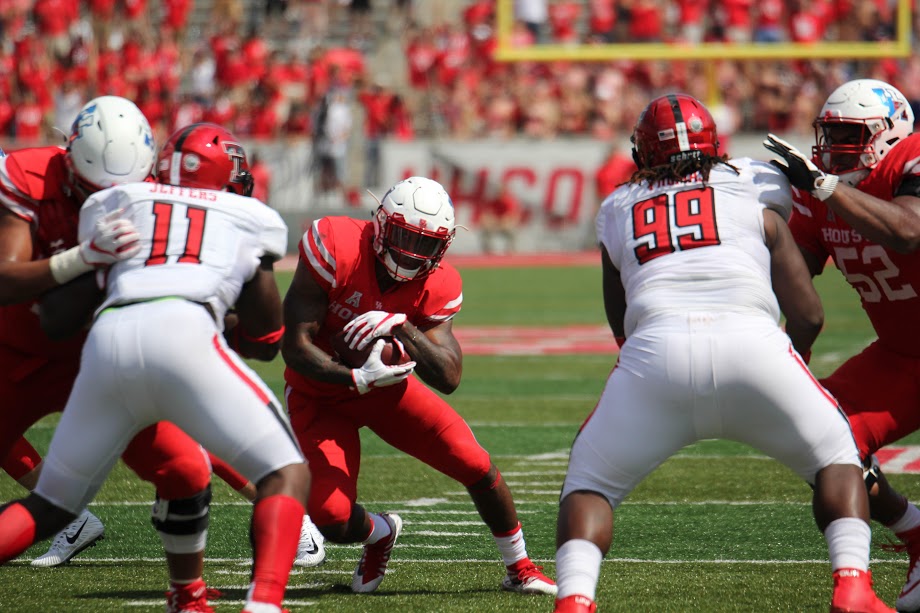 Texas Tech handed UH its only loss of the season so far. The better Tech does throughout the season, the less the loss hurts for the Cougars. | Thomas Dwyer/The Cougar

The initial college football rankings have been released, but despite ranking No. 17 in both the AP Poll and the Coaches Poll, the Cougars failed to crack the Top 25 of the playoff rankings.

This just serves to emphasize the importance of every game left this season, and this week no game is more impactful for UH than the matchup between the Oklahoma Sooners and the Texas Tech Red Raiders. As a bonus, it has the potential to be the highest-scoring showdown this weekend.

Texas Tech has proven to be a talented but inconsistent team. It destroyed a Top 15 team in Oklahoma State, winning 41-17, and did it as an away team. Then as an encore, the Red Raiders promptly went out and lost at home to then-No. 12 West Virginia.

This matters because the Cougars’ sole loss of the season is to the Red Raiders. The better Texas Tech does, the more that one loss is mitigated, which could help Houston become ranked by the playoff committee.

If the Red Raiders can manage to defeat the Sooners, it will happen as a result of Tech simply being able to outscore Oklahoma. Each team is in the Top 10 in points per game, combining to average over 91 points per game. The points explosion for these teams is helmed by their passing attacks. Each team puts up over 300 passing yards per game, led by the Red Raiders’ freshman quarterback Alan Bowman and the Sooners’ junior quarterback Kyler Murray.

On offense, the balance displayed is the biggest difference between these two teams. Texas Tech gains a respectable average of more than 150 rushing yards per game, but compared to its 376 passing yards per game, the numbers are clearly skewed.

Then there is Oklahoma, which displays a much more balanced approach. To go along with its 311 passing yards per game, the Sooners also put up nearly 240 rushing yards per game. Those numbers give it both the No. 12 ranked passing offense and the No. 13 ranked rushing offense in the nation. Oklahoma is one of only two schools in the nation that finds itself in the Top 15 in both categories.

The Sooners will look to keep the Texas Tech defense off balance by attacking them at every level of the field.

Conversely, the Red Raiders will look to exploit the one weakness the Sooners have shown — a regression of Murray away from Norman, Oklahoma. While it is admittedly a small sample size, in the games the Sooners have played away from home, Murray and the Sooners’ offense look significantly different than at home.

As evidenced, the Sooners’ passing attack loses a bit of its luster on the road. More alarmingly, Murray’s yards per attempt takes a sizable dip.

On road battles against Iowa State and TCU, Murray becomes more conservative with his passing attempts and the offense slows down enough to cost it about a touchdown per game. In Lubbock, the Red Raiders score an average of about 50 points per game, so if Texas Tech can keep the Sooners on pace for the 45 points it has averaged on the road, the Red Raiders will have a chance at the upset.