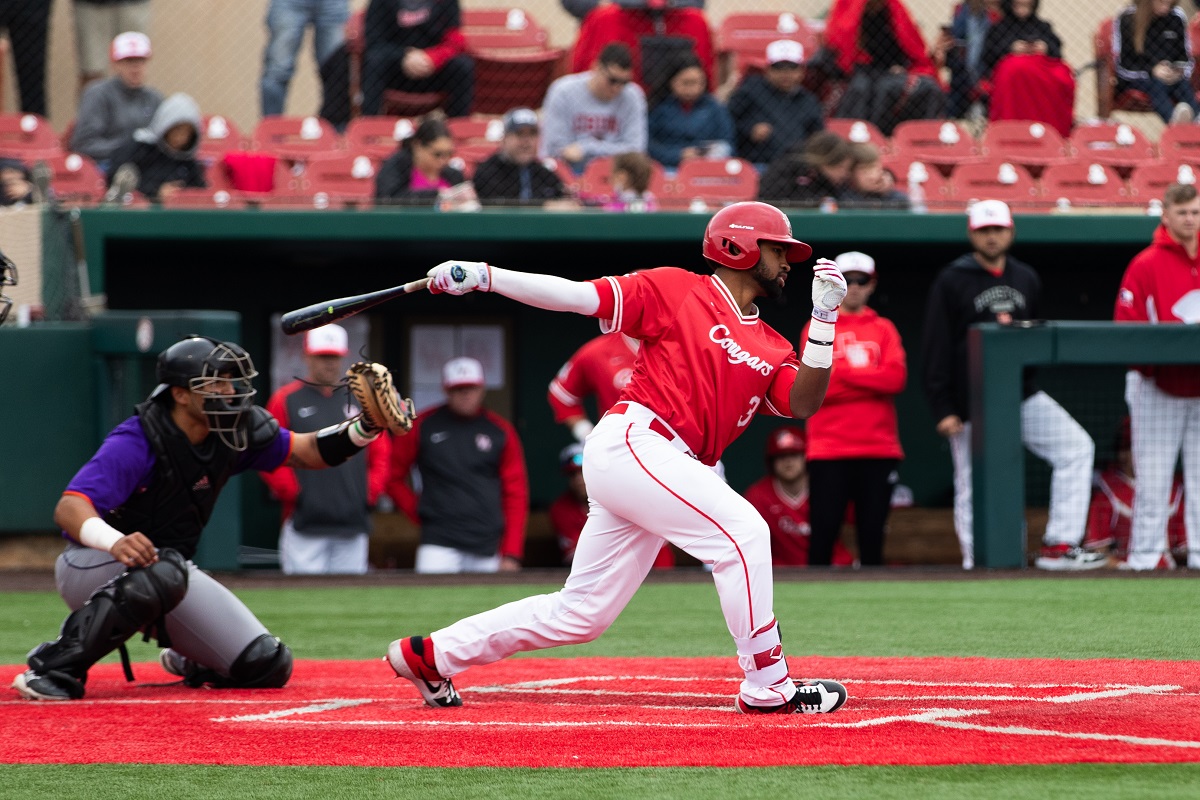 Junior Kobe Hyland was hit by a pitch in the final inning of the game against FIU, which set up the game-winning run. | Ahmed Gul/The Cougar

Houston finished 2-0 in its midweek games and beat Lamar 8-7 and FIU 5-4 to build momentum after a 1-2 weekend.

Houston has become known for using multiple pitchers during midweek games, and seven pitchers saw the field in each game this week.

Tuesday night, Houston rallied back late from a 7-5 Lamar lead to win the game in the ninth.

Houston found itself behind early 2-0 in the second inning but gained a run in the third to decrease the lead.

The Cardinals increased their lead by three in the third, but the Cougars rallied back with a series of hits in the fourth inning to tie the game before an error allowed the team to take the lead by one run.

Lamar regained the lead after scoring three runs in the fifth to take a two-run lead heading into the fifth inning.

Although both teams had a couple of threats, nothing changed until the eighth inning when Houston scored two runs to tie the game with a leadoff double by junior Tyler Bielamowicz, who was sent home on an RBI single by junior outfielder Lael Lockhart Jr.

Junior Blake Way came in big with a double to plate Lockhart Jr.

In the ninth, senior infielder Joe Davis gave Houston the lead on a leadoff home run followed by a three-up, three-down by junior RHP Fred Villarreal to end the game.

Houston was back in action Wednesday night.

The first two Cougars reached base and both stole base to get runners on second and third. Lockhart Jr. then sent home one runner on a sac fly to give the Cougars an early 1-0 lead in the first.

FIU hit a home run to start the second inning to tie it before redshirt sophomore starting pitcher Jared Pettitte’s throwing arm was hit by a line drive and he had to exit the game. Pettitte did not break his arm with the line drive but will need time to recover.

The Panthers then scored another three runs to jump out to an early 4-1 lead.

The Cougars threatened in the third as junior infielder Brett Esau, who finished 3-for-4 at bat in his first career start, hit a leadoff single followed by back to back bunt base hits by freshman Brad Burckel and freshman outfielder Johnathon Thomas to load up the bases. A sac fly by junior Jared Triolo sent in Esau to cut the FIU lead in half.

A combined effort by junior pitchers Brayson Hurdsman and Devon Roedahl shut down the FIU batters in the top of the fourth. Houston continued its momentum with a leadoff double by Esau.

Burckel, who went 2-for-4, beat the throw to first to reach safely and stole second as Esau scored off a passed ball to put Houston within one run. Sophomore Kyle Lovelace then sent Burckel home on a sac bunt to tie the game 4-4.

The score remained tied from the fifth to the eighth inning, with the last chance for the Cougars to win the game coming up.

To start Houston’s last inning threat, junior outfielder Kobe Hyland was hit by a pitch with one out and then stole a base. With the potential last out to send the game into extra innings, Bielamowicz hit a walk-off single.

The walk-off win marks the fourth of the season for the Cougars. Houston will look to improve in conference play this weekend as it faces No. 1 ECU at home.