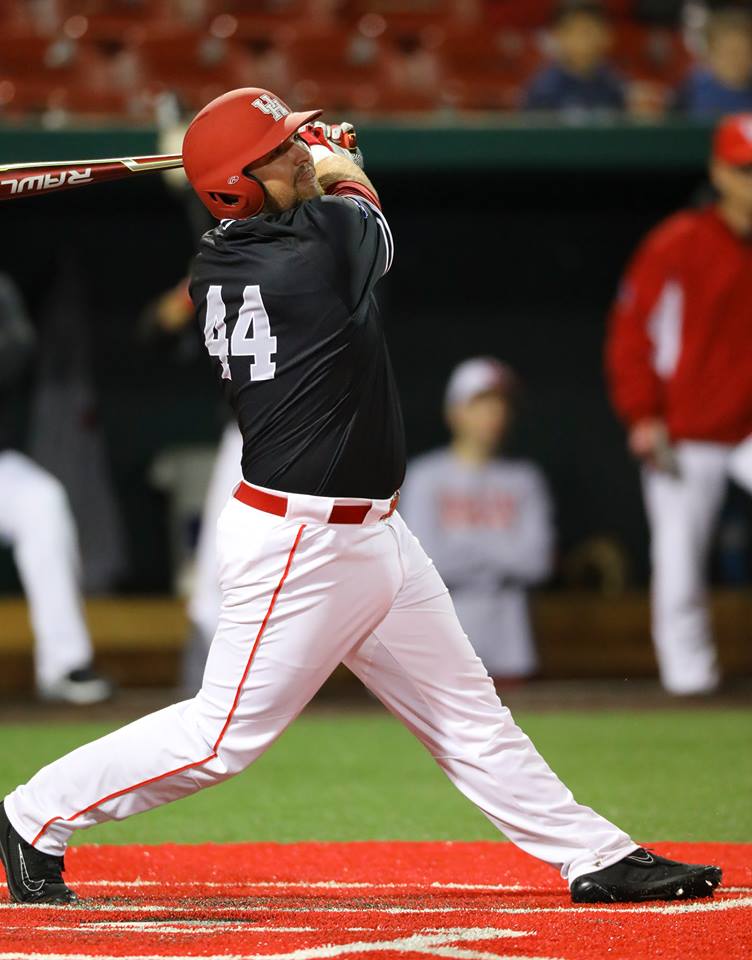 Senior Joe Davis hit his 15th and 16th home runs of the season over the weekend. His previous season high was 14 home runs in 59 games. He has played 36 games this season with at least 21 more to go. | File Photo/The Cougar

Houston improved to 6-6 in the American Athletic Conference with a series sweep against Wichita State.

Houston’s offense was clicking all series and scored a total of 27 runs across the three games.

The Cougars beat the Shockers 13-5 Friday and started the game when junior infielder Jared Triolo hit a double and senior infielder Joe Davis was intentionally walked.

Senior outfielder Rey Fuentes III and junior outfielder Tyler Bielamowicz sent the pair home with a pair of singles to make it four straight batters on base.

WSU plated a run in the third off of a sac fly, but Houston added to the lead shortly after when Bielamowicz worked his way to third base and scored off of a wild pitch to make the score 3-1.

The Shockers threatened in the fourth, but junior Lael Lockhart Jr., who recorded a career-high nine strikeouts, killed the threat and stranded two in scoring position.

The Cougars had a four-run fifth inning behind Davis’s two-run home run and a series of walks, singles and wild pitches to make it 7-1.

Another multi-run inning in the sixth for the Cougars made the score 10-1 off of a three-run home run by Davis that sent home Triolo and senior Grayson Padgett, who both singled.

The Cougars clinched the series with a 7-3 win Saturday and took another early lead after a failed pickoff attempt allowed Padgett to come home.

Starting pitcher sophomore Clay Aguilar was perfect for the first 11 outs and limited the Shockers to only three hits in five innings.

In the second, Triolo doubled to send home Lockhart Jr., and two runs were added in the third off of back-to-back singles by Fuentes III and Bielamowicz, who were plated on a two-out dropped fly ball.

The Shockers got on board off of a bases-loaded hit by pitch in the fifth and continued to threaten in the sixth as they plated another run to cut the lead in half.

Houston increased the lead in the eighth when junior Kobe Hyland doubled and freshman Brad Burckel and sophomore Kyle Lovelace each got a hit to send two runs in.

WSU fought back with one run in the bottom of the eighth, but another run added by Houston in the ninth increased the lead 7-3.

The Cougars struck first in Houston’s 7-4 victory Sunday. In the third inning, Houston scored its first run after Triolo got to base on a single and then Davis hit him home with a single of his own.

Houston added to the score in the fourth off a two-out double by Lovelace that sent home Hyland and continued the momentum through the fifth with an RBI single from Lockhart Jr.

Junior Sean Bretz took over for Hurdsman to end the fifth but not before WSU got on board.

The Cougars scored in the sixth off of a squeeze bunt by Fuentes III that plated Padgett — who reached on a fielder’s choice — to make it 4-1. WSU tied the game off a bases-loaded triple, but that was all in the seventh.

The Cougars regained the lead in the eighth when Bielamowicz scored on a wild pitch followed by freshman Derrick Cherry running home off an error.

The Shockers threatened in the eighth with the bases loaded, but Roedahl came in and got the last out of the inning.

Houston added to the lead as Padgett delivered Burckel on an RBI single. Roedahl closed out the bottom of the ninth, securing the sweep.