The 2010s were defined by change for the Cougars. They stumbled into conference realignment, went through more than a few head coaches and even upgraded to a plethora of new threads.

While some missed the mark (see: the 2013 Halloween unis and whatever this was), many combinations were fan favorites.

But don’t worry. We’ll show you the good ones only.

Here are our rankings of the Cougars’ best uniform combos of the decade: An all-white combination, Houston rocked their current white pants and white jerseys against Rice in 2018. However, they did so with a twist.

UH slapped their alternative Cougar logo on a white help, making it a chrome silver. With white socks and accessories, Houston won the rivalry game while looking icy in the process. – A.D. UH rarely ventures outside of red and white for its uniforms, but it should.

From the standard red lettering and numbers on a dark background to the subtle “H-Town” going up the pants, these black-on-black threads, show being worn against Washington State at NRG Stadium, are an exciting deviation from the norm.

Although two thing could have been done better: put on red lids and cleats. Fully embrace the black-red look that works so well. – J.R. Showcased on primetime television on Labor Day weekend against Oklahoma this year, this red-white-red combo is uncomplicated and almost elegant.

If setting up tradition is the direction UH is heading towards like the blue bloods of college football, this is the way to go. – J.R. Unlike some uniforms on this list, there is nothing symbolic about these, shown at Tulane this year. They are just a clean set of jerseys, pants and helmets.

Houston’s current uniforms, the all-white pants and jerseys with a double-red stripe on the sides of each is a tried and true look. The red helmet with the white UH logo adds some pop to the set. – A.D. To celebrate its 2018 Homecoming game against Temple, Houston unveiled uniforms that represented the 1968 and 1978 teams.

The Cougars wore red jerseys with white numbers outlined in navy blue. They wore white pants with navy blue and red stripes down the side. The all-red look, shown against East Carolina in 2017, remains standard in the Cougars’ game day wardrobe and one of the cleanest uniform combos in the nation based on color alone.

But these helmets put this combination over the top.

Much like the helmet worn at Rice in 2018, these chrome-on-red lids offers Houston’s threads that icy look and gives love to a modern Cougar logo that doesn’t get nearly enough recognition as it deserves. – J.R. To celebrate the 25th anniversary of Andre Ware’s legendary and Heisman-winning 1989 season, the Cougars took the field against the Green Wave in 2014 donning throwbacks similar to those worn in 2018.

Both featured the outlined numbers and the old school interlocked UH logo on the helmets.

Why is it ranked higher, you ask? Simple. Without the two white lines on the helmet, the bulky “HOUSTON” across the chest and white instead of gray face masks, these throwbacks are much less cluttered.

Plus, the stripes down the white pants gives a taste of the old red-white-navy colorway we haven’t seen regularly in over a decade. – J.R. 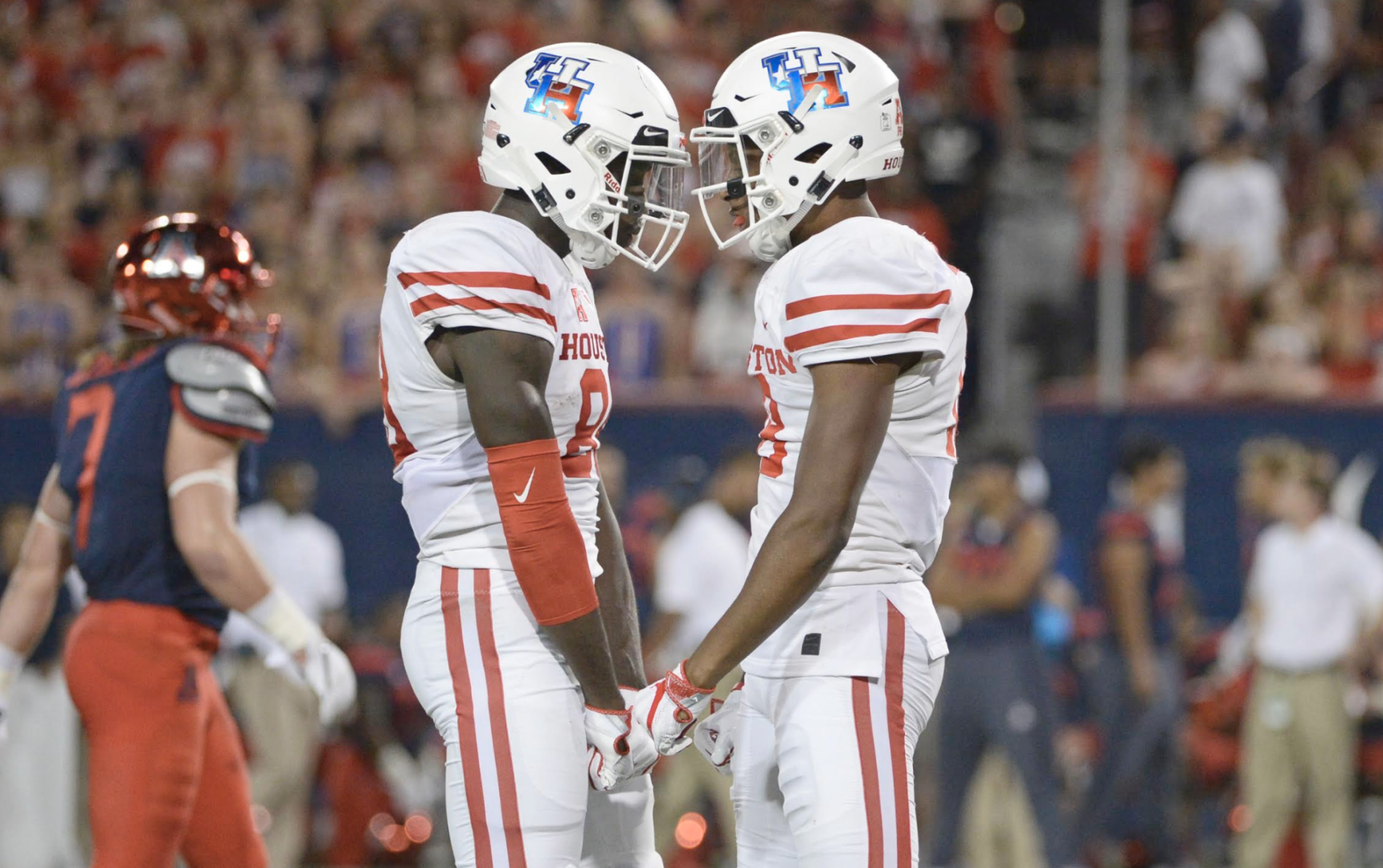 In response to Hurricane Harvey, the Cougars represented the city and state on the road at Arizona.

Not only did they have “Houston” on their chest as always, the UH logo had the Texas flag residing in it, while they also wore “Texas Strong” decals on the back of their helmets.

The all-white look pieces together a symbolic and aesthetically pleasing uniform. – A.D. The red chromed-out Cougar helmets make any uniform combo automatically better, but adding them to these charcoal kits with red accents worn against Memphis in 2017 produces some of the best threads in the country.

Like the uniforms worn against WSU in 2019, these are a sight for sore eyes after staring at red and white for over almost a dozen weeks a year.

If you aren’t looking for tradition and want to spice up a program that’s itching to evolve, à la Oregon, why not bring this rousing combo back? – J.R. A week after Houston rocked the Texas flag inside its logo against Arizona, the Cougars continued to respond to the disaster of Hurricane Harvey.

In a 2017 win over Rice, the Cougars came out with their all-red uniforms from top-to-bottom, a standard look. However, the kit was all but standard.

UH replaced the nameplates with “Houston,” in turn, both the front and the back had the city’s name on it, representing who the Cougars take the field for.  – A.D.