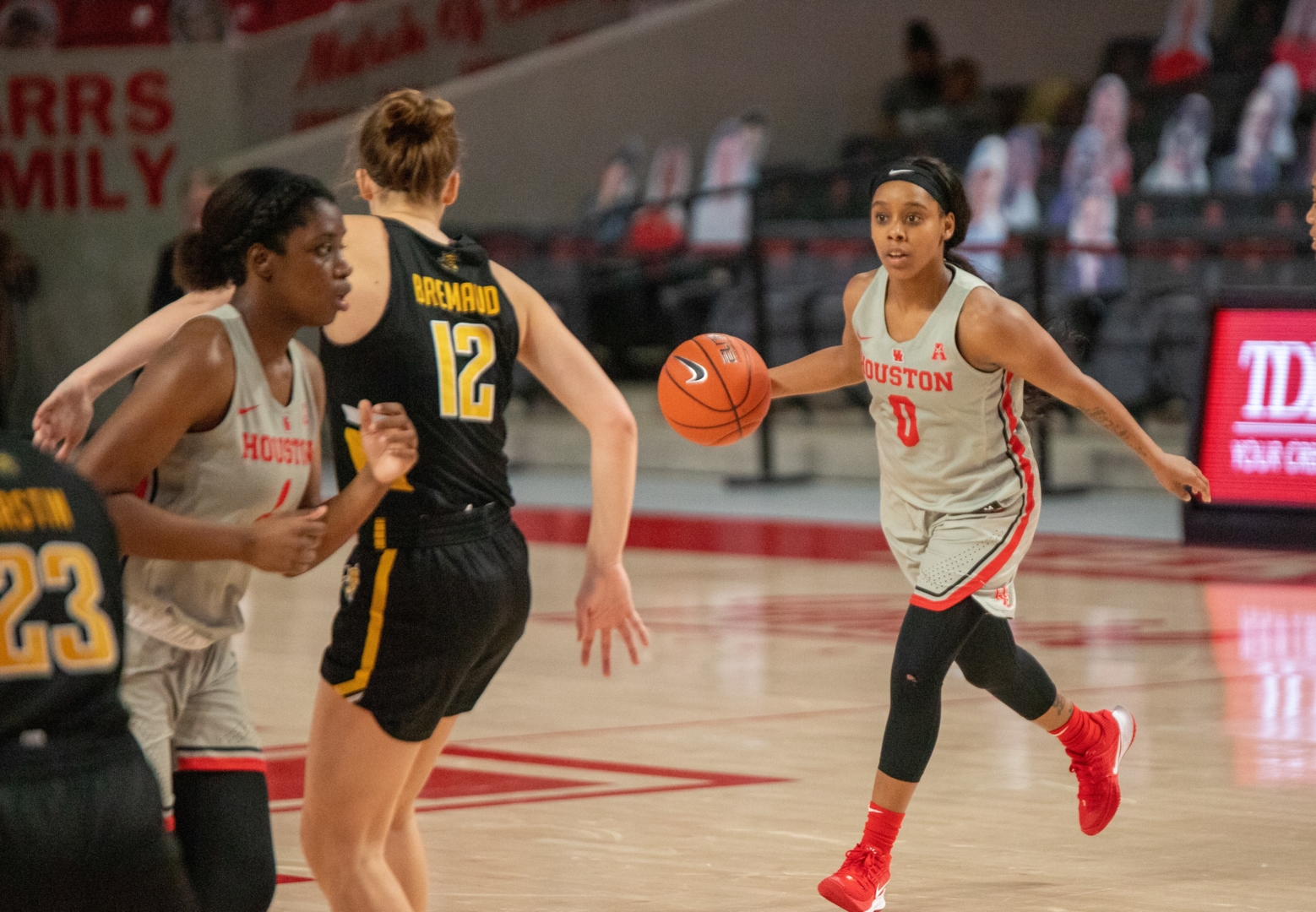 Guard Eryka Sidney dribbles the ball and scans the Wichita State defense in a regular season game on Dec. 30, 2020 at Fertitta Center. She led the UH women’s basketball team in scoring against UCF on Sunday with nine points. | Andy Yanez/The Cougar

The Houston women’s basketball team failed to stay perfect in American Athletic Conference play as it fell to UCF 55-46 on Sunday afternoon in Orlando.

The Cougars came into Sunday’s game on a four-game winning streak, including two straight against AAC opponents.

The first half was sloppy on both sides as the teams combined for 25 turnovers, including 14 by UH. The Knights and the Cougars both ran a full-court press for the majority of the first two quarters, and this led to quick shots, turnovers and a low score.

The Cougars led 23-19 at the half, the difference being the Cougars’ 5-of-11 shooting from beyond the 3-point line.

Senior guard Eryka Sidney, who shot 5 of 5 from deep in UH’s previous win against Wichita State, made her first two 3-point attempts against the Knights. She finished the game 3 of 5 from deep.

UCF was held without a field goal for the last five minutes of the first half but quickly turned it around once the second half began.

The Cougars struggled in the third quarter as they missed every 3-point attempt, turned the ball over another seven times, and relinquished their lead.

“We got a little tentative,” said UH head coach Ronald Hughey after the game.

He praised the pressure that UCF played with and mentioned how tough it is to win road games in conference play.

A buzzer-beater running layup from senior guard Julia Blackshell-Fair cut the Knights’ lead to one going into the final quarter of play.

The Knights pulled away in the fourth quarter as the Cougars continued to turn the ball over and struggled  shooting the ball.

The Knights shot 17 of 26 from the free-throw line, compared to the Cougars who were only able to shoot four free throws.

Hughey attributed this discrepancy to a lack of aggressiveness.

“We were playing on the perimeter and just passing the ball instead of trying to get downhill,” Hughey said. “(It) made us into a one-dimensional team.”

Turnovers and free throws proved to be the difference in the game.

The Cougars ended the game with a season-high 28 turnovers, and a season-low 46 points.

Neither team shot well the whole game as both were held under 40 percent from the field.

No UH player was able to score double-digits, but Sidney led the side with nine.

“You have to be better at your offense than they are at their defense, and today we weren’t,” the UH coach said.

The Cougars’ next game is in American Athletic Conference play as they take on Tulane on Wednesday at Fertitta Center.

“We need to have the mental and physical toughness down the stretch,” Blackshell-Fair said.  “We didn’t really play like us. The difference was really us stopping ourselves from what we do best.”