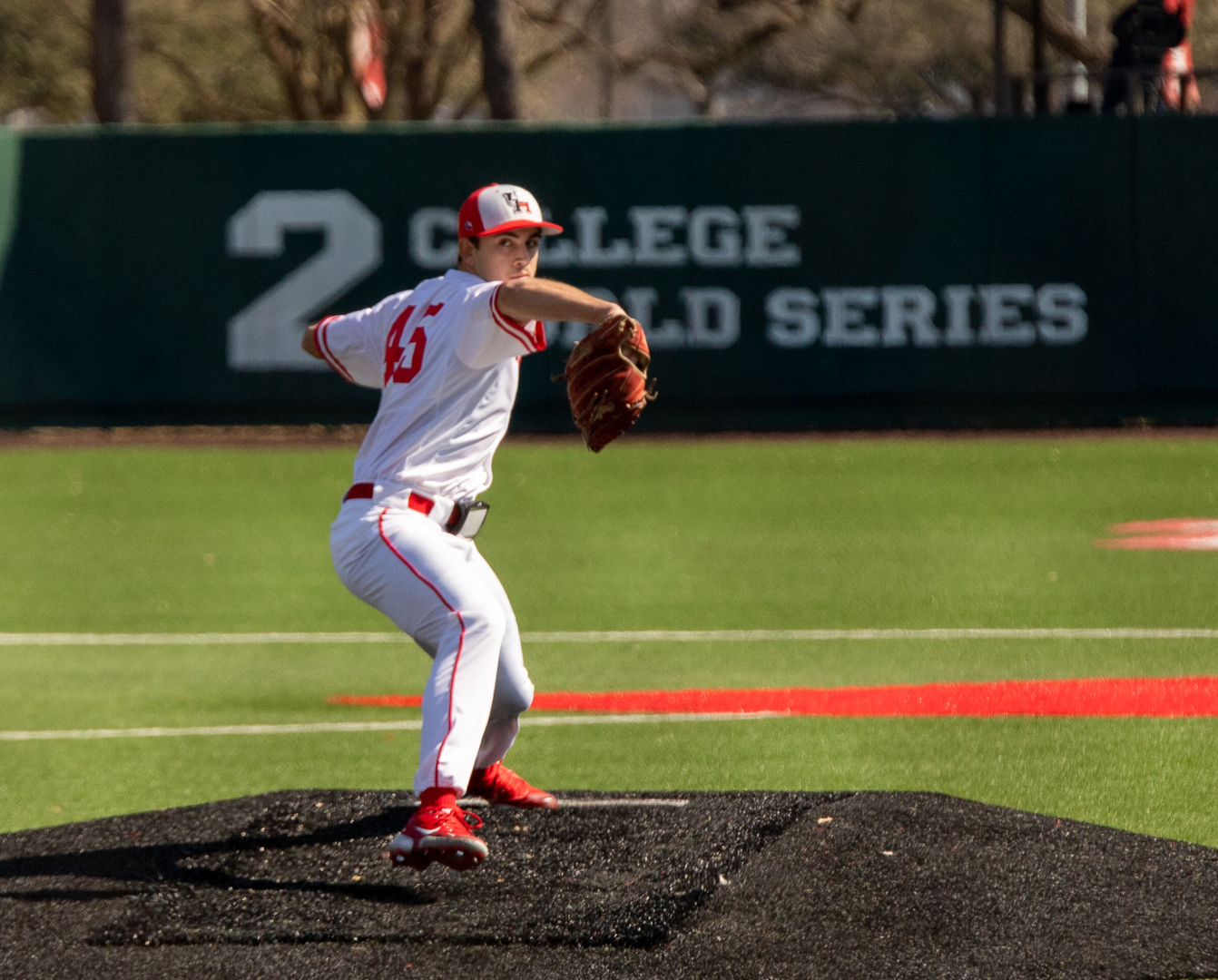 After the 2021 season opener was postponed due to the effects of the winter storm in Houston, UH baseball swept Texas Southern in a season-opening doubleheader Saturday afternoon at Schroeder Park.

It was a pitching show for UH in game one as junior Robert Gasser, who made his first career start as a Cougar, pitched five strong innings of one hit, seven strikeout baseball. TSU scored one run while Gasser was on the mound but it was unearned as it came as the result of a couple of UH errors.

Sophomore Jaycob Deese came out of the bullpen and made his UH debut. Deese was lights out, as the right-hander only allowed one hit while striking out seven in his four innings of work.

Offensively, junior catcher Kyle Lovelace got things going for the Cougars with a sacrifice fly in the bottom of the second to put UH up 1-0. UH added one more run in the inning to double its lead.

In the bottom of the fifth, junior right fielder Steven Rivas and junior first baseman Ryan Hernandez hit back-to-back home runs to extend the Cougars’ lead to 4-0. Both Rivas and Hernandez ended the game with two hits apiece.

UH added two more insurance runs in the bottom of the eighth thanks to a single by sophomore shortstop Ian McMillan.

Deese struck out the side in the top of the ninth to earn a save and secure a UH 6-1 victory.

Gasser earned the win for the Cougars and sophomore designated hitter Andrew Papantonis led the team with three hits.

Things started rocky for UH in the second game, as a throwing error allowed the first TSU batter to reach base and sophomore right-handed pitcher Ben Sears struggled to find his rhythm, leading to three Tigers runs in the top of the first inning.

The Cougars got a run back in the bottom of the first thanks to a Rivas double.

TSU scored a run in the top of the fourth to extend its lead to 4-1, but it was all UH after that as the bullpen did its job and the Cougars bats came alive.

Senior outfielder Tyler Bielamowicz started the comeback as he came in to pinch hit in the bottom of the fifth and delivered an RBI single. Two batters later, freshman catcher Dylan Post singled to center to drive in another run.

In the bottom of the sixth inning, sophomore infielder Brad Burckel doubled and then took advantage of a wild pitch and a throwing error to score and tie the game at four.

Rivas followed with a walk and then Hernandez delivered his second home run of the afternoon, this time a two-run shot to left field to put the Cougars up 6-4.

UH continued to pour it on in the bottom of the seventh, sending 10 batters to the plate and scoring four runs to extend the lead to 10-4.

Right-handed pitcher Layne Looney, who pitched three perfect innings of six strikeout baseball, capped off the ninth inning retiring the final three Tigers he faced to secure a 10-4 UH win and earn the save.

Senior pitcher Andy Belcik earned the win for the Cougars.