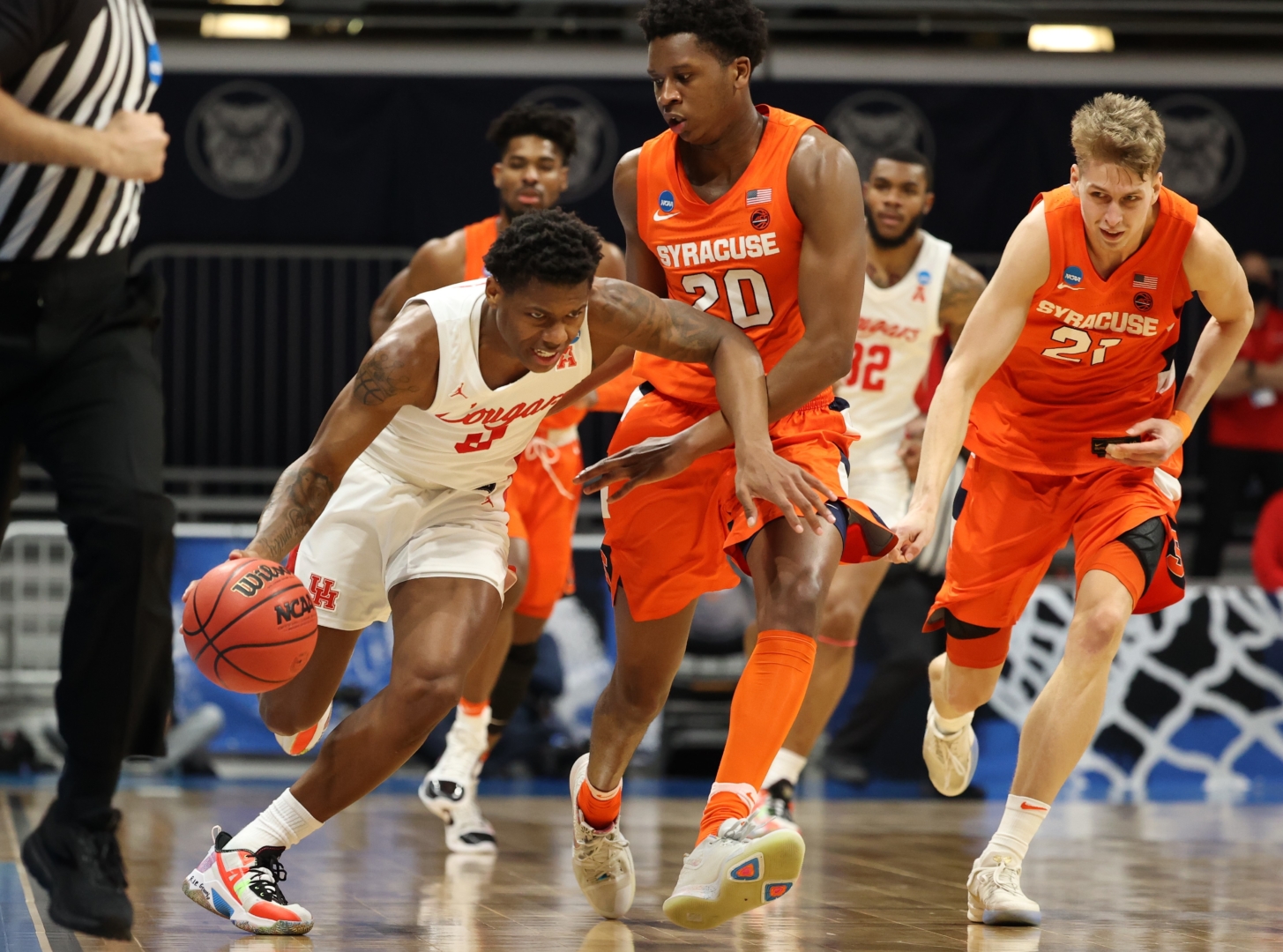 Syracuse plays UH in the Sweet Sixteen round of the 2021 NCAA Division I Men’s Basketball Tournament held at Hinkle Fieldhouse on March 27, 2021 in Indianapolis, Indiana. | Photo by Trevor Brown Jr/NCAA Photos via Getty Images

INDIANAPOLIS – The Houston men’s basketball team is heading to the Elite Eight after defeating the Syracuse Orange on Saturday night in the Sweet Sixteen at Hinkle Field House.

With the clock approaching the three-minute mark in the second half, UH senior guard DeJon Jarreau stole a bad pass and had an open lane all to himself. He jumped up and flushed the ball through the rim with two hands and hung on for just a second.

Syracuse called a 30-second timeout, but the UH fans that made the trip up to Indianapolis had started celebrating. After 37 years, UH was going back to the Elite Eight.

After a first-half of runs that saw both teams take turns riding the momentum, the second half played out like a back and forth duel.

Neither team gave up much ground, at times it seemed like UH was on the verge of blowing the game open before Syracuse answered and cut the lead to only a couple of possessions.

After a basket by freshman forward Kadary Richmond cut the Cougars’ lead to only four points, UH responded with a 9-2 run that put them up by double-digits.

With momentum teetering in favor of the Cougars, senior forward Justin Gorham hit a tough jumper in the paint through contact, which re-gave UH an 11-point lead, which proved to be the final nail in the coffin for Syracuse.

The talk of the week heading into the matchup against Syracuse was what the Cougars were going to do against the Orange’s signature 2-3 zone, but from the beginning, UH seemed poised and prepared against it.

The Cougars never seemed rushed against it, and nothing pointed that out more than UH going the first 11 minutes of the game without committing a turnover.

That changed, however, after the midpoint in the game when UH went on a scoring drought. After holding a 12-point lead early, Syracuse rallied with a 15-3 run to tie the game up.

During one of the timeouts, multiple UH assistant coaches were animated on the sidelines as they tried to start a spark for the team, and it seemed to be effective.

After a 3-pointer from Quentin Grimes and a 3-point play by way of the free-throw line from Gorham, the Cougars had gone up by six. Fastbreak points off a steal from Sasser and an emphatic dunk off alley-oop by senior center Brison Gresham saw UH end the half on a 10-0 run.

The Cougars will now take Oregon State in the Elite Eight on Monday for a chance to advance to its first Final Four since the Phi Slama Jama days.