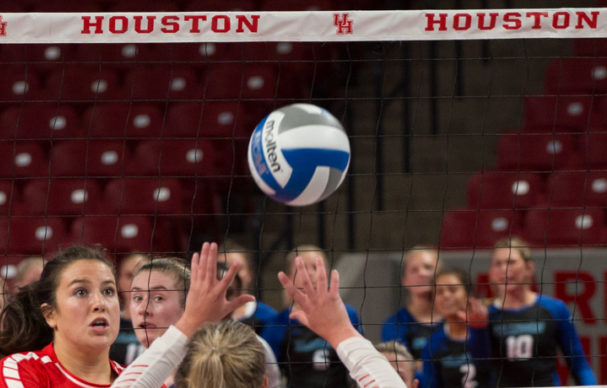 The UH volleyball teams American Athletic Conference Tournament run came to an end on Friday after Temple won three straight sets to get past the Cougars. | Trevor Nolley/The Cougar

Looking to advance in the American Athletic Conference Championship final, the Houston volleyball team fell short against Temple with a final score of 3-1 on Friday afternoon.

The matchup between UH and Temple was held at the Fifth Third Arena in Cincinnati.

Here is how the opening round transpired:

In the first set, the Cougars jumped out to a good start, taking the first set 25-18, however, Temple was able to come back and erase the Cougars’ one-set lead after just edging out the UH volleyball team with a two-point win.

That narrow victory proved to be a turning point in the third set of the match. The Owls came out with momentum and jumped on the Cougars early before running away with the set as they clinched it with a double-digit victory.

In the fourth set, Temple once again jumped out early, but the UH volleyball team stayed within striking distance until the Owls pulled away late to seal the 3-1 match win.

In spite of the loss, junior outside hitter Kortlyn Henderson led the team with 19 kills, followed by sophomore outside hitter Abbie Jackson with 12.

All in all, the Cougars ended its season (13-6, 9-2 AAC), and despite clinching the AAC west division’s top seed, they lost in their first matchup, falling short of capturing the AAC Championship.