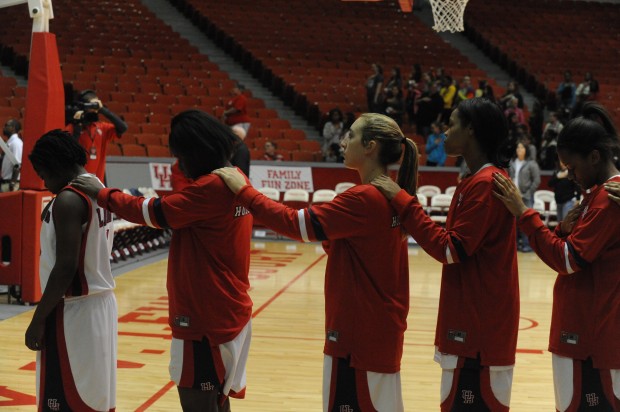 On her way out of Hofheinz Pavillion after a 74-61 victory against Texas State, freshman forward Jessieka Palmer told her teammate, freshman guard Alecia Smith that she loved her and would miss her during their four-day Christmas break.

“You’re only going to not see her for three or four days,”  said assistant coach Ravon Justice.

The Cougars have grown closer as a team during the past two weeks and it showed on the basketball court, said head coach Todd Buchanan after several players faced personal tragedies.

Freshman guard Bianca Winslow lost a grandmother. Senior guard Porsche Landry lost one of her best friends and one of her cousins was in a serious accident. Senior forward Destini Texada’s grandmother is deathly ill and freshman forward Yasmeen Thompson’s cousin was killed, Buchanan said.

“When you go through things we’ve gone through, and then not playing for two weeks it’s tough. We’ve gone through trials and tribulations as a basketball family, and for them to come back out here and put all of that behind them for three hours is something I’m extremely proud of,” Buchanan said.

“For all of that to go through and happen within a two-week period or less is pretty devastating. On a personal note, one of my close friends back in Kentucky had to take his wife off life support. It’s been a very trying — to say the least — two weeks.”

Still, the Cougars had to take the court, where they made their coach proud.

One such player was Smith, who finished with a career-high 24 points. Smith played with guts and savvy, Buchanan said. She was given the green light to shoot freely once she got hot from the field and rewarded the team with a propensity to hit the big shot. With 7:44 remaining in the second half, Texas State Freshman guard Erin Peoples drained a
jumper that brought UH’s lead to single digits. Smith responded with a 3-pointer that pushed the lead to 11.

“Not only did she have 24 points, but she put the team on her back. She had crucial shots when we needed them most,” Buchanan said.

Their backcourt tandem and pace carried the Cougars to victory. Landry and Smith combined for 45 points and 13 rebounds.

“(Smith) stepped up big and had a lot of big shots when we needed buckets,” Landry said. “Her maturity level is high right now. She played well.”

The Cougars had a tough time dealing with the Bobcat’s zone defense in the second half and it slowed them down. After scoring 45 points in the first half, the Cougars scored only 29 in the second.

“(Their zone defense) threw us off balance for a while, but once we got the hang of what our coaches wanted us to do, we were able to hang onto the lead,” said junior forward Marissa Ashton, who scored 14 points and grabbed 11 rebounds.

In the wake of what happened during the past two weeks, the game was bigger that just a sports competition, Buchanan said.

“We as coaches don’t just teach basketball. We try to teach and coach the game of life. It’s all about faith and it’s all about family,” Buchanan said.