Business program steps it up

The UH Bauer Internal Audit Program has become the third in the nation and sixth in the world to be recognized by the Global Institute of Internal Auditors as a Center of Excellence. 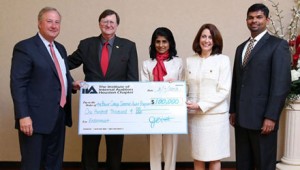 The Bauer Internal Audit Program achieved the honor as the “Center for Internal Audit Excellence” and received $100,000 to create an endowment fund. | Courtesy of UH.edu

The IIA, an organization with chapters around the world, represents internal auditors and encourages internal audit courses in educational institutions. It presented the Department of Accountancy & Taxation at the C.T. Bauer College of Business with $100,000 to create an endowment to secure the program’s success. The Houston Chapter of the IIA hosted a dinner on March 7 at the Houston Racquet Club to celebrate the college’s achievement.

“Our vision is to further assist UH in attracting top students to meet the growing needs of the Internal Auditing profession in Houston by creating a scholarship endowment for their Internal Audit Program,” said Houston IIA President Larry Abston in a press release.

The endowment will go toward scholarships as well as internal audit associations and programs, said Vice President of Students Relations for the Internal Audit Student Association Erin Neely. Supporting associations such as this one is key in getting students involved and interested in the internal audit profession, she said.

“Participating in the (International Auditing Education Partnership) program identifies University of Houston as a forward thinking university that recognizes the importance of the internal audit profession as a career choice,” said Academic Relations Committee Chairman of the IIA Harold Silverman in a letter to Michael R. Newman, director of accounting programs at Bauer.

The UH Bauer Internal Audit Program has the distinction of being the first IAEP program to be recognized as a Center program since the IIA academic relations program was reengineered in 2005, Silverman said in the same letter.

“Our program is actually the first to be voted on by the IIA,” Newman said. “The other schools were grandfathered in.”

Although auditing courses were offered sporadically in the 1980s, funded by the IAA, the program took off in 2003 in the hands of professors Jim Pratt, Michael Parks, Thomas Noland, Jim Stinson, Gerry Lobo and George Gamble.

“The professors are really the stars within the program,” Newman said. “They are the ones that keep it going and improving everyday.”

The demand for skill sets in the field boomed after the passage of the Sabanes-Oxley Act in 2002, a U.S. federal law that established new or improved standards for U.S. public company boards, management and public accounting firms. These new regulations increased the independence of outside auditors who review corporate financial statements and increased the role of boards of directors Newman said.

Newman said that what the program is today is the result of the efforts of several leaders.

“The IIA not only helps us financially but it also supports us by bringing in speakers, volunteers and giving advice, among other things,” Newman said. “They are a phenomenal group of people that has given a lot to our professors and students.”

The UH Bauer Internal Audit Program recognition as a Center of Excellence has proved to be key in promoting and giving continuity to the internal auditing career in Houston.

“The profession of internal auditing must sustain itself by ensuring that highly-qualified students are ready and available to enter our organizations,” Peppers wrote in a message to Bauer Dean Latha Ramchand, Chair of the Department of Accountancy & Taxation Kaye Newberry and Newman.

“This new designation indicates that the University of Houston Bauer College is doing just that.”