With young squad, UH has chance to grow next season 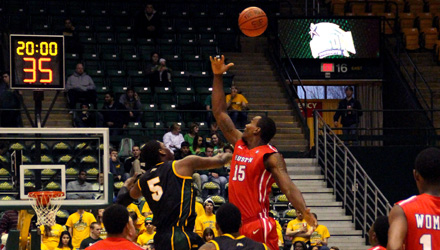 Forward Leon Gibson (no. 15) is the Cougars’ lone senior this season. Their top four scorers are freshmen or sophomores. | Courtesy of John Irwin/Connect2Mason

The Cougars’ loss to George Mason in the second round of the College Basketball Invitational could be a microcosm for the entire season as they were down by 19 in the first half before rallying to force overtime and eventually losing 88-84.

While the Cougars made some encouraging progress and achievements, they failed to live up to their potential.

UH entered the year with lofty aspirations, its high hopes fostered by a recruiting class that media outlets Rivals.com, Scouts.com and ESPN ranked 10th, 13th and 20th respectively in the nation. The centerpieces of the incoming class were forwards Danuel House and Danrad “Chicken” Knowles, both highly touted athletes on the national scale.

House produced at a high level for the Cougars and eventually became the first player in school history to be named Conference USA “Freshman of the Year.” Knowles, however, never suited up for a game because he was declared ineligible to play before the season. The 6-foot-10 forward hopes to rejoin the Cougars for the upcoming season, but his absence is just another adversity faced this season.

“There were some good things that happened, but the biggest problem (in the 2011-12 season) with our team was we were inconsistent,” Dickey said.

That inconsistency happened again this year, plaguing the Cougars and leaving fans wondering what could have been.

After ripping off five straight victories to start the season, UH faltered, losing to Prairie View A&M on the road and to Texas A&M at home by 12. The Cougars drew five nationally televised games this season, but failed to maximize the opportunity.

After righting the ship by finishing out December with six straight wins against a soft nonconference schedule and clobbering conference rival SMU by 11, the Cougars fell victim to their struggles with inconsistency, losing four straight in C-USA games, two of those within the friendly confines of Hofheinz Pavilion.

UH spent the next three weeks alternating wins and losses with conference opponents, culminating in a triple-overtime loss to Tulsa that preceeded two additional losses to Memphis and Tulane.

Thomas stated his goal and hope for the team in the upcoming season.

“I want to leave Conference USA with a bang,” Thomas said. “I want everybody to remember that we did something special before we left.”

The Cougars’ second-round exit to rival UTEP, losing by 11 after trouncing the Miners by 18 less than a month prior, but the College Basketball Invitational offered a final opportunity to make the sort of statement Thomas wanted the team to make.

Playing at home against old Southwest Conference rival Texas, the Cougars made that statement.

Thomas notched his team-leading 15th double-double of the season against the Longhorns and four of the five Cougar starters scored in double figures in the thrilling one-point victory over Texas, sealed with a last-possession jumper by House that put away with Longhorns.

Then the Cougars went on the road to VA and failed to score a point in the first three minutes and 20 seconds of play against the Patriots to go down 17-0 in the contest. Inconsistency is not just a problem for this team, it is a hallmark.

UH will return the squad for next season, except senior forward Leon Gibson. Freshman center Valentine Izundu, sidelined late in the year by nagging injuries after showing promise on the defensive end, will return ready to contribute meaningful minutes for the squad.

Redshirt sophomore guard Joseph Young, House and Thomas — the leading scorers this season — return as well, as the Cougars leave behind another conference to move to the soon-to-be-renamed Big East.

Knowles will also join the Cougars as they try to compete for a conference championship.

The true test for UH and Dickey is turning the promise that the Cougars showed by defeating Texas for the first time in 13 years into wins. The proof would be a trip to the NCAA Tournament and a chance to compete for a national title.