A new speaker and speaker pro tempore have taken their seats for the 50th SGA administration.

Business graduate Sean Tarver served his last night as Speaker at the previous senate meeting on April 3, and finance and accounting sophomore Sebastian Agudelo was elected with a unanimous vote in favor with two abstentions Wednesday. 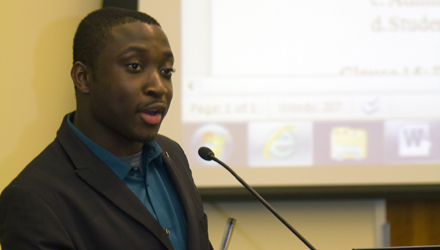 “I was talking to Cedric once and he told me the rules and I told him this position is perfect for me,” Agudelo said in the senate meeting.

“I want people to be more familiar with what important things you need to know about the bylaws. I want to make it more interactive and efficient, and encourage debate and discussion.”

Carol Ann Ross, a graduate in the college of social work, was the only senator nominated for speaker pro tempore.

“I want to make sure things that happen between the meetings, like educating freshmen senators and … spending more time talking about the content of the business rather than straightening things out,” Ross said.

Ross was elected unanimously without any abstentions.