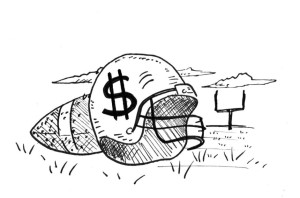 As Cougars, it is pretty much a requirement to attend at least one football game. Being in the stands with other Cougars who have the same sense of unwavering enthusiasm for our team makes us feel connected in some way. This experience is priceless, but there are some people who believe there should be a price placed on this activity.

Some argue that because people pay to attend the school’s athletic functions, the team should receive some kind of financial compensation for filling the stadium or stands.

In a recent controversy about Texans running back Arian Foster, he admitted in an upcoming documentary that while playing football at University of Tennessee, he received money on the side — which is against NCAA policies.

Though Foster did not expand on the specifics during his interview, he did say that after one game, one of his coaches brought him and a few of his teammates 50 tacos after Foster complained about not having enough money to buy food.

Philip Fulmer, former head coach of the Tennessee Volunteers, denied these allegations in a statement to The Associated Press.

“As the head coach at Tennessee for 17 years, I took great pride in having a program that was NCAA-compliant, as did our staff and administration,” Fulmer said. “If we knew of a violation, big or small, we reported it.”

In this documentary, Foster repeatedly said he doesn’t believe anything is wrong with college athletes receiving money — he believes the NCAA should pay the athletes. Foster brings up the idea that playing college football is similar to having a part-time job, and athletes should get paid for the time they put in.

Creative writing and political science sophomore Monica Hindmon said she agrees with Foster about college sports being a job.

“They bring in so much money for the college with the tickets, merchandise, advertising and fundraising that they do,” Hindmon said.

Hindmon also proposes an alternative to just paying the athletes.

“If college athletes were to make money, I’d like for them to make it independently on autographs and merchandise and all of that that they’re selling,” she said. “I mean, besides a stipend or more scholarships, I think it would be really unfair for them to receive money from the school.”

In an article by Forbes Magazine, contributing writer Jeffrey Dorfman said he believes that athletes already do receive money in different forms.

“At the bigger, more successful universities, athletes also receive academic counseling, tutoring, life-skill training and even nutritional advice,” Dorfman said. “Beyond that, however, what is commonly overlooked is that student athletes also receive free professional coaching, strength and fitness training and support from athletic trainers and physical therapists.”

According to the NCAA website, Division I and II institutions are permitted to provide a student athlete with tuition and fees, room, board and required course-related books. However, the NCAA is quick to assure that a small percentage of high school athletes are awarded athletic scholarships, so academic scholarships are recommended.

If college athletes are unable to receive athletic or academic scholarships, there is always the option of taking out a student loan to pay for expenses.

Nothing athletes do is considered easy or unworthy of praise, but they should not be held at a higher value than other performers at UH. Students in theater, dance and other crowd-based performances receive no payment. The crowd is typically not as large as the crowd at a football game during a winning season, but this does not negate the fact that these performances are also bringing in money for the school.

Anything important that anyone wants to pursue is going to be time-consuming and difficult. Some college athletes aspire to make it to the professional level. Because college football is a stepping stone to reaching a student athlete’s dreams, it should not be a paid job — it should be thought of as an athletic internship.