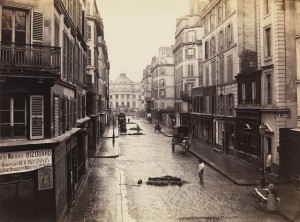 “I love black and white photography,” fine arts senior Daphne Oberhausen said as she flipped through the pages of a picture book.

The book she’s flipping through is Marville, which contains many images of the 19th century French photographer Charles Marville. These images are currently on display at the Museum of Fine Arts Houston, which opened on June 15. The exhibition is also the first of Marville’s work to be displayed in the United States, which has so far only been viewed at the National Gallery of Art in Washington and the Metropolitan Museum of Art in New York.

“We are especially lucky to be able to present this exhibition,” said Malcolm Daniel, the MFA’s curator of photography. “The curators have gone to great lengths to bring together the very best surviving prints of Marville’s most compelling images, so we are seeing the artist at his very best.”

Museum visitors will find that many of the images were printed on salted paper, which was one of the earliest paper photographic processes. It consisted of a sheet of fine writing paper coated with salt water, silver nitrate, and forming light-sensitive silver chloride.

“The result is a matte-surface print in which the image was embedded in the fibers of the paper,” Daniel said. “By the mid-1850s, most photographers, including Marville, made albumen silver prints for which the paper is first coated with an egg-white solution that gives a harder surface, a crisper image, and a shinier print.”

“Some of the photos show Paris (as) it was before Georges-Eugène Baron Haussmann, who helped imagined a modern Paris and changed a lot about the way the city looked now,” said French lecturer Rachel Early.

Haussmann and Napoleon III were responsible for the changes throughout Paris. Under Napoleon III, Marville was chosen to be the official Paris photographer. Daniel said that Marville considered himself a photographic artist.

“Even when producing work for documentary purposes, he sought to do so as an artist,” Daniel said. “His sense of composition and light, and his immaculate technique that reveals such richness of detail allows us to immerse ourselves in a Paris of the past, to feel what the city looked like, what life was like in pre-Haussmann Paris.”

Early added that in the past, the streets of Paris were very narrow, which Marville captured in his photos.

“It’s such an old city, it’s a medieval city,” Early said. “But then you had Haussman really open up some of the streets. Now you have these boulevards when you go to Paris. What we see now is not what they would’ve seen in Marville’s day. I think this is fascinating and the photos are gorgeous.”

“Charles Marville was clearly a sophisticated artist in shaping his pictures and a consummate master of technique,” Daniel said. “He also was blessed with a great gig, working for the City of Paris beginning in 1862 and charged with photographing the old parts of the city one step ahead of the wrecking ball.”

Early said she will recommend her class visit the exhibit if they have time.

“We are studying Paris in our class and I think that part of what make Paris so special, especially to Americans, is the layers of history that are present,” Early said. “In some ways, Paris has changed a lot, but you can see parts of buildings, such as the Notre Dame Cathedral, that have been around for centuries. Seeing the history of this city is very valuable just for understanding how different it is from American cities.”

Emphasizing the different periods of history as it relates to French literature is part of Early’s lesson plans.

“I think the exhibit helps bring that to life,” Early added. “If we talk about the Romantic age, the 19th century, it can stay kind of abstract. But seeing images of Paris as it was at that time helps (make) it a little more concrete and bring it back to life.”

Oberhausen, a student of Early’s Intermediate French class, said she would visit the MFAH to view the Marville exhibition. “I like the architecture,” she said. “I like how he captures the landscapes and the finesse of France.”

“I hope that for whatever reason people come to the exhibition, one of the things they will take away is the discovery of how beautiful, technically perfect, and historically evocative photography could be so early in its history,” Daniel said. “For us, 150 years later, there are many ways into the photographs — an interest in early photography, an interest in urbanism and city planning, and a nostalgia for a lost way of life, and an appreciation of the sheer beauty of the pictures.”

The exhibition will run until Sept. 14th and is included as part of general admissions. On Thursdays, admission is free to the public. For more information, visit www.mfah.org.