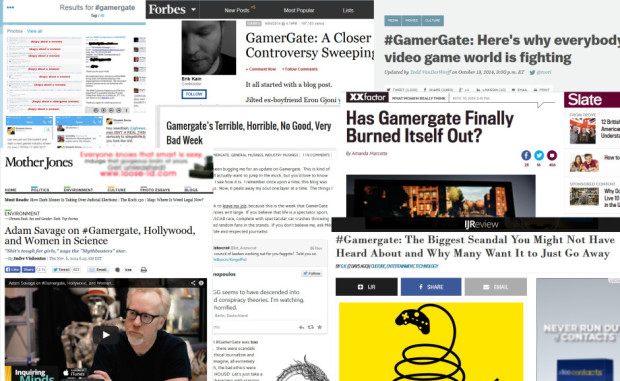 The gaming world is in an uproar, and it is now seeping into the public eye. As threats against women in the gaming industry become more serious, causing several women to leave their homes, women’s rights activists and other supporters argue that gaming culture needs to carve out a safer space for women and other marginalized groups.

This movement, known as #GamerGate, gained traction in August and has recently come to the attention of the general public after conservative actor Adam Baldwin tweeted in support of the movement.

According to Vox, #GamerGate is essentially about two core aspects: ethics in gaming journalism and the treatment of women in gaming.

Gamers argue that #GamerGate is not about misogyny, but rather the disconnect between what gamers want to read and what gaming journalism actually is. Gamers argue that journalism has become too left-leaning and that a balance has been lost, particularly as journalists’ critiques about games address social issues.

Though it may seem like a battle for the world of gamers, the politicized nature of this movement gives way to implications that seep into other areas of our culture, where women and other marginalized groups face issues of visibility and inclusion. English senior Jesse Castanon, once an avid gamer, said that representation of women in video games has long been a problem in gaming culture.

“In most video games, women are hypersexualized. They are not created the (same) way as male characters,” Castanon said. “There is definitely not equality in the way that they’re perceived. The girl needs (the male character) and depends on him.”

Those who are part of the #GamerGate movement argue that they would rather read reviews of the game itself without evaluations of its social factors. Another heated debate that is creating a divide between gamers is journalists is defining what exactly a game is, as journalists are reviewing games that appear to be artistic in nature.

The series of violent threats and misogynistic comments fired at women began in August when game developer Zoe Quinn’s ex-boyfriend Eron Gjoni wrote a lengthy blog post accusing Quinn of cheating on him with a game critic in order to secure positive reviews for her game.

Given that some gamers were already miffed that Quinn’s game could even be considered a game — it’s structured differently, more like an interactive novel  — Gjoni’s post sparked outrage that had been boiling below the surface.

In addition to Quinn, YouTuber Anita Sarkeesian and game developer Briana Wu have already received violent threats. All three women have gone into hiding for fear of their safety, and as threats have become incredibly serious, the FBI is now conducting an investigation.

“It’s crazy that people are reacting this way toward these women,” Tran said. “I think they’re going too far.”

It is understandable that gamers may be frustrated that games are not reviewed within the context of the game itself. When playing games for enjoyment, one may not want to read about surrounding social and political implications, but rather a review that details the specifics of the game as a game.

It is true that at the heart of #GamerGate is mistrust between readers and gaming journalists, but there is no denying that it is a problem, and women are caught in this crossfire.

“(#GamerGate) could become a part of a bigger social culture,” Castanon said. “Gaming is a big part of the social culture for young people; you see people play video games religiously.”

Castanon adds that this reaction toward women comes from deficiencies in social interaction.

“I used to play World of Warcraft through middle school and high school, and a lot of people would say derogatory stuff toward women,” Castanon said. “People were socially inept and didn’t know how to be in society outside of the game, so it affects them socially. They spend their social time on games — it warps their perception.”

Discussions of gaming culture used to come with the assumption that gamers were straight, white males, but that is no longer the case. Because the gaming community has expanded to include other groups, their lack of representation and any insensitivity towards these groups portrayed in games becomes a problem.

Perhaps not all who support #GamerGate are crazy misogynists, but many have started to blame women for their discontent, and that needs to be remedied. Certain publications may want to focus only on reviewing games within the criteria of it being a good game, while other publications serve to evaluate games from a social and cultural perspective.