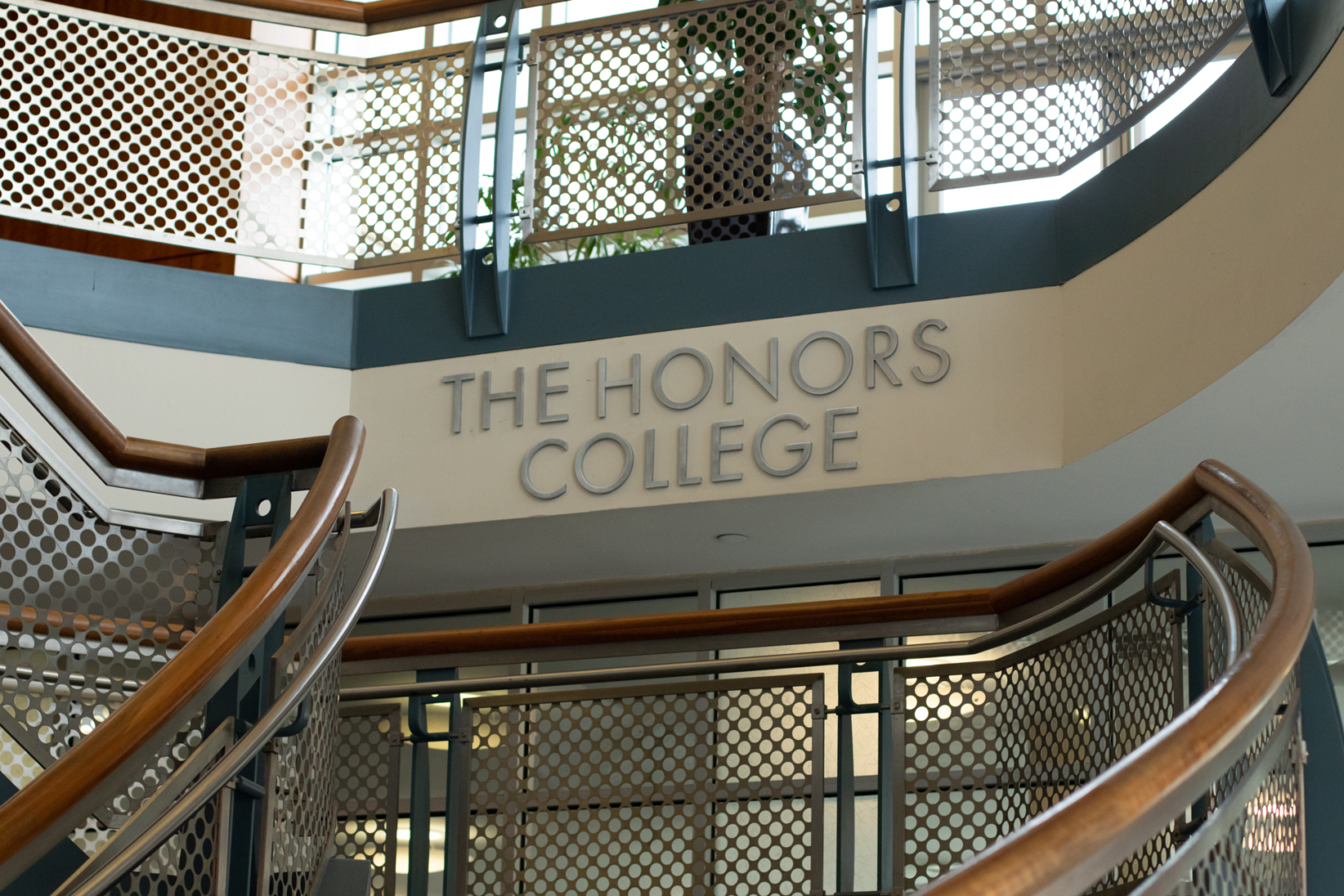 The Honors College was meant to be built in the Quadrangle, but instead was built as a wing in MD Anderson Library. | Kathryn Lenihan/The Cougar

Since the Honors College was established in 1993, creating change and making history has been the goal.

The latest addition to the college’s history books is the talk of some new minors. Global Engagement & Research along with Data & Society will be offered as a minor as early as Fall 2020. Both minors still must receive final approval through the provost’s office.

“One job that an honors college can do to serve a university is to help animate the spaces between the disciplines,” Honors College Dean William Monroe said.

Honors professor Daniel Price will be the director for the Data & Society program when it is implemented.

Originally, there was a Committee on Honors Courses and Graduation with Honors in 1947, which was considered the first mention of honors at UH. This soon became Honors Program Committee.

Although there has been an increase in enrollment in recent years at the Honors College, according to the Houston History magazine, some students still see the benefits of small teacher to student ratios within their Honors classes.

“The classes we take for Honors are a lot more intimate because it’s very one on one with the teacher and there are a lot of discussion classes,” said biomedical sciences senior Shelbin Mattathil.

Most of Mattathil’s social group comes from the Honors College after they all met at a retreat their freshman year.

The Honors College every year has an overnight retreat at Camp Allen in Navasota before the fall semester begins.

All students at the Honors College go through in completing a course over two semesters called The Human Situation. Part of the coursework is examining texts from different cultures and interpretations of cultural traditions.

“I wasn’t too interested in reading before college, and the entire theme of my class so far has really changed my mindset and the way I think about things,” said computer science sophomore Neeriyah Butler about The Human Situation. “It changed my perspective on life too, it’s opened me to something I’m not really used to.”

David Rainbow has taught The Human Situation since 2015 and said one of the great things about the Honors College is how it is integrated into the entire University.

“We have students from every other college and probably every major, which makes our classes full of interesting perspectives,” Rainbow said.

Many programs and organizations stem from the Honors College: Bleacher Creatures, Club Theater and Honors Ambassadors being among just some of the student organizations that are offered to those in the college.

The Honors College’s mentorship program began in 2010 and acts as a way to group incoming honors students with upperclassmen.

“Until this semester, I didn’t really have anyone that I was close within the Honors College,” Butler said. “But, I think I’ve been encouraged to join an organization to be more connected with the Honors College.”

Originally, the Honors College was meant to be built in the renovated Quadrangle, but in 1999 plans were announced that MD Anderson Library would build a new wing to house the college.

Under Monroe, the Honors College has had several landmark accomplishments, including the granting of the Phi Beta Kappa chapter, which was one of Monroe’s favorites.

“The University had been seeking a Phi Beta Kappa chapter for almost 30 years,” Monroe said. “This is a typical timeline.”

The University applied for the granting of the chapter five times and the successful application began in 2012 where it was approved by a council in 2015, Monroe said.

With the new additions to the Honors College over time, to the now seven minors that are offered to students, Monroe said change was a goal of the college throughout the years.

Monroe quotes his predecessor, Dean Ted Estess who directed the program in 1977, who believed the Honors College was a leader on campus.

“It’s always about the larger institution and the Honors College leading the way,” Monroe said. “‘The (tip) of the spear’ is the desire to be the leading edge of the University and getting better.”