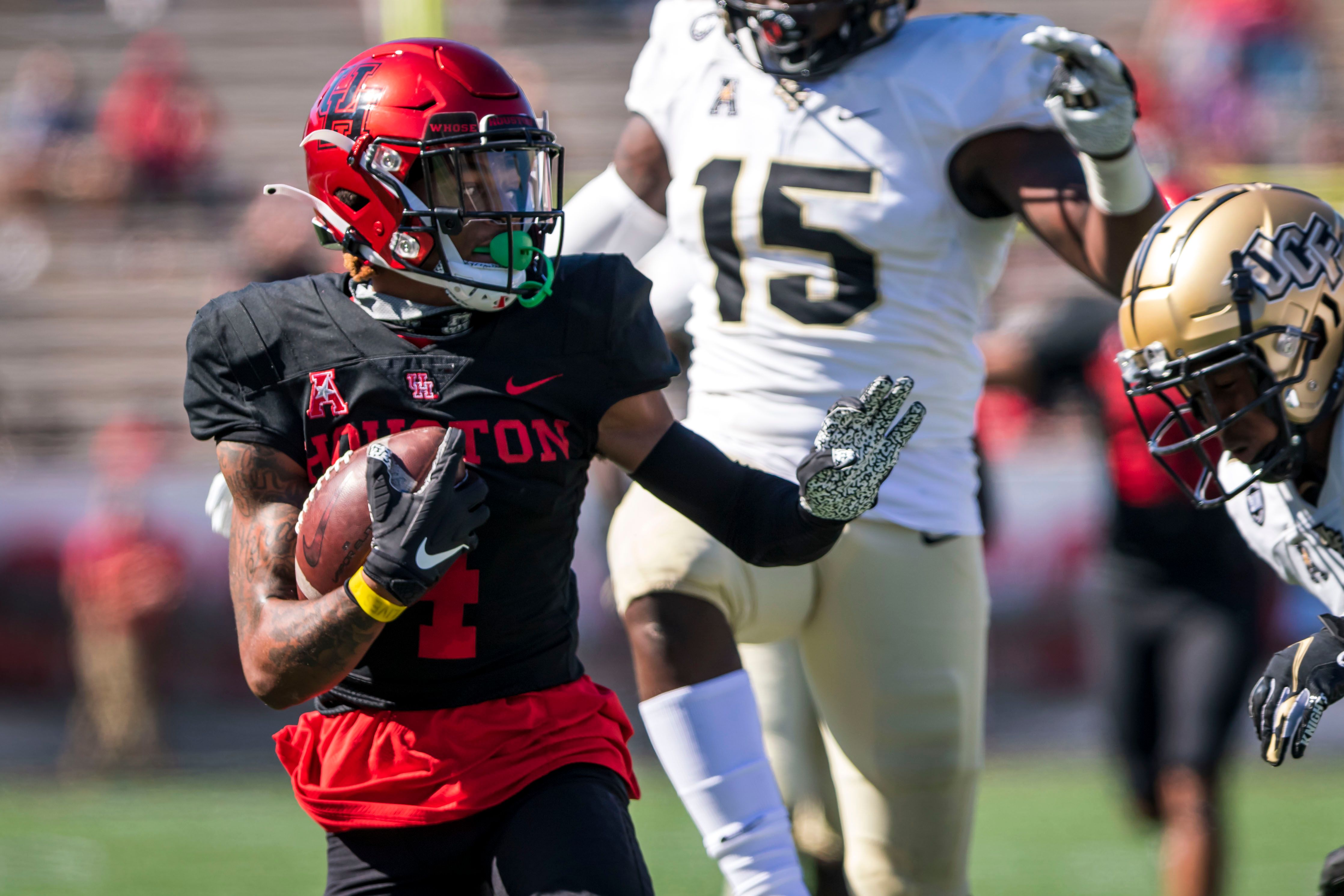 UH football receiver Nathaniel Dell looks for the UCF defender and prepares to attempt a stiff arm to avoid being tackled. The game took place at TDECU Stadium during the 2020 season. | Courtesy of UH athletics

A disastrous first half for Houston was too much to come back from as the Cougars fell to the Hawai’i Rainbow Warriors 28-14 in the New Mexico Bowl that was relocated to Frisco on Thursday.

The Rainbow Warriors (5-4, 4-4 Mountain West Conference) defense made a statement early, picking off junior quarterback Clayton Tune on the Cougars’ (3-5, 3-3 American Athletic Conference) third play from scrimmage to set up Hawai’i inside the UH 10-yard line.

Sophomore quarterback Chevan Cordeiro wasted no time getting Hawai’i on the board, as he connected with freshman running back Dae Dae Hunter on a 3-yard touchdown pass to take an early 7-0 lead.

After a second Tune interception in the first quarter, Cordeiro hit senior running back Calvin Turner down the field for a 75-yard touchdown pass to extend Hawaii’s lead to 14-0.

A series of punts followed before an 80-yard drive from the Rainbow Warriors, capped off by a Cordeiro 4-yard touchdown pass to sophomore tight end/defensive lineman Jonah Laulu and extending the lead to 21-0.

UH struggled to find rhythm offensively heading into halftime, managing to rack up only 87 yards of total offense, was forced to punt six times and turned the ball over twice.

The Cougars started the second half on the right foot, running a 17 play, 75-yard drive in 7:21 as Tune found sophomore wide receiver Nathaniel Dell in the endzone for a 7-yard touchdown pass to cut Hawai’i’s lead to 21-7.

After a quick three-and-out, UH drove down the field through the air as Tune connected with junior tight end Christian Trahan on a 26-yard touchdown pass to make it a one possession game at 21-14.

Just as the Cougars found themselves in momentum, the Rainbow Warriors responded as Turner returned the ensuing kickoff for 92 yards, putting Hawai’i up two scores again at 28-14.

After another Tune interception and a Hawai’i missed field goal, the Cougars struggled to regain momentum from their dominant third quarter, as Hawai’i’s defense returned to its first half performance.

The Cougars took the field missing multiple players on the roster, including key seniors linebacker Grant Stuard, defensive lineman Payton Turner, and wide receiver Grant Stuard, all who decided to opt out and declare for the upcoming 2021 NFL Draft.

UH’s season began full of question marks, going weeks without knowing when its first game of the season would be played.

Multiple postponement spells, performances full of potential and games filled with drama led by a quarterback in his first full season as the No. 1 guy.

The Cougars’ season was truly defined by the effects of the current COVID-19 pandemic, coming to an end at the hands of the Rainbow Warriors. In a way, a fitting end to the year: A slow start, a rally, and still falling short.