Fabian White Jr’s recovery from ACL tear: ‘Am I ever going to be the same’ 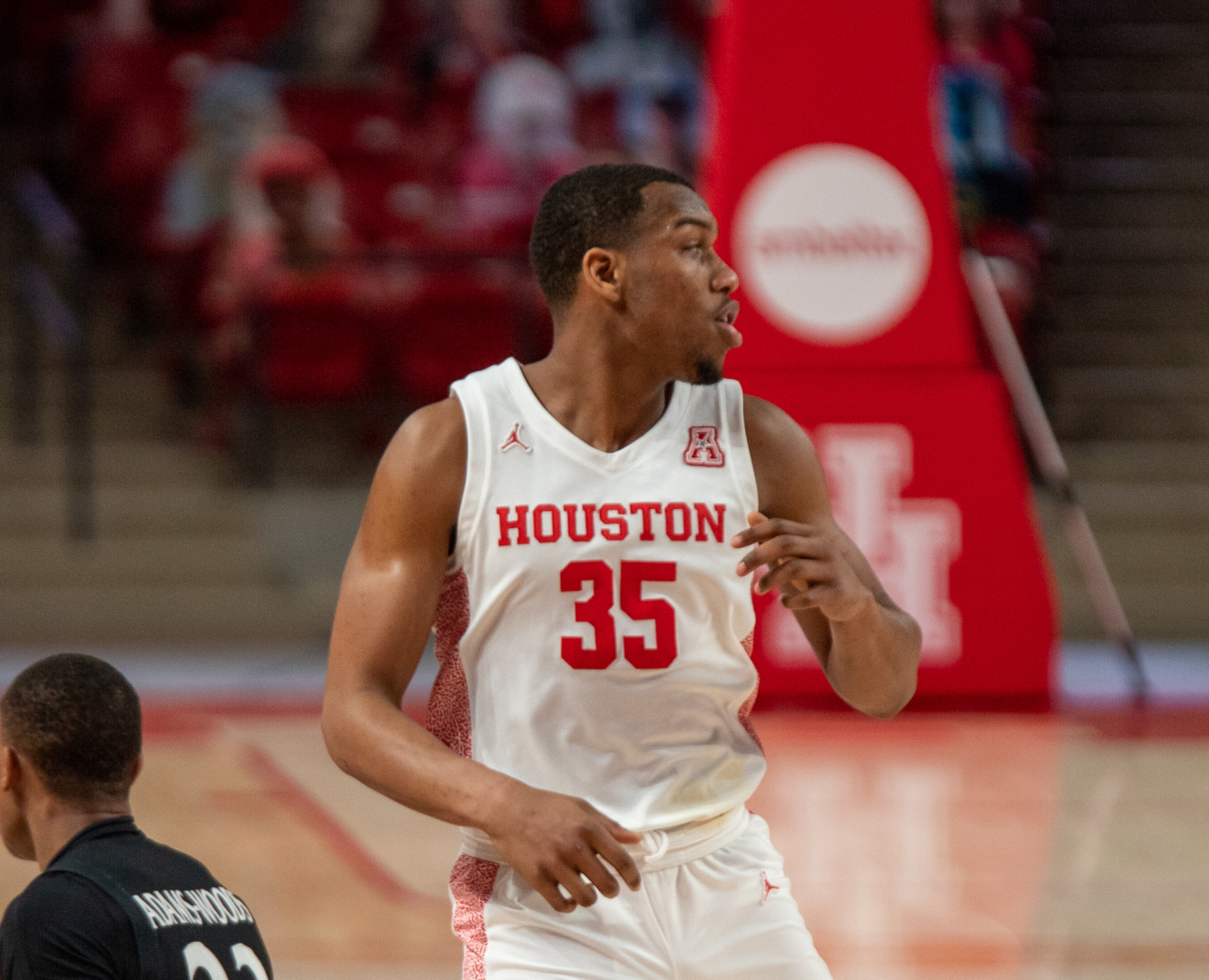 When forward Fabian White Jr. walked off the court of the Fertitta Center on March 8, 2020, his confidence was at an all-time high.

He had tallied 18 points and 14 rebounds against one of the premier players in the American Athletic Conference, forward Precious Achiuwa, and he was thrilled to see what the conference and NCAA Tournaments had in store for both him and Houston.

That excitement, however, never got to see a payoff. Just four days later, the coronavirus pandemic forced the cancellation of the AAC Tournament and the NCAA soon followed.

With the entire world seemingly coming to a screeching halt, the 6-foot-8-inch forward quietly continued to work out by himself. He found private gyms to use, and for the rest of March and all of April, he continued to attack his exercises and basketball drills.

On one spring day, however, White felt a tweak in his knee. It didn’t feel good, but he didn’t think too much of it. He took a few days off to rest and then went back to working out.

This time, though, he began to see swelling. By the time Mother’s Day had rolled around, White knew he had suffered an ACL tear.

White’s first emotions were anger and frustration. He was just a little over two months removed from arguably the best performance in his collegiate career, and now he was looking at potentially not playing again for another 18 months.

To White’s credit, those thoughts of frustration didn’t last long.

By the end of May, he had gotten his surgery done by Dr. Walter Lowe, a specialist in orthopedic surgery.

Dr. Lowe, along with a team of doctors from Memorial Hermann at the Texas Medical Center, head UH men’s basketball trainer John Houston and the team’s director of sports performance Alan Bishop, led the charge with White’s rehab. The most important piece, of course, was White himself.

“Fabian had a phenomenal mindset from the beginning,” Bishop said. “The thing about Fabian is that he is a mature individual … He was ready to train coming out of surgery.”

White had goals as soon as he got out from under the knife. He wanted to be ahead of every checkpoint the doctors and UH staff had for him.

If he couldn’t train his lower body, he would focus on his upper body.

“The guys that do the best with (injuries) get the anger out of them ASAP, and get the hunger and the dog, the eye of the tiger in them ASAP,” lead assistant coach Kellen Sampson said. “He got that hunger about the rehab process in him (quickly).”

White worked out with Bishop, Houston and the rest of the UH training staff every day.

In the first weeks post-surgery, White began working on the strength of his knee. Houston’s main focus was to make sure White could limit the pain and swelling, so he could control his knee’s range of motion.

A ray of hope

Throughout the entire process, White focused on being ahead of where he was expected to be, but playing in the 2020-21 season wasn’t completely in the picture until October.

During that month, the NCAA agreed to extend eligibility for winter sport student-athletes. In other words, White, a senior, could now play this season and still have full eligibility to play again in 2021-22. That is when Kellen began to see White’s optimism grow.

By then, the Cougars had begun training for the start of the season, which tipped off on Thanksgiving week.

While White was still entrenched in the midst of his rehab, he didn’t allow that to hinder him from being heavily involved with the team’s practices. Particularly with the forwards, or as UH calls them — the fours.

“He never missed a four workout at the expense of his own workouts,” Kellen said.

White did not just observe either. The coaching staff had him actively involved in drills. He was the passer sometimes or got to hold the pad to hit the bigs during their on-court workouts.

“It tangibly helped Justin have a great year,” Kellen said.

“It tangibly helped J’Wan come a long way in a short period of time to where he was able to be a contributor for the team. Fabe was so instrumental in helping those guys along the way. Helping them emotionally. I call him Uncle Fabe. Just being a big brother and uncle to those guys,” Kellen added.

By the time Dec. 1, 2020 rolled around, White’s team of doctors tested him on his functional skills to see where he stood, and what he could and could not do.

Around New Year’s Eve, Kellen and White had a private conversation.

“Hey look, what do you want to do here?” Kellen asked White.

One thing he wanted to make sure was that there was no added pressure from UH’s side for White to play. The decision had to ultimately fall on the Atascocita native.

Once he decided that he was going to make an effort to play this season, the staff began to map out a plan to return.

“This was a six-week ramp up for Fabe,” Kellen said. “At any point in time, he could have pulled the plug on it. This was always going to be on Fabe.”

By the latter end of January, White had gone through the last of the doctors’ checkpoints and functional tests to get clearance to practice.

He began to play in simulation games as UH calls them, which involved players Jamal Shead, Ryan Elvin, Caleb Broodo and Kiyron Powell.

“Fabe was mentally locked into those days,” Kellen said. “They weren’t (lazy) days to him. He was really locked in and focused. Competitive. (What) was a mental day for the team, was a game day for Fabian and he took it as a game day.”

As the calendar turned to February, White was finally able to rejoin the team as a full-time player. His first practice came after the team’s loss to East Carolina. The first days were rough for White, as was to be expected, but he slowly and surely continued to make improvements.

During one practice as UH prepared for its upcoming game at South Florida, White was simulating forward Alexis Yetna. That is when the coaching staff had a sense that White was close to making his return.

“He was a beast,” Kellen said.

On Feb. 18, he finally made his season debut in a road game against Wichita State. White had finally gotten back to the hardwood. It had been 347 days since he last played against Memphis. White has played in all three of the Cougars’ games after the matchup against the Shockers. In those three games, he has scored 10 points twice and fell just a rebound-short of a double-double in one.

While the UH training staff is still in constant communication to make sure that White’s knee doesn’t experience any discomfort or swelling, he continues to improve and find a groove.

The best thing for White is that UH doesn’t need him to do anything from a statistical standpoint to be successful. Everything from this point forward is gravy on the Cougars’ steak.

That doesn’t mean, however, that “Uncle Fabe” will be content with just being a spark.

“I’m 100 percent confident in my knee now,” White said. “I’m just trying to get better and better, and trying to get my wind back. Just help my team win.”

His fellow frontcourt teammate senior forward Justin Gorham believes both he and White can be a nightmare for opposing teams with their physicality and their ability to space the floor.

Regardless of what White’s role ends up being, one goal is certain, and that is making a run at the national championship. The Cougars believe with his addition, they are at a prime spot to do so.