For UH, AAC title the payoff of tough season 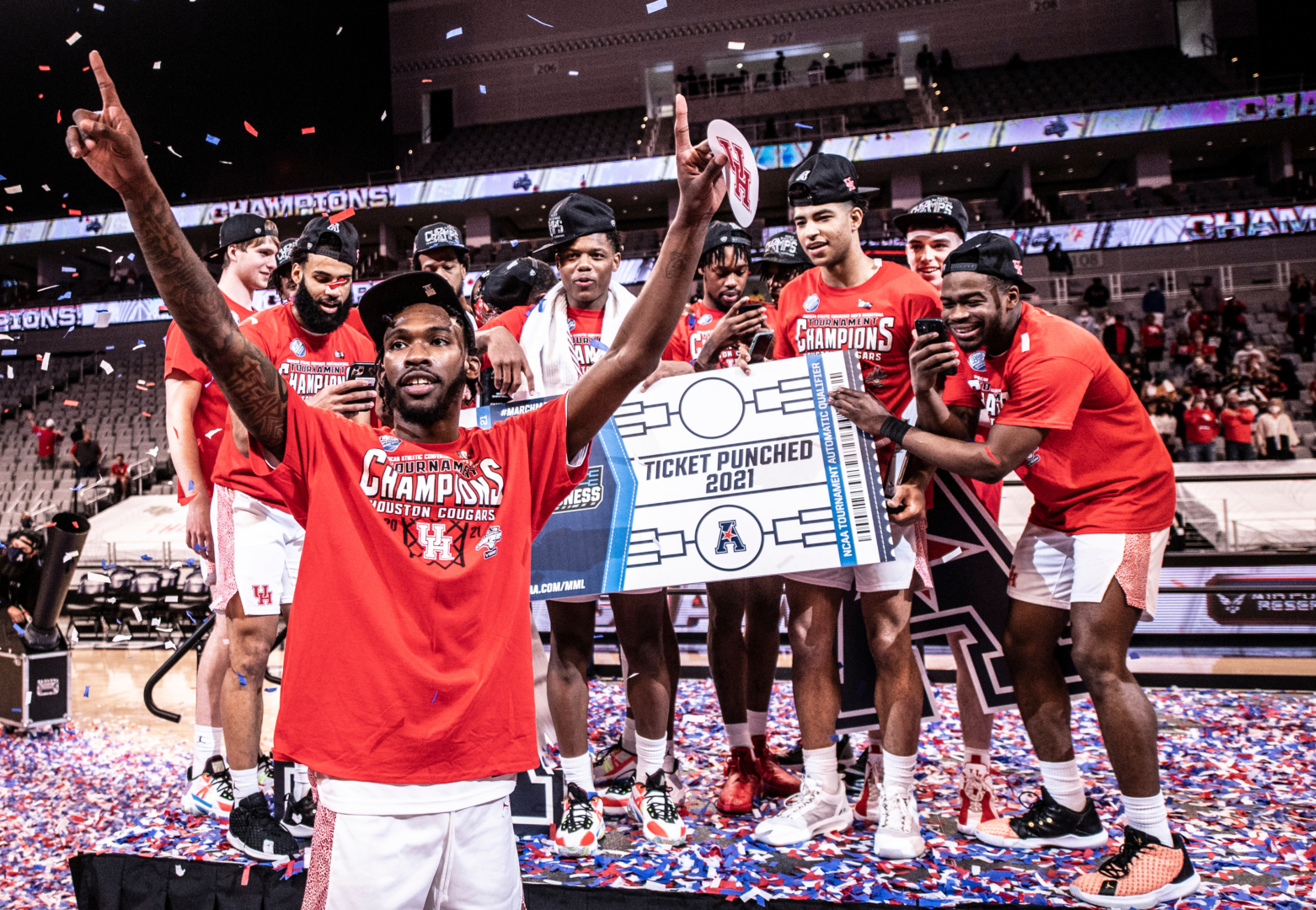 UH guard DeJon Jarreau raises his arms in celebration as the Cougars applaud their performance in winning the AAC Tournament. | Courtesy of UH athletics

The Houston men’s basketball team players were all huddled up together inside of their locker room at Dickies Arena following the complete domination of Cincinnati in the American Athletic Conference Tournament championship game.

All of his players and coaches were glued to a TV screen. They were watching the NCAA’s Selection Show, anxiously awaiting to see where they were going to be seeded in the NCAA Tournament.

“The No. 2 seed, in the Midwest Region: the Houston Cougars,” CBS anchor Greg Gumbel’s voice echoed throughout the locker room.

Immediately, all of the UH players led out a joyous scream. After a full year of nothing but roadblocks caused by the coronavirus pandemic, the Cougars’ players were able to once again experience the thrill of getting their name called for the March Madness Tournament.

“This team right now, with the opportunity they have. I’m excited for them,” Sampson said. “… We earned it. Nobody gave it to us.”

The UH program certainly left a strong final image before it competes in the first round of the tournament on either Friday or Saturday against Cleveland State.

Cincinnati, who entered the AAC title game winners of nine out of its last 12 games, including a win over No. 1 Wichita State in the tournament, was never in the contest against UH.

In the first three minutes of the matchup, the Cougars held the Bearcats scoreless, and by halftime UH held a double-digit lead. Once the second half began, the UH team put Cincinnati away with a 12-0 run to extend its lead to 24 points and were able to coast to the final buzzer.

“It never gets old,” said Sampson of cutting the nets after winning the tournament.

For his UH team, Sunday’s celebration was a culmination of all the hard work it had to put in from the beginning of the season, which included everything from running sprints early to constantly getting tested for COVID-19 to the point where it became routine for the Cougars.

“This wasn’t won this week,” UH senior forward Justin Gorham said. “This was won in October. Those hard conditioning months. Those hard early practices and everything. We knew what was at stake.”

With the AAC title now in the rearview mirror, the Cougars turn their attention to the Cleveland State Vikings of the Horizon League Conference.

While winning the AAC Tournament championship for the first time in program history is a checkpoint the Cougars wanted to accomplish, the team has its eyes set on a national championship and fully believes they have the talent to do it.

“We got a really special team,” said junior guard Quentin Grimes, who was named the AAC Tournament’s Most Outstanding Player. “I’ve never been part of a team with so much chemistry. You love playing for each other. You love when everybody does great … I feel like if we take it one game at a time and not overlook a certain opponent, we’ll be in good hands.”

For senior guard DeJon Jarreau, each game from this point has to be approached with the right mindset.

“It’s a business trip,” Jarreau said. “We’re going out to take care of business. Try to make this run. Try to bring a championship back to Houston.”

For more of The Cougar’s coverage of UH’s run in the NCAA Tournament, click here