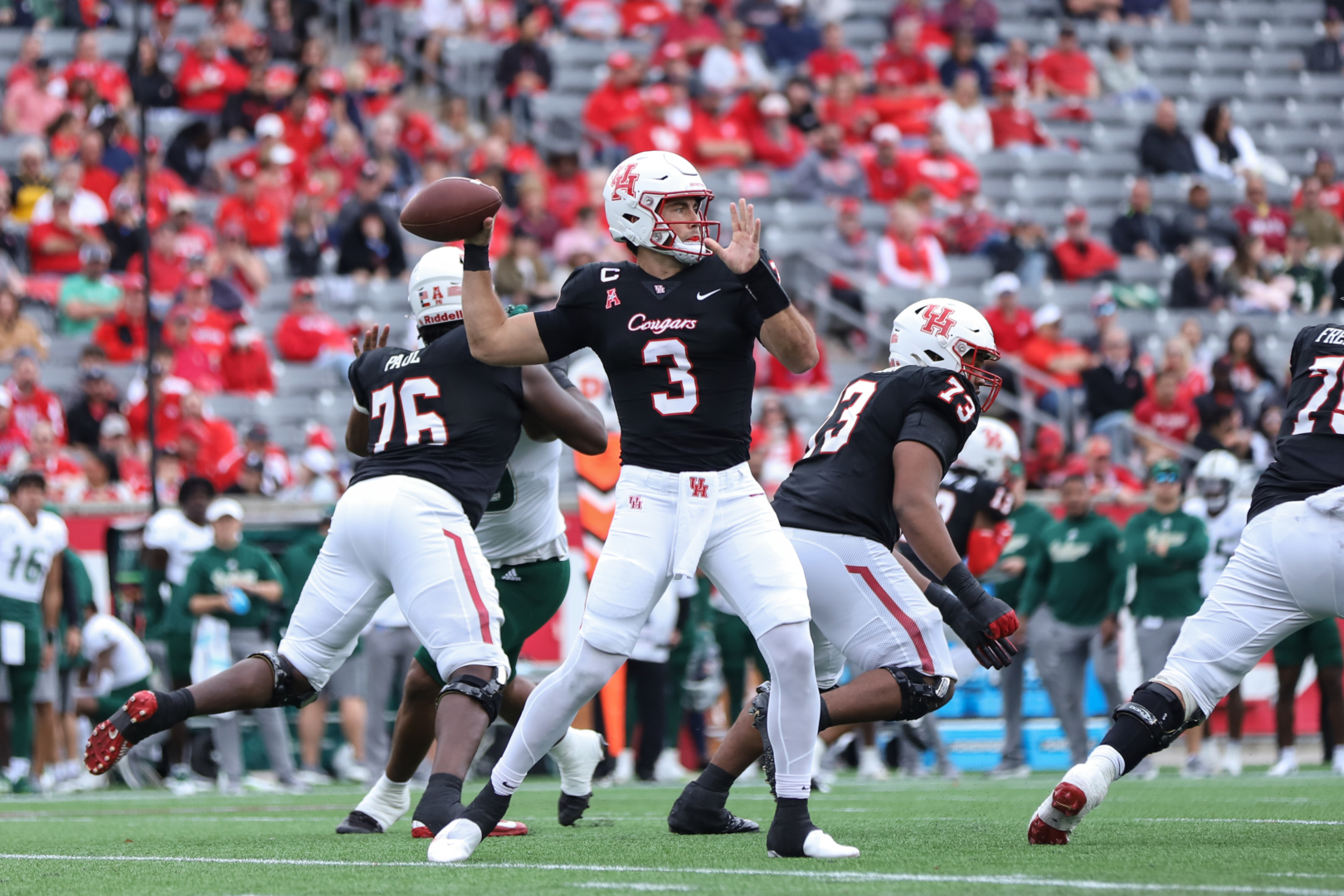 The Houston football team saw its three-game winning streak snapped after a 77-63 road loss to SMU on Saturday.

A high-scoring affair between both programs became a shootout as senior quarterback Clayton Tune finished the game with 36 completions for 527 yards, seven touchdowns and three interceptions as well as 111 rushing yards and one rushing touchdown. SMU quarterback Tanner Mordecai recorded 28 completions for 379 yards and nine touchdown passes.

SMU opened the game and waltzed down the field to open the scoring with a 2-yard touchdown pass from senior quarterback Tanner Mordecai to senior tight end Ben Redding to lead 7-0.

Tune used his legs to power UH’s first possession of the game, as he finished the drive with a 55-yard rushing touchdown to tie the game at 7-7.

UH equalized immediately as Tune hit freshman wide receiver Samuel Brown for a 12-yard touchdown to square the game at 14-14.

SMU powered down the field and wrapped up the first quarter with a 9-yard touchdown pass from Mordecai to Rice once again to lead 21-14.

In the second quarter, Tune found junior wide receiver Nathaniel Dell for a 22-yard touchdown on the first play of the period to even the scoreboard at 21-21.

The Mustangs continued to roll with a fourth score in as many drives as Mordecai found sophomore wide receiver Dylan Gaffney on a 35-yard touchdown pass to regain the lead at 28-21.

Following the first turnover of the game, SMU capitalized on a short field as Mordecai found the end zone with his legs to extend the Mustangs’ lead to 35-21.

A second interception by the Mustangs’ defense set up SMU in excellent field position once again, this time capped by a 1-yard touchdown pass to freshman tight end RJ Maryland to double the lead at 42-21.

UH responded quickly with a 37-yard touchdown pass from Tune to senior wide receiver KeSean Carter to cut the deficit to 42-28.

SMU kept its foot on the pedal with touchdowns on back-to-back possessions with Mordecai connecting with Maryland again for a 1-yard score and Redding for a second time on a 10-yard pass to lead 49-35 late in the second quarter.

UH returned for more and cashed in on a 42-yard deep ball from Tune to freshman wide receiver Matthew Golden to trail 49-35.

With 36 seconds left in the second quarter, Mordecai tacked on one more score before the half with a 4-yard touchdown to Redding for his third of the game to lead 56-35.

Tune pushed the opening drive of the second half and finished the possession with a 2-yard touchdown to Dell to cut the deficit to 56-42.

SMU responded with Mordecai’s ninth touchdown pass of the game, hitting Maryland for his third to extend the gap to 63-42.

After exchanging punts for the first time in the game, UH drove deep into the SMU red zone and got senior tight end Christian Trahan involved with a 1-yard touchdown pass from Tune to trail 63-49.

In the fourth quarter, Mordecai picked up his 10th passing touchdown on the night on a deep shot to sophomore wide receiver Moochie Dixon for 43 yards and stretched the lead to 70-49.

Tune found Brown for a second time on the night, this time for a 6-yard touchdown pass to close the deficit to 70-56.

Senior running back Tyler Lavine scoured for a 15-yard score matched by freshman running back Stacy Sneed’s 52-yard rushing touchdown to finish the scoring at 77-63.

The Cougars now head back home where they will play host to Temple on Saturday, Nov. 12 at 2 p.m. at TDECU Stadium.