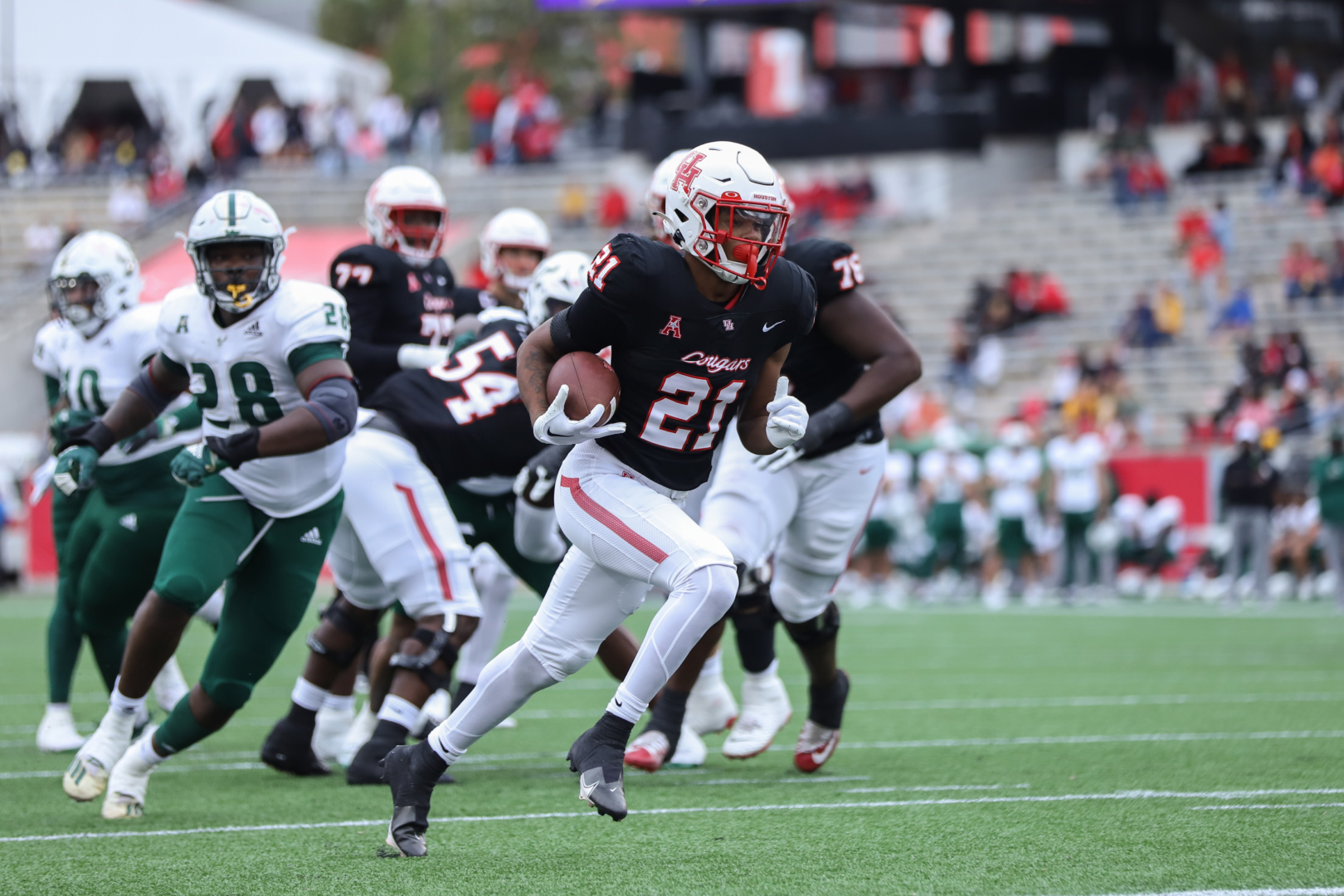 After patiently waiting for his turn, UH running back Stacy Sneed has become a breakout for the Cougars over the latter half of the 2022 season. | Sean Thomas/The Cougar

Two years into his time at UH, Stacy Sneed hadn’t seen the field.

Coming into college at the height of the COVID-19 pandemic was difficult enough for Sneed, but add on being academically ineligible throughout the 2021 season and nothing had gone right for the 5-foot-11-inch running back since stepping foot on the UH campus in 2020.

“I started off kind of rough,” he said.

In a day and age in which the transfer portal has completely changed the landscape of college football, many athletes in Sneed’s position would’ve packed up their bags and found a new home.

“I was really just being patient and waiting my turn,” Sneed said.

Just as Sneed did not give up on the Cougars, Dana Holgorsen kept his belief in the young running back even though it would have been easy for the UH head coach to give up on an undersized back who had yet to prove anything.

Even with all the talent that stood in front of Sneed on the depth chart at running back, Holgorsen had a gut feeling that the Cougars’ offense would benefit from having the Arlington native as an option in the backfield.

“There’s a reason why I didn’t get rid of him,” Holgorsen said. “There were a lot of things that happened with Stacy his first couple of years. I hung with him because I saw his ability to flash. In practice, you saw this stuff.”

There are some things you just can’t teach. Speed is one of them.

Sneed was given the nickname “Sneed for Speed,” a play on the popular racing video game “Need for Speed,” during his playing days at Mansfield Timberview High School because he possessed the kind of quickness and shiftiness that give defenses nightmares.

This was a big reason why Sneed was still a part of Holgorsen’s plan for the UH offense entering the 2022 season.

Despite not seeing the field during his first two years at UH, Sneed’s speed and elusiveness were on display during practices and his coaches and teammates knew it was just a matter of time before the running back got the opportunity to show what he could under the bright lights.

While the burst a coach looks for in a running back has always been there, the biggest question mark surrounding Sneed was if his body type would be able to withstand the wear and tear college football takes on the body.

Entering UH weighing just 165 pounds, Sneed knew he needed to add some muscle not only to be able to survive the big hits but also to effectively pass block out of the backfield when called upon.

“I had to get a little stronger,” Sneed said. “I need to protect the quarterback. That was the main job I needed to get done.”

Now listed at 185 pounds, Sneed plays with the toughness of a 230-pound back, doing everything that is asked of him. He refuses to go down on first contact. He also sacrifices his body to protect Tune when needed.

After playing sparingly over the first half of the season, Sneed has become the bell cow in the Cougars’ backfield over the past month.

In UH’s Week 8 win over Navy, Sneed recorded his first 100-yard rushing performance. The following week, Sneed found the end zone twice against USF for his first two touchdowns in a Cougars uniform.

“He’s definitely got that ability to make something out of nothing, make people miss and get crafty for big gains,” Tune said following UH’s win over USF.

While UH did not run the ball much the ensuing week against SMU, Sneed made the most of his opportunities, turning four carries into 72 yards including a 52-yard scoring burst.

Most recently, Sneed tore apart the Temple defense with big run after big run on his way to a career-high 143 yards on the ground to go along with two touchdowns.

After beginning the season third on the depth chart, Sneed leads UH in rushing with 489 yards, averaging seven yards per carry.

Though his career began as a rocky one during his first two seasons as a Cougar, Sneed’s play in 2022 has validated both his decision to stick things out at UH and Holgorsen’s choice to keep the redshirt running back around.

“I’m glad I didn’t get rid of him,” Holgorsen said.