Most authorities on the prevention of sexually transmitted diseases and unwanted pregnancies agree that the key to sustainable prevention is education. But judging by the United States’ international standings in these areas, something’s been lost in translation.

“State Policies in Brief: Sex and HIV Education” takes a look at high schools’ current sex ed policies. It was published by the Guttmacher Institute, a think tank that focuses on sexual and reproductive health. Twenty-two states in the U.S. and the District of Columbia mandate sex education for public school students; Texas is one of 28 states where such education isn’t required.

“Admit it: people have same-sex sex. We’re not going to have that go away just by not mentioning it. The problem is, (Texas high schools) aren’t representing sex accurately anyways.” -LGBT Resource Center Lorraine Schroeder

“The LGBT community has higher rates of anxiety and depression, not because they’re LGBT, but because of society’s reaction to that,” Schroeder said. “Young people will be depressed and go and hook up with somebody and not care.”

Silence does more harm than good
Non-heterosexual sex goes largely unmentioned in high school sex-ed courses, but not because there is no need for it. The latest census data, taken in 2010, showed a three percent increase in the LGBT community population, but only a one percent growth in the national population.

“Admit it: people have same-sex sex. We’re not going to have that go away just by not mentioning it,” Schroder said. “The problem is, (Texas high schools) aren’t representing sex accurately anyways.”

Associate Director of the UH Health Center Lindsay Barber said that ignorance of basic sexual health is seen all the time at the Health Center.

“All the (clinics’) doctors’ stories boiled down to students being aware of the resources, (like sex-change surgery, hormones), but had no idea the process that was involved in these options,” Barber said. “(Students) hear about options… but are not educated about what these decisions mean.” 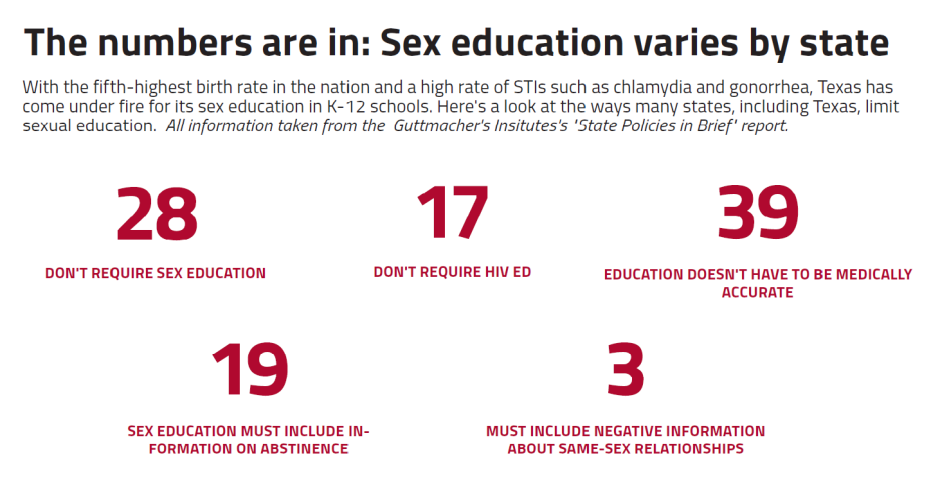 A talk worth having
As of 2013, nearly 88 percent of UH students were admitted to the University as residents of Texas**. By comparison, 79 percent of University of Texas at Austin and 86 percent of Texas A&M University students originated in Texas, in the Fall 2013 and Spring 2014 semesters, respectively. Given the higher proportion of Texas students that UH admits, UH Wellness Center Director Patrick Lukingbeal is aware of the misconceptions that the University has a responsibility to address.

“Not only do (we need to) be talking about safe sex, but we need to make a point to make sure that we’re being inclusive with same-sex partnerships,” Lukingbeal said. “That’s something that people, especially if they’re not a part of the LGBTQ community, or if they’re not involved in a same-sex relationship, won’t really think about.”

Lukingbeal, who’s researching the LGBT community and its mental health for his doctoral program, stressed that it’s not inherently bad that heterosexuals don’t think about same-sex sex, and vise versa. However, unintended negligence combined with social taboo is leaving many LGBT students in the dark.

Work to be done
“There’s not going to be much known about safe-sex practices in those communities if we’re not talking about it,” Lukingbeal said.

That’s one of Lukingbeal’s major goals — to increase open communication about sex. UH Wellness has already taken strides in fostering a public dialogue about sexual health. “The Naked Truth” is a workshop series held on select dates of the center’s Wellness Wednesdays from 11 a.m. to 12 p.m. in Rm. 1038 of the Campus Recreation and Wellness Center, where students can address any questions or misconceptions they have about sexual health. The next meeting in the series will be held on Oct. 15.

UH Wellness will also coordinate with the American College Health Association to administer the National College Health Assessment, a national benchmarking survey that’s been taken by over 800,000 college students. UH has never before administered the survey, which will allow students to anonymously share their sexual habits and their perceptions of healthy sexual practices. Students can expect the survey in their inboxes sometime in January or February.

It’s an initiative Lukingbeal has been looking forward to — he isn’t disillusioned about the amount of work that needs to be done by universities to combat sexual ignorance.

“There’s more that we can do about basic sex-education, contraceptives, STI testing, those sorts of things,” Lukingbeal said.

Openness about sex ‘a good thing’
Young people are having sex, and the LGBT community makes up a growing proportion of today’s sexually active youth. Schroeder said that failure to address the entire population isn’t going to make their sexual needs “go away,” but will leave the issues unaddressed and will be increasingly harmful to the entire community.

“We tell kids that sex is bad and sex is wrong, and it’s not,” Schroeder said. “We just need to be honest (and talk about the fact that) people have sexual drives, and that’s a natural thing. It’s a good thing.”

**It’s not clear whether all of those students attended high school and received sex ed classes in Texas.