In the spirit of opinion, I decided to roast all the candidates (possibly because we ran out of ideas this last week of the SGA election; our ideas of “Audit the SGA Fed” and “Nader get off Twitter” didn’t go anywhere).

Don’t read too much into these roasts. Each candidate has flaws, and this whole process can be described as 20-somethings playing “House of Cards,” so I wanted to make fun of them.

I’ve also compared each candidate to a fast food restaurant. Interpret what they mean as you will. Needless to say, none of these candidates deserve to be Chick-fil-A or Whataburger. At first, I had trouble deciding which politician Lawrence’s debate style most closely resembled. Then, after an answer that was almost too scripted and rehearsed, I realized Lawrence is Hillary Clinton.

Think about it: an established candidate who has been in the (student) government for a long time, has a plethora of accomplishments and yet sounds as excited as Mark Zuckerberg on Capitol Hill when speaking.

In The Cougar’s Instagram story, Lawrence mentioned her favorite vegetable is carrots because they’re good for eyesight. Now, even though carrots are easy to spot and great for terrible Bugs Bunny impressions, it’s just a commonly known fact that this isn’t true. This sounds like something my grandmother first said to me when I got glasses.

Get your facts right, Lawrence.

She also mentioned that she had a Vine account at some point and made videos. I tried my hardest to find these for your enjoyment, but she conveniently “didn’t remember her username.” So, just remember your potential SGA president has something in common with Logan Paul. 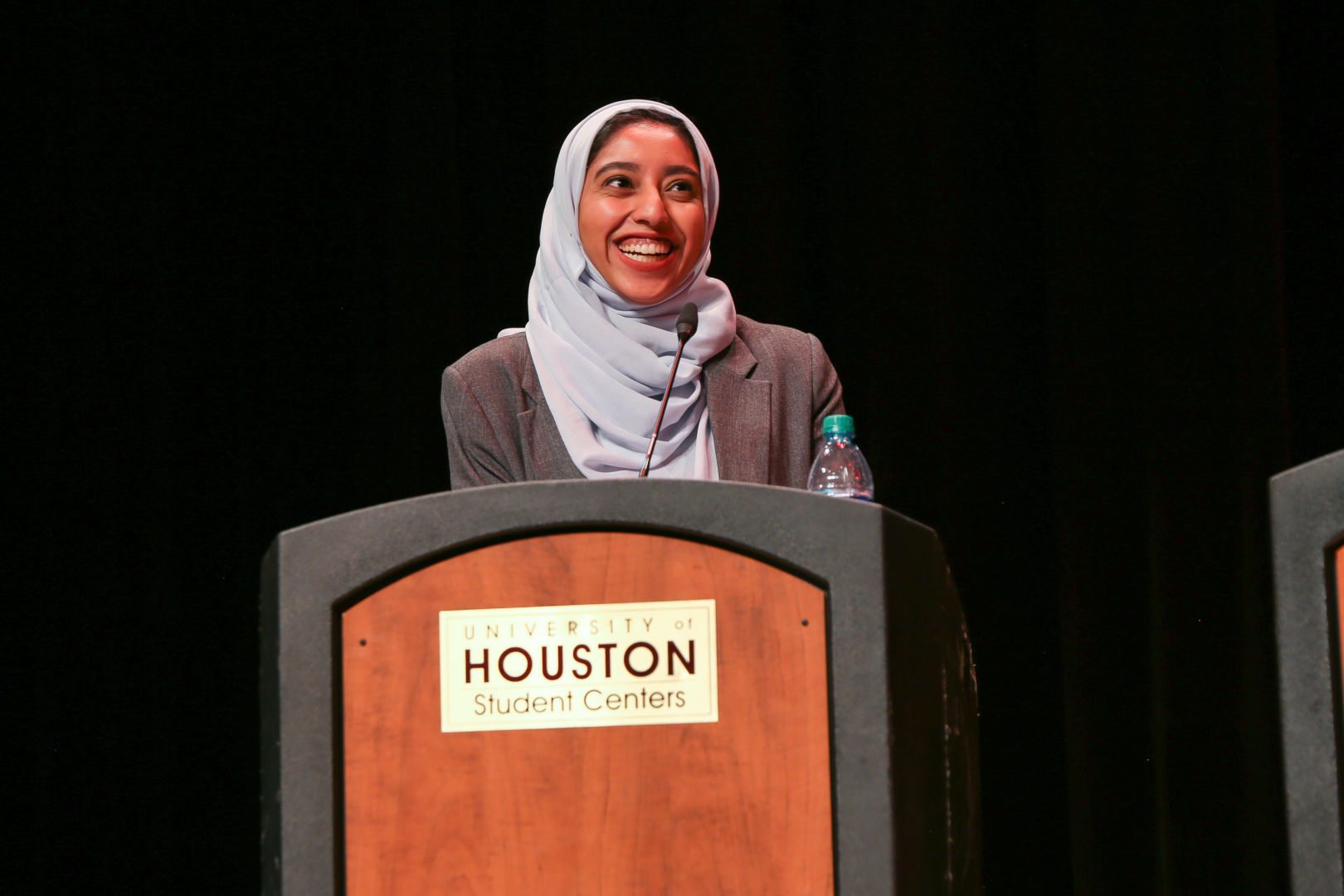 This was actually pretty hard. There’s not a lot to roast. Kazia was pretty solid in the vice presidential debate — there was nothing special. Looking at her Twitter revealed nothing of interest. She may have been a One Direction fan, but they had some bops. Don’t diss “Story of My Life.”

Kazia is basically the Meg White’s drumming of the election. It’s nothing special, but it gets the job done — see “Seven Nation Army” or “Fell in Love With a Girl.” Some people criticize it. Some people don’t. She exists. During his opening statement, Syed stepped away from the microphone. This is not a TED Talk, and you’re not Jordan Belfort. Also, no one on the CoogTV livestream could hear him as a result of the distance from the mic, but I won’t count that against him.

And don’t forget: check out Syed’s friend’s disability week initiatives. Or the CLASS Career Fair, which he helped make happen. Or didn’t. Because that’s the most important aspect of his platform: other people’s accomplishments.

CLASS is the Florida of colleges at UH. Syed is Marco Rubio. Make of that what you will.

Syed and Nader Irsan released a video detailing some specifics on their platform. Instead of listening, just imagine they’re trying to sell you on an MLM and explaining how to reach Diamond Platinum Super Gold level by annoying all your friends and family because that’s the aesthetic they seemed to be going for.

Nader Irsan — Jack in the Box 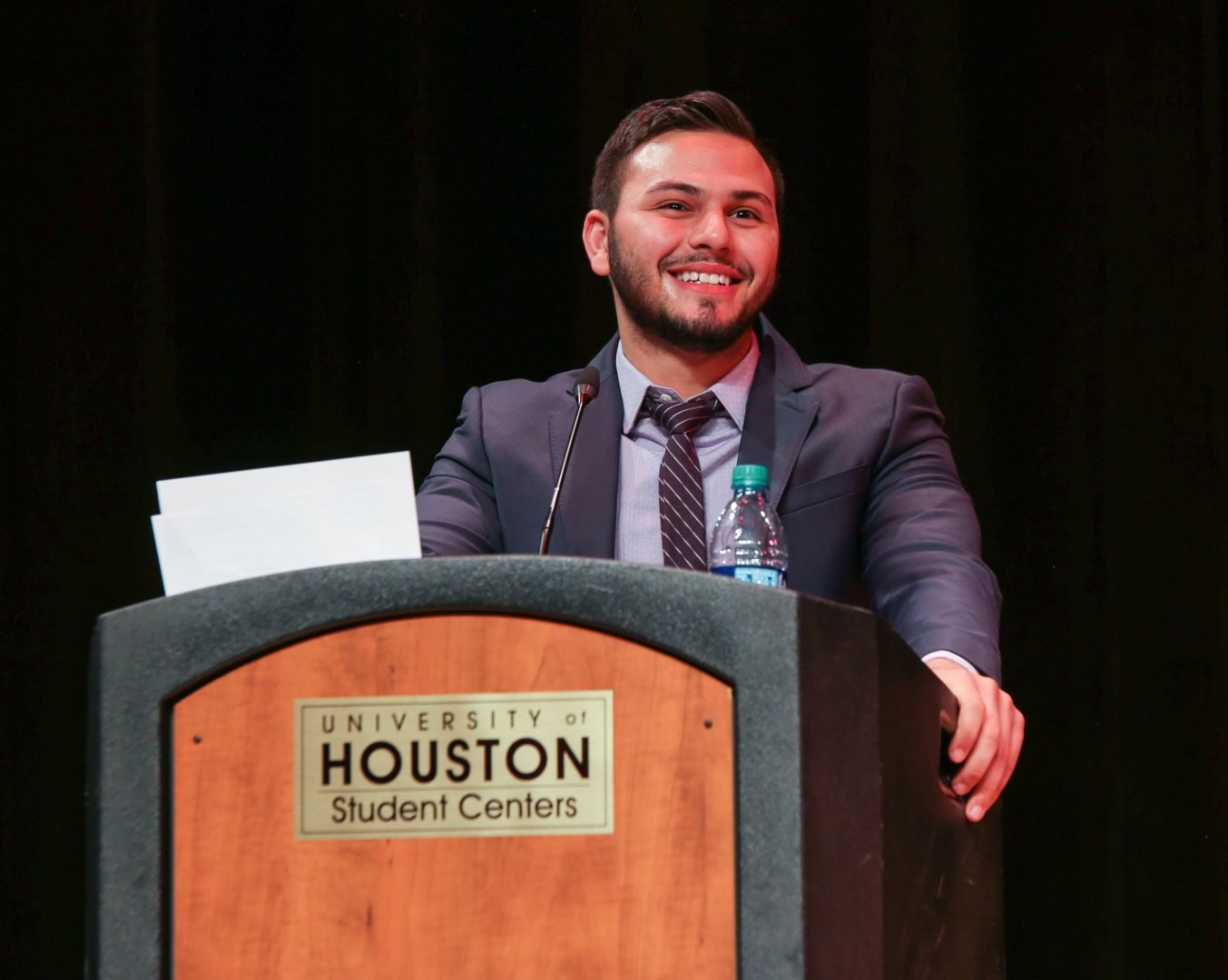 We’re going to stay away from the tweets, as that is low-hanging fruit. We at The Cougar strive for better.

So first, let me direct you to Coogs Unite’s Facebook profile picture. If you look closely, Irsan is not wearing a belt in this. I’ve also checked, and he is not wearing suspenders. This is unacceptable. Karl Lagerfeld would be livid at this fashion faux pas. Also, a tan suit? Really?

Irsan also described himself as a phoenix at the VP debate, rising from the ashes and accomplishing great things. In the spirit of low-hanging fruit, this one writes itself. Did you know Johnson worked at the UN? You should, because he reminds us EVERY chance he gets. We get it. You don’t see me parading the fact I got fifth place in a writing competition in third grade.

Johnson clearly did not pay attention to the VP debate, nor The Cougar, because if he had, he would have known what the Student Fees Advisory Committee is. Appointing students to SFAC, as I’ve discussed before, is one of the premier duties of SGA.

Working at the UN is cool and all, but that doesn’t matter if you can’t name one of your prospective duties. That’d be like the Secretary of Energy not knowing his department oversees EVERY nuclear weapon.

During the debate, Johnson sounded like a mid-rate consulting firm. All his answers were filled with buzzwords, like he was advertising to us but wanted to stay as in-the-middle as possible. If he had said “synergy,” I would’ve won my Buzzword Bingo game. Johnson now owes me a drink.

I can’t really roast him on his platform because it’s not posted anywhere. There is one important thing I need to address.

Ulow — and I am speaking to you directly — you have been here for almost seven months, assuming you first landed in our fine bayou in August. Yet, somehow you are unaware of who both J.J. Watt and James Harden are, the patron saints of Houston, along with Jose Altuve. You also referred to the Houston Texans as the “Texan.” This is an unacceptable action. Possibly disqualification-worthy.

Another thing: knowing a lot of languages is not a useless skill. That’s one of those “I’m too honest” answers you give at interviews when you don’t want to look too bad and refuse to answer the question.

Finally, being a freshman is not something that should be heralded as a reason for the office. Ulow has been here for seven months. I’m not trying to make this some type of gate-keeping situation, but that’s not enough time to get to know the campus and the issues facing students.

Voting ends Wednesday. Don’t forget to do it, or Bo Harricharran will haunt you.

Thanks to the candidates for putting up with this dumb column.