Looking for extra credit? The Rooftop Bar has a new owner. 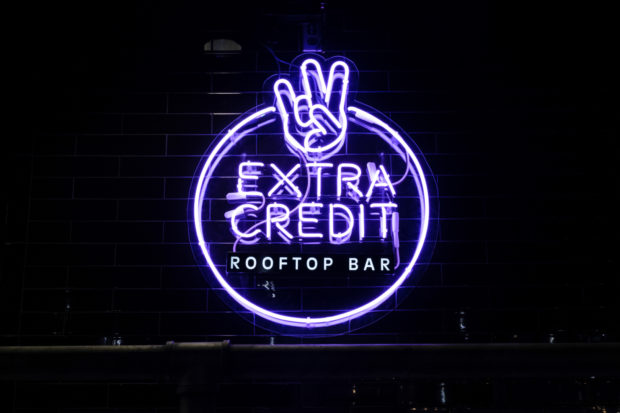 Rejoice, ye bar-goers of UH, for there is a new owner taking over the rooftop where Calhoun’s fell.

When the owners behind the Rooftop Bar and Grill announced on July 31 their decision not to renew their lease, they received hundreds of comments thanking them for their time as one of UH’s two bars near campus. They passed on the baton and Extra Credit Rooftop Bar took it up a little less than two months later with a soft opening on Sept. 1., promising to bring new food choices as the bar hits its stride.

“UH is in our blood,” said owner of Extra Credit Michael Collins, whose brother and sister attended the University.

Collins partner Jason Lowery and him own Bovine and Barley bar in downtown Houston. They were offered the spot shortly after Rooftop Bar and Grill announced their closure by their Bovine and Barley landlord, who also owns the Extra Credit building.

“He thought we would be the right fit for the space,” Collins said.

Collins said he hopes to build an environment where students are treated like young adults, not just college kids, and would love to hire more UH staff. They plan to pay workers $400 extra each semester if they take at least 12 hours and earn a 4.0.

Collins said that Luis Villegas, operating partner at Extra Credit, was his operations manager for five years and was promoted from within.

“It’s still a work in progress,” Villegas said. “But, it’s coming along great.”

Both Villegas and Collins said they tentatively planned for a grand opening event on Sept. 26.

“We’re trying to finish everything in the next couple of weeks for a grand opening,” Villegas said. “We want to have more games and a DJ booth, and we’d love to do a big balloon drop on the day.”

One of the more exciting prospects for Extra Credit is the partnership with the Oh My Gogi! food truck, which offers Mexican-Korean fusion, and potentially others as well.

“We don’t want to be another bar with the same food all the time,” Villegas said. “We want to have different options on different days.”

Collins said that the first week of Extra Credit’s soft opening was 21 and up admission only, to “let customers know the bar has changed ownership,” but 18 and up students are now welcome.

A Reddit post mentioned that there was a “crowd-mixing” situation at the other on-campus bar The Den while the rooftop was vacant, but Ben Pannel, owner of the Den, said he didn’t notice any large influx of bar goers while the rooftop space was vacant.

“We may have had a few extra customers while they were closed,” Pannell said. “But I haven’t noticed any dips since Extra Credit opened.

Villegas said he is excited for the future of Extra Credit and is ready to serve UH, and wants to find ways to give back to the campus, like fundraiser events.

“We want to partner with the school,” Villegas said. “We want to be a part of the community here.”