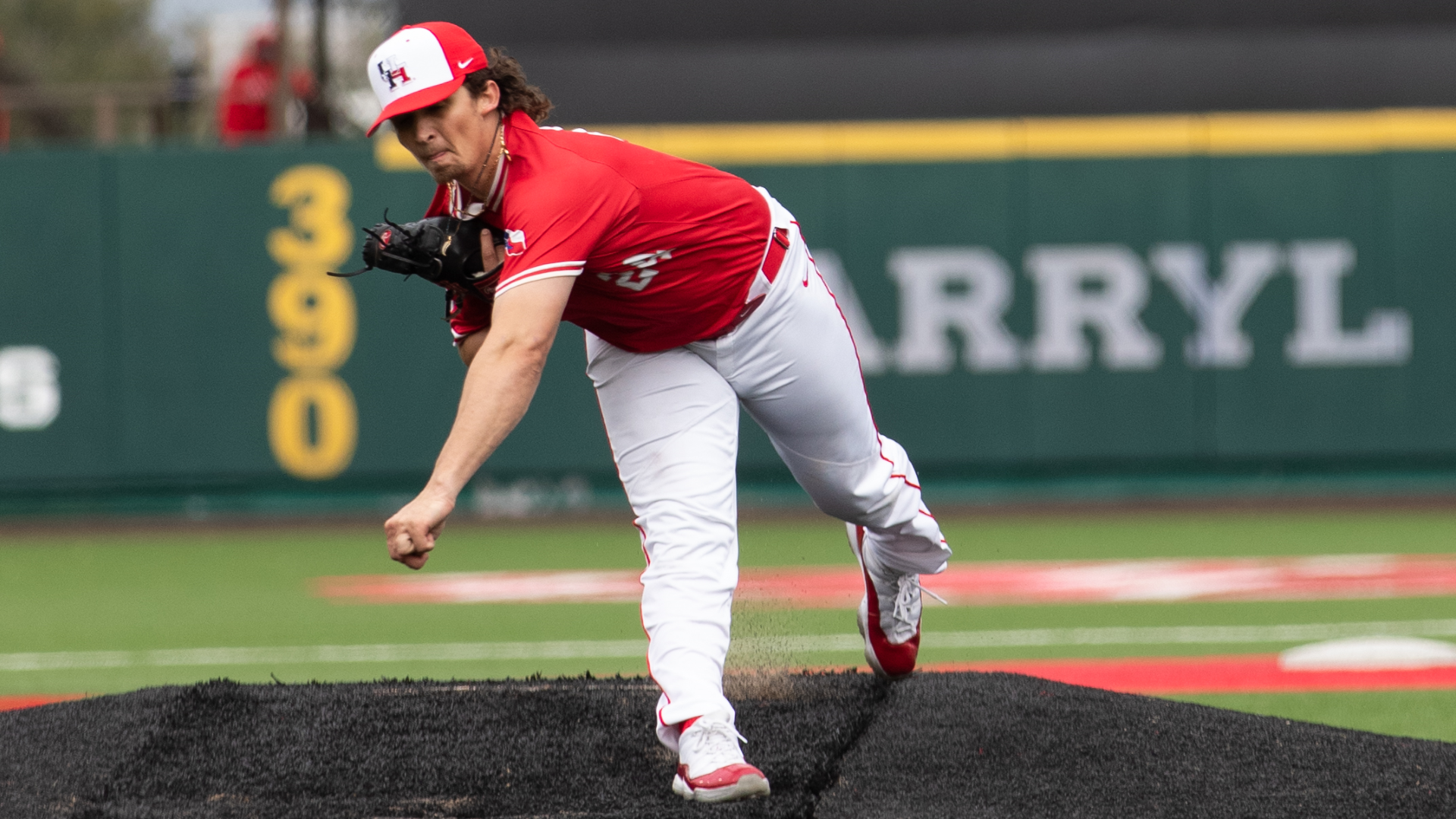 Senior pitcher Lael Lockhart Jr. has tried to find ways to beat quarantine boredom and other challenges that come with the coronavirus pandemic. He and some of his fellow Cougars teamed up to make trick shot social media videos as a way to pass the time. | File photo

Despite their best efforts, boredom set in quick for senior pitcher Lael Lockhart Jr. and his teammates.

“We’ve gone through all the Netflix shows you could watch,” Lockhart said, “and it got to the point where I was bored of Xbox and bored of just staring at the walls.”

Forced into precautionary self-quarantine after a Houston staffer had shown symptoms related to COVID-19, the disease caused by the new coronavirus, the players needed an outlet.

That’s when restlessness, creativity and a sprinkle of good old college student ingenuity came into play.

“We’re a few college kids,” Lockhart said. “We got some Solo cups upstairs I’m sure, and we’ve got some ping pong balls hanging around.”

What ensued of the quarantine boredom, a myriad of inventive trick shot challenges and Twitter jabs between Lockhart and other Houston players, was social media gold.

And above that, it showed how creative the Cougars are willing to get to cope with the unprecedented situation forced onto many by the coronavirus pandemic and all the challenges that come with it.

It was clear from the beginning that Lockhart was the ringleader.

He discovered TikTok shortly after the remainder of the 2020 season was canceled, joining millions in the U.S. who are downloading the increasingly-popular video sharing social media app as much of the nation shut down due to coronavirus fears.

“It all kind of started from being bored beyond belief,” Lockhart said.

It began with simple trick shots.

Lockhart sits at the top of the staircase, tosses a ping pong ball and it bounce, bounce, bounces until it lands in the bright-red cup at the bottom of the flight.

Day 2 of no baseball. Help. pic.twitter.com/tCSSvNC8KX

But for his roommates — juniors Kyle Lovelace and Clay Aguilar — it was too easy of a challenge.

“Make it to where it’s hard,” one of them said.

So Lockhart, out of pure boredom, obliged.

As the days in quarantine went by, the trick shots became more difficult, evolving into ricochets and behind-the-back throws.

Then, to spice it up, the 6-foot-3 lefty got his teammates involved.

Lockhart’s videos caught the eyes of some of his teammates, especially junior pitcher Jared Pettitte.

“I posted the first two or three days and Jared finally texted me, ‘Hey, man. Tag me in this next one, and make it a challenge,’” Lockhart said. “I put #quarantinechallenge and tagged Pettitte and next thing you know he makes the shot and we go back and forth.”

Dedicated to the game @LaelJLockhartJr , can you top it? Probably not. pic.twitter.com/FaDhrlyBgf

Pettitte, who attributes the challenges to being “bored out of our minds,” has appreciated the fan response to his and Lockhart’s videos.

Despite Pettitte’s lighthearted intentions, Lockhart has gone to great lengths to one-up his fellow pitcher.

One installment of the challenge that saw him flip cups from each staircase step until he reached the top took Lockhart eight hours in one day to complete.

“If you make Tik Toks I’m going to judge you it’s just that simple,” jokingly read one of his tweets.

Lockhart launched another comedic jab, quoting the tweet with one of his videos attached.

Although he disapproves of the social media craze, Papantonis has appreciated the ways his teammates have made light of the situation.

“I think it’s kind of silly,” he said. “But on the other hand, Lael and Jared both had a nice little back and forth going with the ping pong balls.

“I give props to Jared and Lael for finding fun and intuitive ways to pass the time.”

Although it may seem like it, social media hasn’t completely dominated the Cougars’ lives.

Lockhart, who has since gone home to Friendswood about 16 miles south of UH, has used the time to continue working out and keeping in shape in his home gym, as well as getting back into grilling.

“I’ve been hanging out by the pool, running and doing all this stuff I wouldn’t typically do this time of the year,” he said. “It’s kind of a weird situation.”

Even Papantonis, who’s recovering from a season-ending shoulder injury, has found ways to keep busy as the pandemic keeps millions of Americans at home.

Along with his regular trips to physical therapy to rehab his shoulder, the infielder has been working at a local liquor store in his native New Jersey.

“It’s not going to go out of business,” Papantonis said, “especially in a time like this.”

TikTok and Twitter haven’t been the only bonding platforms for Houston as players try their best to maintain camaraderie in the era of social distancing.

The Cougars have followed UH athletics trends despite being separated and have made use of frequent Zoom meetings for study halls, FaceTime calls and video game hangouts.

“It was nice to see everyone again,” Pettitte said after the Cougars’ online meeting last week, especially after the “unfortunate” ending to Houston’s season.

The future was bleak for a while for many seniors, like Lockhart, whose college careers — and last shots at proving themselves to MLB scouts — were seemingly cut short.

But, Papantonis said, the atmosphere around the team has lightened since the NCAA approved a measure authorizing extended eligibility for spring-sport athletes who lost a season due to the outbreak.

“We’ve just tried to control what we can control,” Pettitte said of the Cougars’ handling of the situation, “even with so many of the negative things going on.”

So for now, while isolated yet still somehow together, silly trick shots and video chats will do.

Even if it’s just to cope for a few hours a day.