Josh Carlton and Taze Moore, who both transferred to UH this year, have played key roles in the Cougars’ success over the course of the season. | Sean Thomas/The Cougar

Combined, Houston’s four seniors have played in 545 college basketball games, going through many highs and plenty of lows to get to the point where they are today.

Come 6 p.m. Thursday, there will certainly be emotions, maybe even some tears shed, as each senior takes a trip down memory lane and reflects on his career.

Kelvin Sampson, who has coached in college basketball since 1979, is a veteran of losing senior players at the end of each season, but all his years in the game don’t make saying goodbye any easier.

“Seniors come and go but you miss them,” Sampson said.

No. 35 has already etched his name in the record books as one of the all-time great Cougars.

Being winningest player in UH men’s basketball history,  scoring over 1,000 career points, winning three American Athletic Conference regular-season titles and one conference tournament as well as playing in three NCAA Tournaments, including the Cougars’ 2021 Final Four run are just a few of the milestones that Fabian White has achieved while wearing red and white.

Though walking down the Fertitta Center tunnel and onto the court has become routine to the 6-foot-8-inch forward from Atascotia, White knows it will hit him differently when he takes his home floor for the 53rd and final time of his career when the Cougars face Temple on Senior Night. Fabian White Jr. has been the leader of the UH basketball program this season, said Kelvin Sampson. | Victor Carroll/The Cougar

“Playing my last home game here (at Fertitta Center) is the end of a long era for me and it’s going to mean a lot,” White said. “It’s going to be emotional after the game. Hopefully, it’s off a win, not a loss. It’s going to be a very emotional night for me.”

During his five years at UH, White has grown in many other areas of his life other than just basketball. From learning how to overcome adversity to finding his voice as a leader, White has turned from a boy to a man, Sampson said.

Looking back to when he arrived at UH in 2017 compared to now, White sees how much his time as a Cougar has changed him.

Sampson can’t picture what it will be like to coach a UH team without White on it, joking that he will try to find a way to bring White back for a sixth year for the 2022-23 season.

“I may have to find a way to get (White) another year,” Sampson said. “May have to negotiate with him that he doesn’t have to go through conditioning and we just let him get to the games since he’s so old.”

Although he’s only spent one year in the UH program, Josh Carlton has played a key role in the UH men’s basketball team’s success this season without guards Marcus Sasser and Tramon Mark.

Carlton admitted he wasn’t sure how big of a role he would play for the Cougars when he decided to transfer from UConn to UH, but he was confident that he would be a part of a successful team.

“I thought we would win,” Carlton said. “I thought that for sure, but I wasn’t sure what my contributions would be as an individual.  I always knew I was going to have a good opportunity to win here but I probably exceeded what I thought I would have done as an individual.” Ever since Marcus Sasser and Tramon Mark went down with injuries, Josh Carlton has been a focal point of the UH offense. | Sean Thomas/The Cougar

As Carlton’s short, but impactful UH career comes to a close, the 6-foot-10-inch center said he has not really gotten emotional but has spent time reflecting on all that he has gone through in the past year and his college basketball career as a whole.

“(I’ve been) reflecting on when I first got here in June and all I’ve been through since then,” Carlton said. “The conditioning, the tough practices, the tough games and all that stuff.”

Perseverance is the word Carlton used to sum up his time as a college basketball player. He is proud of all the adversity he has overcome to get to the point where he is today — a key player on a conference championship team that has a chance to make noise in the NCAA Tournament.

“Going through tough times at UConn playing for a national program that probably wasn’t in the best spot, people can be kind of harsh about that,” Carlton said. “Just persevering there and trying to stick with it and then coming to (UH) and being challenged by the coaches and by my teammates and being able to get through it and end the season as a champion.”

Fast forward to today, and Edwards has found that same success with UH that he had during his three years as a Red Raider.

It’s hard for Edwards to believe that he has reached the final chapter of his time as a college athlete.

“It’s a lot of emotions because freshman year you just don’t know any better and then sophomore, it just keeps going,” Edwards said. “It’s slow but it’s fast at the same time.” Kelvin Sampson has described Kyler Edwards as “solid” all year, because of his unique ability to excel in every aspect of the game. | Sean Thomas/The Cougar

Playing at UH has been the perfect way for Edwards to end his collegiate career, given that he was heavily recruited by Sampson when he was in high school.

“I’m just thankful for coach (Sampson) believing in me for my last year and him just trusting in me,” Edwards said.

Edwards tweeted that he cried when he saw the tribute video, which featured his family, Sampson and UH starting point guard Jamal Shead, the UH men’s basketball account posted on Wednesday afternoon because it was a way of not only seeing how much he has grown throughout his career but also the impact he has made on others.

“You put so much time in this game and it’s people that you love saying good things about you and how they really feel about you is a true testament to what you did,” Edwards said.

For Taze Moore, his time in college has been much more than about basketball.

From learning discipline and maturity to having to overcome five surgeries after suffering a gruesome leg injury during his freshman year at Cal State Bakersfield, those who have been around Moore say he has truly become a man over his college career.

Adventurous is the word Moore always uses when asked to describe his college experience.

“I always call it adventurous because I’ve been up high, I’ve been down low and I’ve been in areas where I’m just lost,” Moore said. “As a basketball player, I think it’s best that kids like myself that go through a lot of problems, a lot of internal trauma so to say with injuries and stuff like that you just try to have fun and figure out the good stuff in life. I’ve been on a rollercoaster from Bakersfield to here.” 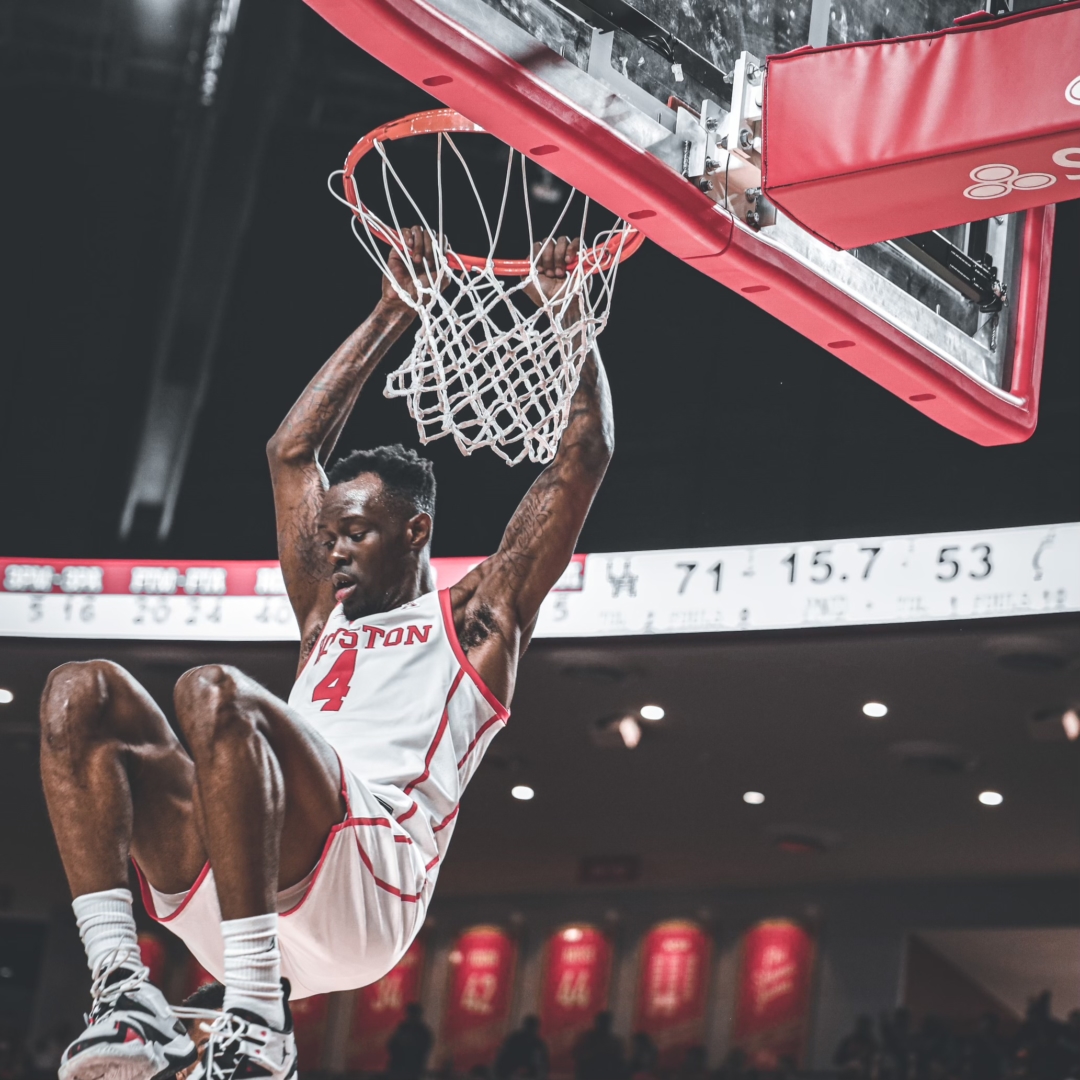 While Moore said it will be emotional when he sees his mom, cousins and the rest of his family on Senior Night, he can’t help but feel full of joy when reflecting on all he’s been through and what he has accomplished.

“I’m just happy,” Moore said. “Just happy, not sad, not upset that I’m leaving. I’m happy for the program and what we’ve done this year.”

One year at a program might not make a huge impact on the average college basketball player, but the year Moore has spent on the UH men’s basketball team has meant the world to him.

Moore has made memories and developed brothers in his teammates during his short stint as a Cougar that will continue to last long after his UH career is over.

“(It’s been) everything and more,” Moore said. “I knew I would be a winner coming here. That’s one of the main reasons why I came (to UH). And I knew I’d be around great guys, great people and a great program. That’s all I wanted in my last year was to be around greatness.”