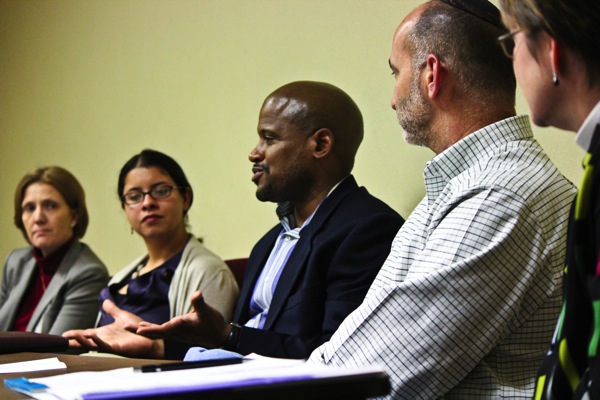 Representatives from different religions discussed the role of spirituality in the lives of LGBT people. | Hendrick Roseman/The Daily Cougar

The LGBT Resource Center and the LGBT Studies Minor Program at UH hosted the first in a series of lectures Tuesday titled “Religion and the LGBT Person,” featuring a panel of religious leaders to discuss how individuals can reconcile their religion with their LGBT identity and continue to develop spiritually.

Director of the LGBT Resource Center Lorraine Schroeder began the lecture by briefly introducing each panelist before each discussed their respective religions and how different religions have become more open to the LGBT community.

The Rev. Ginny Brown Daniel of Plymouth United Church became a pastor to a dying church in 2003. She said she came to that church saying, “I believe we are all made in God’s image,” and she was willing to publicly say that. They were open to accepting that message and the possibilities of what she was implying.

“Around the country, each church can vote to become open and affirming,” Daniel said. “I am part of the United Church of Christ denomination that is one of the only Christian denominations in the country that is open and affirming of those who are gay, lesbian, bisexual, transgender or questioning. Last year alone, we married four couples that are either lesbian or gay. There are communities out there that will welcome and bless you in that way.”

Rabbi Kenny Weiss is the executive director of Houston Hillel, the largest religious organization for Jewish college students. A few years ago they published a program manual specifically for LGBT inclusion.

“My oldest cousin, who is gay, expressed to me how when he was in college in the early 1960s, there was nothing for him. He really doesn’t do anything Jewish now because he was so turned off because there was nowhere to go,” Weiss said. “Now it is very much the opposite for the Jewish community.”

The Rev. Janice Ladd is part of the Resurrection Metropolitan Community Church, a Christian Church that follows God’s call to justice for all people. They strive for the social justice for the LGBT community.

“We strive for the holy integration of our spirituality and sexuality. Most people leave the church because the church doesn’t do well with talking openly about sexual minds or our sexual bodies. That’s why our population has been outcasted more,” Ladd said. “We deal with so many who are hurting (or) lost and we try to bring them back to their faith  —  back into their relationship with God. We are here to demonstrate God’s unconditional love to all people through Christian action.”