Issues on offense, defense exacerbated away from home 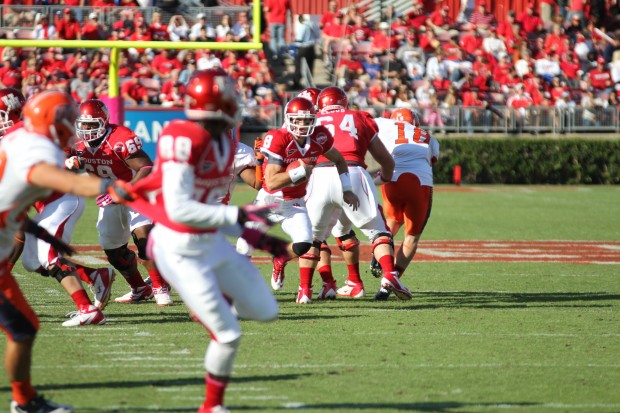 In UH’s three true road tests, falling behind in the first half has become the new normal.

Against UCLA, ECU and SMU the Cougars were outscored, by a joint 73-21 in the first half.

On Saturday, ECU built a 28-7 lead en route to a 48-28 victory on sophomore quarterback Shane Carden’s four first half touchdown passes. The Cougars’ offense did not match the production.

“We weren’t efficient on first down. We got into a lot of second and longs because we weren’t running the ball well enough on first down,” Levine said. “We had some dropped passes and couldn’t get into a rhythm. Then we got behind and had to play catch up.”

Redshirt sophomore quarterback David Piland finished with 356 yards and four touchdowns but the Cougars did not score until five seconds remained in the first half. UH’s running game was nonexistent in the second half with a single rushing attempt.

Redshirt junior running back Charles Sims was injured late in the second quarter and his loss contributed to the Cougars low second half output on the ground. But Sims only had five carries before the injury, which is well off the 24-touch pace that Levine said he wants Sims to receive each game.

In addition to their own struggles on the ground, the Cougars had problems stopping the run, which has been a road issue all season.

UH hasn’t improved defending the pass on the road either.

The Cougars needed to win to continue to control their destiny in Conference USA. Piland said each game was crucial.

“Every game gets us that much closer to accomplishing the goals we want to accomplish…We need to go play and perform at our highest level for these next couple games and definitely bring our ‘A’ game,” Piland said on Tuesday. “There are no excuses for turnovers or poor plays.”

Now their future is less certain. The Cougars now need to win two of their next three games to become bowl-eligible.