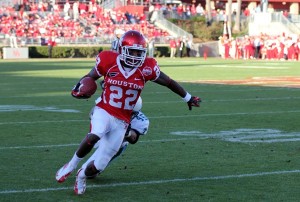 With senior running back Charles Sims leaving the program, more will be expected from sophomore running back Ryan Jackson. | File Photo/The Daily Cougar

After losing some talent and leadership on defense — D.J. Hayden and Phillip Steward from 2012 have gone to the NFL — the offense may need to carry more of the load, but it will have to do it without one of its best players.

On May 22, redshirt senior running back Charles Sims broke the news to his fans of his departure.

“It is with regret and deep humbling that I am ending my playing career at the University of Houston,” Sims said in a statement. “I don’t know what my next step will be. I have one more year of eligibility, therefore I may look to play (one) more year of college football, or I may enter the NFL Supplemental Draft later this year.”

Although he was injured for three regular season games in 2012, Sims was an exceptional player on the Cougars’ offense, as he ran for 851 yards to go along with 11 touchdowns.

The Cougars struggled without Sims in the backfield as they went 1-4 in his absence.

He wasn’t only effective running the ball, he was also a threat to catch the ball out of the backfield, too. Sims caught 37 passes for 373 yards for three more touchdowns.

Sims was dynamic in the pass protection as well. In the Air-Raid offense, the running backs also have to help keep the quarterback upright on blitzes, especially for a team that passes the ball more than 65 percent on offense.

Although Sims’ departure is a big loss for the offense and his presence would have taken pressure off the quarterback position, the Cougars are not in total disarray, as they have two other running backs that are capable of carrying the load.

“We didn’t have that type of confidence earlier in the season,” Levine said. “But now as we’re moving forward, we certainly do with Jackson and Farrow, who gained so much experience as freshmen.”

Farrow, who is a bigger player than Sims and can run effectively between the tackles, ran for 466 yards and two touchdowns. Jackson has breakaway speed and ran for 252 yards and three touchdowns.

As for Sims, no one knows what his next plans are for sure.

The 6-foot-1 running back Houston native could enter the supplemental draft or immediately transfer to another program and play without sitting out a full season. He was granted a release, but there were restrictions placed on his transfer.

However, the Cougars will be forced to move on and continue with their current running backs.