As a part of her initiative to hear student’s concerns in order to better serve them, Provost Paula Short hosted her first “Pizza with the Provost” event on Friday. 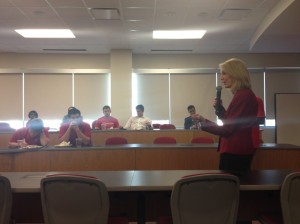 In her inaugural “Pizza with the Provost,” Provost Paula Short talked about her academic initiatives and prompted questions from the student leader audience. | Natalie Harms/The Daily Cougar

Short, who has served as provost for a little more than a year, said she wanted a forum where she could hear student academic concerns that she might otherwise be unaware of. Also, the informal meeting is an opportunity for Short to talk about initiatives the campus might not know about.

The Student Government Association has helped Short to begin the “Pizza with the Provost” event, which will take place monthly at various campus locations. SGA President Cedric Bandoh usually is tasked with being the student voice to administrators, but helped to facilitate the meeting with other student leaders.

“I meet with administrators on a monthly basis and in one of our meetings Provost Short mentioned that she wanted to hear from and connect with more students here on campus,” Bandoh said. “Both of us kind of put our heads together to figure out what is an easy way to do connect with different types of students.”

The meeting, which as its name suggests provided lunch and candy to invited student leaders, allowed Short to introduce herself and explain her job, as well as her goals and initiatives.

The provost’s tasks she currently has in place, such as university efforts like Foundations of Excellence — a task force to improve the first year experience — and fixed four-year tuition, occupied some of the discussion. But student questions steered the second half of the meeting.

One huge concern of students was access to quality career services — something UH is lacking campus-wide. Schools like the C.T. Bauer College of Business have the Rockwell Career Center, which better prepare its students for job interviews, students said, but other colleges don’t have this facility.

Short said that this was something on her radar and that it’s something that needs to be addressed.

“One of the things I’ve had my staff do was actually travel to other universities that are top tier and look at the kinds of things they put in place that make them a cut above. And we need to cherry pick the best practices that are doing the right thing and we need to bring them back here. Career services is something that we are reorganizing in my office.”

The luncheon concluded with many thanks from SGA and the provost, and both encouraged continual communication from student leaders and the Department of Academic Affairs.