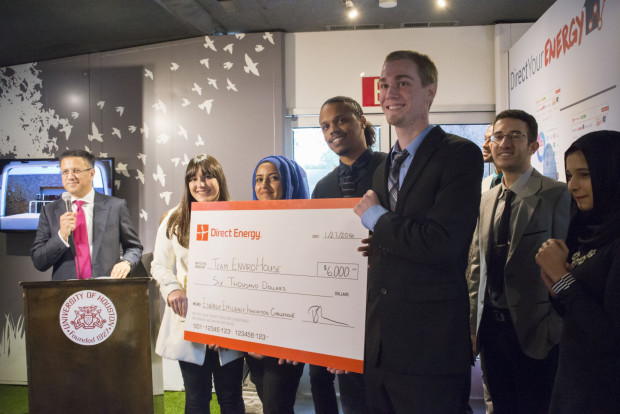 Students from team “Envirow House” spent five months designing an 800-square-foot house under a budget of $80,000 with a utility bill of less than $25 a month as part of UH Energy and Direct Energy’s Energy Efficiency Innovation Challenge. | Justin Cross/The Cougar

Approximately five months of planning went into this moment.

“When they were describing the winning team, my heart was beating so fast,”  finance and supply chain sophomore Inbisat Zahara said. “I knew they were talking about us.”

Zahara was one of the four students of “Team Envirow House” that were crowned first-place winners of $6,000 Wednesday for their design in the Energy Efficiency Innovation Challenge, sponsored by both UH Energy and Direct Energy.

The students were required to design an 800-square-foot house with two bedrooms and one bath that could be built under a budget of $80,000 with a utility bill of less than $25 a month.

“The biggest thing we were trying to do when we were given this as a challenge was (to give these students) an appreciation for what… is possible when you are thinking about energy-efficient homes,” joint chief energy officer Radha Radhakrishnan said.

Although about a 100 students were originally interested in the beginning of the fall 2015 semester, seven teams of with an average of five students each ended up committing to the challenge.

The teams were interdisciplinary, meaning they included members of different colleges, such as law, business, architecture and engineering.

“Going into this final presentation, we wanted to keep making sure we didn’t leave a single thing out of it,” mechanical engineering junior and EnviroHouse team member Travis Franks said. “There is no way to explain how excited we are for winning that.”

The Third Ward community was kept in mind when the students took on the challenge.

“For this project we really had to look at the Third Ward and what they really needed,” industrial design junior Jessica Hedge said. “They have such a beautiful, vibrant culture there so we wanted to create a house that goes with the community.”

Along with size and cost requirements, students were judged based on their logic behind choosing the materials.

“The most important thing was insulation,” architecture graduate student Giovanni Pena said. “So we used something called EcoBatt insulation, made out of recycled glass bottles and sand that uses less energy to make.”

Team Envirow House also allowed features of their homes, such as flooring, to be customized.

“Sometimes with inexpensive housing there is a stigma that all of the houses are the same and they don’t reflect the people who live there,” Pena said. “We wanted the homeowners to participate a little in the designs so they could put their own stand on it.”

During the award ceremony, Badar Khan, CEO of Direct Energy, mentioned how this challenge has allowed Direct Energy to deepen their relationship with the university.

“It’s taught us that we absolutely have the next generation of graduates here at the University of Houston who are more than equipped to handle the problems of tomorrow,” Khan said. “My company is committed to taking this project to the next phase and challenging all of us to bring this project to reality.”