He then found an advice column by Walt Whitman under a pseudonym.

“I just turned to what I knew about him: he published in a number of newspapers that are now digitized, and many more that weren’t, and he wrote a great deal under pen names. I turned to those pen names, and got to work,” Turpin said. “One of these pen names, Mose Velsor, brought up a single hit in a major digital archive, a newspaper notice in the New York Tribune advertising ‘original articles on manly training, by Mose Velsor,’ shortly to appear in the New York Atlas.”

Whitman’s “Manly Health and Training” contains 13 parts — each of which was published in 1858 on a weekly basis by the now-defunct Atlas. Under the pen name, the poet’s sprawling essay stayed in obscurity for over 150 years.

“We have nearly 50,000 of his words that we didn’t have before,” Ed Folsom, an English professor at the University of Iowa and editor of the Walt Whitman Quarterly Review, said. “That’s what makes (Turpin’s) discovery stand out — it’s a previously unknown book by Whitman, published during a period of Whitman’s life that we know very little about. Biographers and critics and scholars, as well as general readers, will be scouring this text for years to come.” 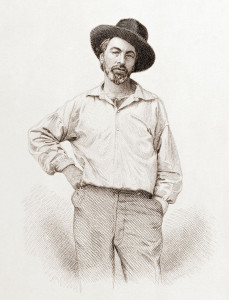 Whitman as he appears in his first edition of “Leaves of Grass.” | Courtesy of Wikimedia Commons

Whitman’s self-help guide offers advice on topics, including the importance of growing a beard, what to eat, and how to dance.

“My guess was it would probably be one or two short articles on the subject,” Turpin said. “I sent away for the appropriate microfilm and forgot about it. When it arrived several weeks later, I scrolled to the appropriate issue and there was the piece on the front page: ‘Manly Health and Training,’ a dense article, several thousand words, by Mose Velsor.”

Turpin said that “Manly Health and Training” sheds light on Whitman’s complicated racial and political ideologies, both of which undergirds and undercuts the egalitarian message in “Leaves of Grass.”

“Interestingly enough, some language in the article — along with a series advertisement in the Atlas itself — matched verbatim a hand-inked ad draft Whitman had written and discarded among his papers,” Turpin said.  “So, knowing that, I knew I was looking at something written by Whitman himself.”

Turpin said he later contacted a couple of Whitman scholars and found out they were not aware of these publications. He knew then he was onto something big.

“(This) is a significant discovery for a UH student because it makes clear to students here and elsewhere that history-making discoveries don’t only happen at Harvard and other Ivies,” Michael Snediker, UH’s associate English professor, said.

Snediker said that findings akin to Turpin’s are becoming rarer as archives are digitized and hidden documents dwindle in numbers.

“This (discovery) will likely factor into my dissertation to an extent,” Turpin said. “It’s a big, brazen, beautiful, and sometimes bizarre series. Now that I’ve opened the conversation about it, I don’t intend to get in the way.”