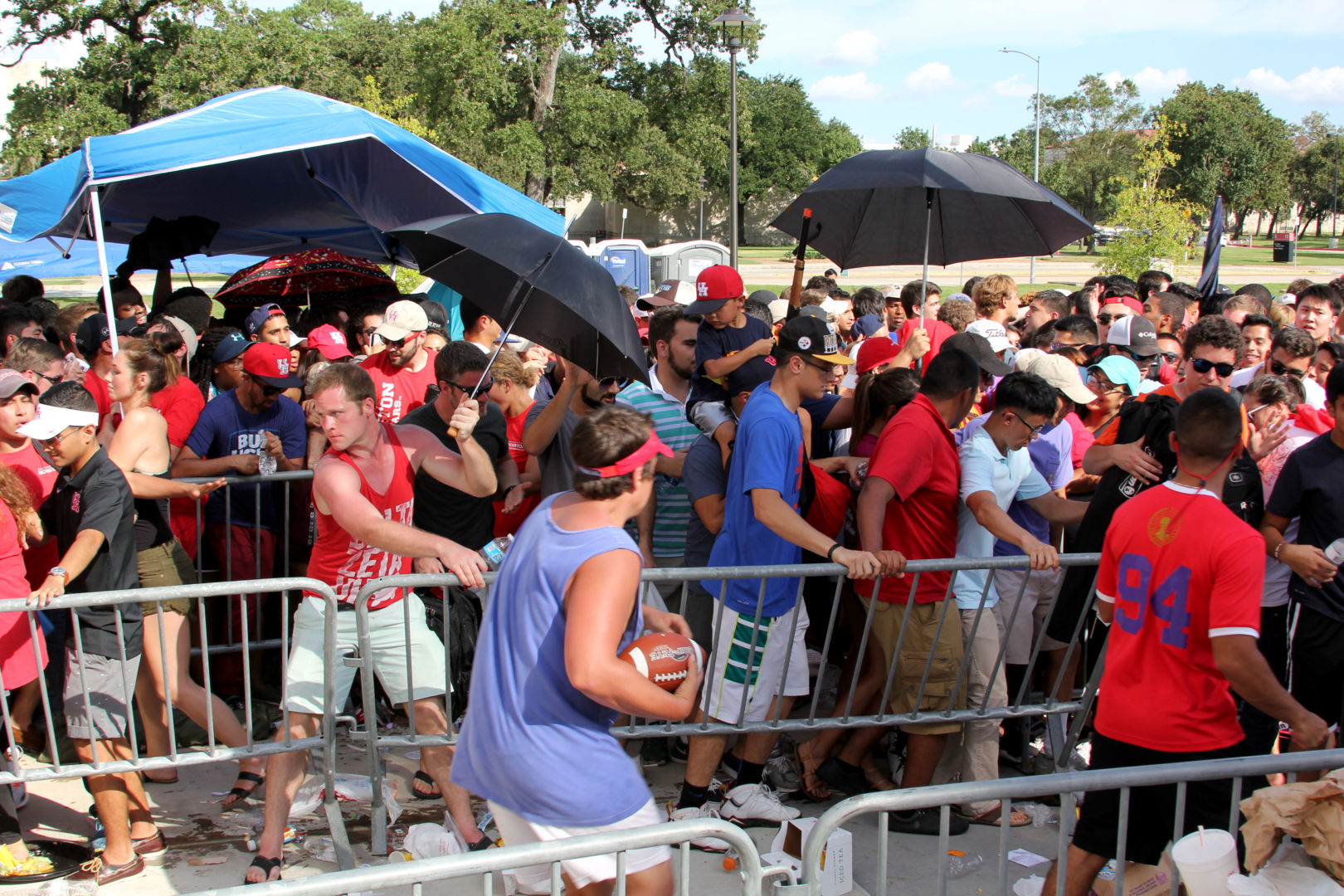 Toward the front of the line, students began to race to get one of the 1000 lower-level ticket vouchers. | Thom Dwyer/The Cougar

Sara Haats sweltered in the 86-degree heat near Taco Cabana when she witnessed a ticket line transform into a tailgate riot.

Haats, a psychology junior, lined up outside TDECU Stadium with thousands of students for UH Athletics’ annual Cage Rage on Aug. 27. As students raced to receive the first vouchers, they cut lines to form a stampede, and chaos ensued.

“If you followed the rules, all you got was screwed and a sunburn to go with it,” Haats said.

In anticipation of UH’s opening game against the University of Oklahoma, students gathered early in the morning, waiting for the 5 p.m. distribution of ticket vouchers. UH Athletics announced online that students could acquire vouchers on a “first-come, first-serve basis.”

With temperatures as high as 86 degrees, students equipped themselves with umbrellas for shade, lawn chairs, coolers and tents. To pass the time, some students set up beer pong tables and played football on the lawn.

Pi Kappa Alpha member David Fuentes enjoyed the laid-back atmosphere of the event before the distribution of the vouchers.

“It felt like more of a tailgate than an actual line waiting for tickets,” Fuentes said.

But for more than seven hours, the line steadily increased as students began to cut to the front. Haats arrived at noon as one of the first 650 students in line, which meant she could anticipate receiving a lower-level ticket voucher. Only seven security officers were on site, according to UHPD.

The line began to move around 5 p.m., and panic ensued among students as they shoved their way through a gated fence to reach where the vouchers were distributed. Resisting the police, some students abandoned their beer pong tables and hopped barricades to avoid the mosh pit of students.

Haats said those who waited for hours received upper-level tickets despite their place in line, including herself.

“The worst part was when people started to get tickets, they proceeded to exclaim that they got a lower-level ticket and only got there at 3 p.m.,” Haats said. “I ended up meeting someone who had been sitting in line since 10 a.m., and she only got an upper level ticket.”

The Cougar reached out to the marketing department of UH Athletics for this story, but they deferred to David Bassity, the Associate Director for Strategic Communications at UH Athletics.

The Athletics Department said they always review the logistics of events they host in order to better the student experience in the future.

“Appropriate campus departments were apprised of the plan for student ticket voucher distribution ahead of time, and the area was monitored throughout the day to ensure student safety,” said Associate Athletics Director for Strategic Communications David Bassity.

Students were instructed to take their vouchers to the TDECU Stadium Ticket Office the following week to purchase tickets for $20, nearly half the price of a regular ticket. Some students managed to get several vouchers, which concerned some about the potential of wasted vouchers.

“When the purchase was being made, student IDs were scanned, thus preventing students from returning with a second voucher to purchase an additional ticket,” Bassity said.

In the midst of a surge of widespread support for the Cougars, many students took to social media to complain about the experience. Haats said that the process needs to change in the future.

“If UH is going to have any chance of joining the Big 12, they need to reevaluate how they are going to deal with the increased demand for student tickets and the current resurgence in popularity of the UH football program,” Haats said.

The University of Houston Police Department did not return a request for comment.