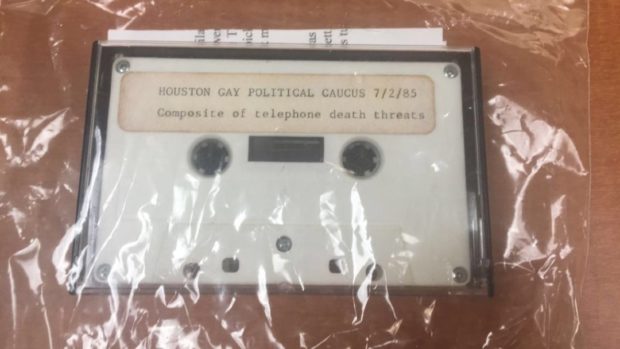 Former Houston Mayor Annise Parker and her wife, Kathy Hubbard, made a significant donation of archival material to the LGBT History Research Collection in the special collections department of the M.D. Anderson Memorial Library, according to their website.

Parker and Hubbard donated an assortment of LGBT and political-related ephemera, such as meeting minutes, newsletters, articles and audio-visuals. According to their website, the majority of the collection comes from the Houston GLBT Political Caucus, which was founded in 1975 as the South’s oldest civil rights organization dedicated solely to the advancement of LGBT rights.

“(Parker and Hubbard) want to contribute and make their primary source materials available to the next generation of students that may not know about Houston’s LGBT history,” Lee said. “They have been strong advocates for the library and also our LGBT research collections.”

In the early to mid-2000s, the Special Collections Department received Parker’s political papers, which Lee said included nine boxes related to her political career as city controller and city council member prior to becoming mayor.

“I think she realized there is another component to her career, an activism that she wanted to contribute to UH libraries, which documents her LGBT involvement within the community, both politically and as a member of the community to raise awareness and promote equality,” Lee said.

Part of the audio-visual materials donated are cassette tape recordings of threats the caucus received in the 1970s and 1980s. Lee said these tapes are still frightening 30 years later.

A box filled with an assortment of gay and lesbian yellow pages from across the country is also a part of the collection. Lee said he believes these are great resources because they document services, activities and businesses that have served the LGBT community.

“It’s super important to keep these pieces of history because it’s easy for queer history to be overlooked and ignored since we’re a minority community,” said biology sophomore Ethan Tullos.

The Special Collections Department comprises the rare books, archives and manuscript section of the library, which has 13 different areas of focus. Lee said the LGBT History Research Collection has grown exponentially within the last year.

“It’s a very new collecting area that we have created,” Lee said.

According to the the LGBT History Research Collection’s website, its collecting area includes library collections, personal papers and organizations records, which preserve and promote understanding of Houston’s and the region’s LGBT communities and service organizations.

Kelleher said that the library looks to find community members who can represent and help build each of the priority special collection areas.

“Having community members who have had the foresight to collect this material and now to preserve it and make it available to students and scholars here at University of Houston libraries is really going to support vibrant scholarship, vibrant teaching and vibrant engagement within campus and our local community,” Kelleher said.

The library wanted Parker and Hubbard to become co-cabinet members for the LGBT research collections because they wanted people who are known within the community to support and raise awareness, Vince said.

“Mayor Parker and Ms. Hubbard are leaders in Houston, Texas, and indeed, the country,” German said. “Their papers and materials that they’ve collected over the years tell the story of our LGBT population and culture.”

Vince said students, faculty and staff are welcome to go through the materials to utilize them for course plans, research opportunities and paper topics.

“Since queer history and discourse throughout history isn’t really taught in schools, this memorabilia is super important to newly out or questioning people to explore their history and identities and to see how far we’ve come and how far we have to go,” Tullos said.

Students are currently able to access the donated materials, but the librarians ask that students reach out to them in advance because it is a newly acquired collection, and they have not had the chance to fully process and rehouse the items.

A finding aid will be published online at a later date, allowing people to view available items.