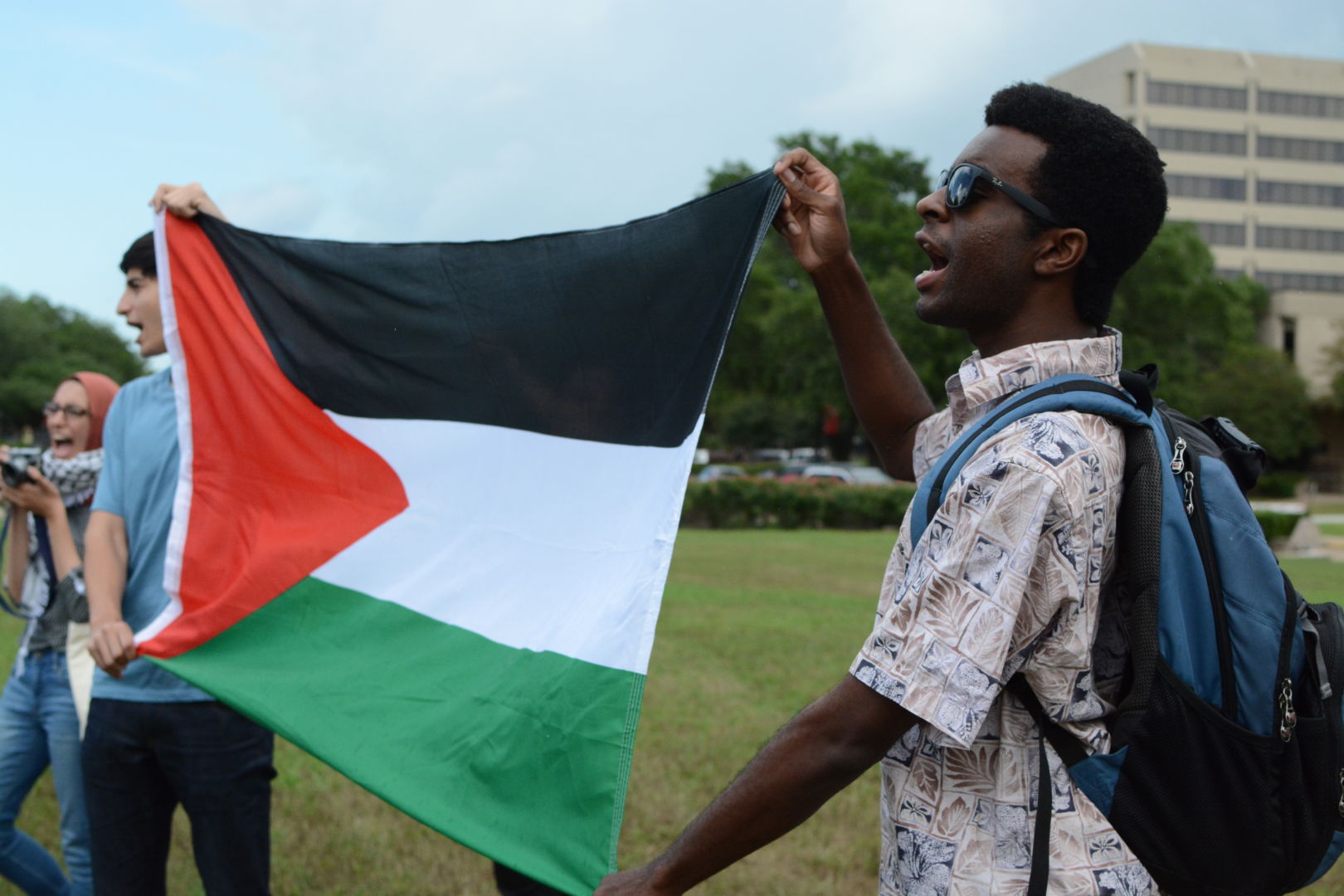 A pro-Palestine protest sparked by U.S. Ambassador to the UN Nikki Haley’s stance on the Israeli-Palestinian conflict continued in the lawn in front of the Cullen Performance Hall for 20 minutes after participants were escorted from the address. | Jasmine Davis/The Cougar

Nikki Haley, the U.S. ambassador to the United Nations, voiced Tuesday afternoon during a speech at UH’s Cullen Performance Hall that the United States needs to end divisions in order to make progress. Moments earlier, dozens of students protested her visit, shouting “Nikki Haley you will see, Palestine will be free” before exiting the building.

Haley was visiting the University to give a 20-minute speech followed by a Q&A with UH Regent Peter Taaffe. Multiple students, including members of Students for Justice in Palestine, shouted out in dissent and were escorted out by law enforcement officials to continue their demonstration on the lawn in front of the building.

“We are not listening to each other,” Haley said about the country 10 minutes later. “We are focusing on our differences rather than what brings us together. We are increasingly viewing those who disagree with us not just as wrong, but as evil.” An the beginning of Haley’s speech, a student stood and said “Nikki Haley, the blood is on our hands” followed by a walk out of pro-Palestine students. | Jasmine Davis/The Cougar

“Free, free, free Palestine,” student protesters chanted as they were ushered from the Cullen Performance Hall. Brandishing the Palestinian flag, participants proceeded outside to the lawn behind police barricades where the chanting continued.

Unhappy with Haley’s response to Israel’s violence against Palestine — specifically in regard to a recent attack in Gaza that resulted in the deaths of 60 people — the participants pulled together a grassroots effort through social media to protest her on-campus appearance.

The protestors, UH students, disagreed with UH’s decision to host an individual they viewed as “signing off on genocide.”

“We figured trying to talk with her in a Q&A session, with her views already well-grounded, would only further her misinformation,” said history and finance junior Muhammed Fattouh regarding the group decision to walk out instead of engaging in a conversation with Haley. “Why should we walk into these events and assume that what we’re listening to is good?”

Although the walkout lasted for fewer than 10 minutes, participants hope to stretch the message captured in this moment of action to a broader audience.

“From here on out, this can take its most powerful message through social media,” Fattouh said.

The demonstration has already garnered some attention from the public for their efforts, including that of UH alumnus Xavier Vasquez.

Participants believe that the message of their actions is not just about American spirit, but also UH values.

But the Israeli-Palestinian conflict was not the sole topic of Haley’s address.

Last year, one of Haley’s focuses was sanctioning North Korea. She said China and Russia were opposed to sanctions at first, but she told other nations she could not guarantee how U.S. President Donald Trump might respond to alternative actions, hinting at the possibility of military force.

“The truth is, I would always use the unpredictability of Trump to get the sanctions through,” Haley said.

The U.N. ultimately passed the sanctions on North Korea.

Haley also commended Trump for U.S. participation in an April air strike against Syria in response to Syria’s use of chemical weapons.

“The president, in one fell swoop, sent a message to the world,” Haley said. “The number of countries that contacted me or came up to me and said ‘it’s so good to see the United States lead again’ was amazing.”

UH President Renu Khator introduced Haley as “a champion of human rights” and proof that women can have both a career and family.

Political science junior John Douglas, who currently interns with Ted Cruz, took a picture with Haley afterward and asked if he could intern with her. He said Haley’s assistant gave him a business card for further contact.

“She’s someone I really respect, and I’ve followed her ever since she was governor of South Carolina,” Douglas said. “When she became ambassador at the UN I got really excited, and I’m happy to come see what she (had) to say.”