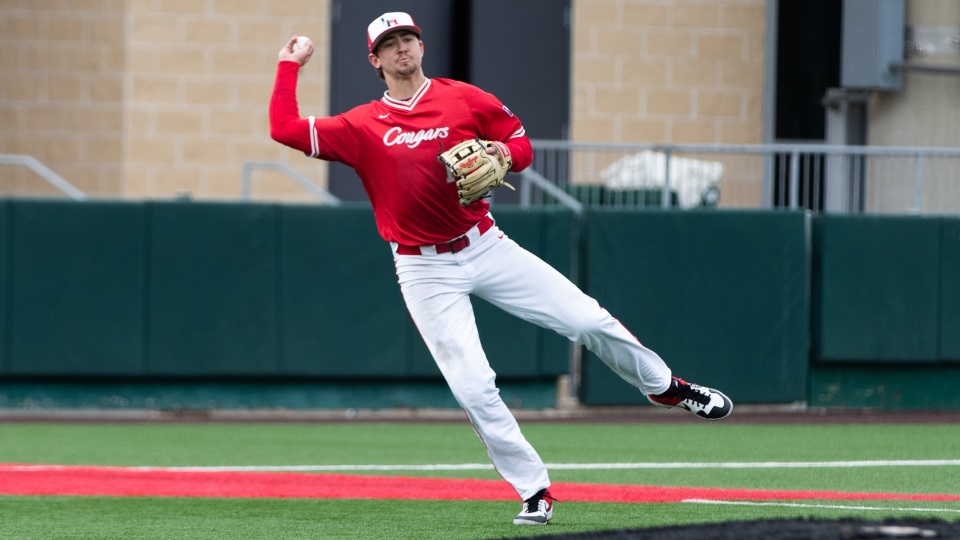 The Cougars have struggled in the first legs of American Athletic Conference play, but the team has managed to avoid being swept. | Ahmed Gul/The Cougar

Houston traveled to Memphis over the weekend and looked to keep up the momentum from its midweek wins against Sam Houston and Stephen F. Austin but had a rough Friday to lose the series.

Houston dropped both games in the Friday doubleheader to start the weekend, though both games were close.

In game one, Memphis took an early 3-0 lead and threatened to score again in the second, but a nice relay by Houston got the out at home plate to end the inning.

The next three innings were uneventful until Memphis added four more runs in the fifth to make the score 7-0.

The Cougars finally got on the board in the sixth with a solo home run by junior outfielder Jared Triolo.

In the eighth, senior outfielder Grayson Padgett singled to open up the inning and set up the Cougars to capitalize off of freshman Derrick Cherry’s two-run bomb to make it 7-3, but Houston could not come back.

The Cougars dropped game two of the doubleheader after they started off on the wrong foot again, falling behind early in the first inning after a Memphis grand slam.

The Cougars fought back in the third starting with singles by Padgett and Triolo, followed by senior Joe Davis’s three-run home run to put the Cougars within one run.

After the early struggle, senior pitcher Ryan Randel retired the next 14 Tigers until he was relieved by senior pitcher Nolan Bond after 5.2 innings.

Houston managed to rally, and a solo home run by junior infielder Kobe Hyland’s made it 4-4 in the sixth inning.

Junior Fred Villarreal came in to close the game in the seventh and was aided by freshman Johnathon Thomas, who made a diving catch at the wall for the first out, but no fielding heroics could prevent the two-run bomb in the eighth to give the Tigers the game-winning 6-4 lead.

The Cougars escaped a sweep with a 4-3 victory over the Tigers on Sunday after falling behind early again.

Memphis strung a series of hits to score a pair of runs in the second inning to take its third lead of the series and kept up the momentum through the fifth, killing Houston’s threats and scoring off of an error by the catcher to make the score 3-0.

The Cougars had six pitchers see the field in the game and three different pitchers in just the fifth inning.

Houston got on board in the seventh off of a solo home run from senior utility player Rey Fuentes III. Freshman Brad Burckel and Thomas were both walked before Burckel was sent home by Triolo to cut the lead to 3-2.

Houston tied the game up in the eighth off of a Davis double to send Hyland home. Davis advanced to third on a balk and scored on a fielder’s choice RBI to take the lead 4-3.

Villarreal came in to close and earned his fifth save, which makes him tied for second in the American Athletic Conference, in a three-up three-down inning.

Houston is now 2-4 in the AAC and 14-13 overall. Houston will continue on the road Tuesday night against Lamar before coming home Wednesday to play against Florida International.