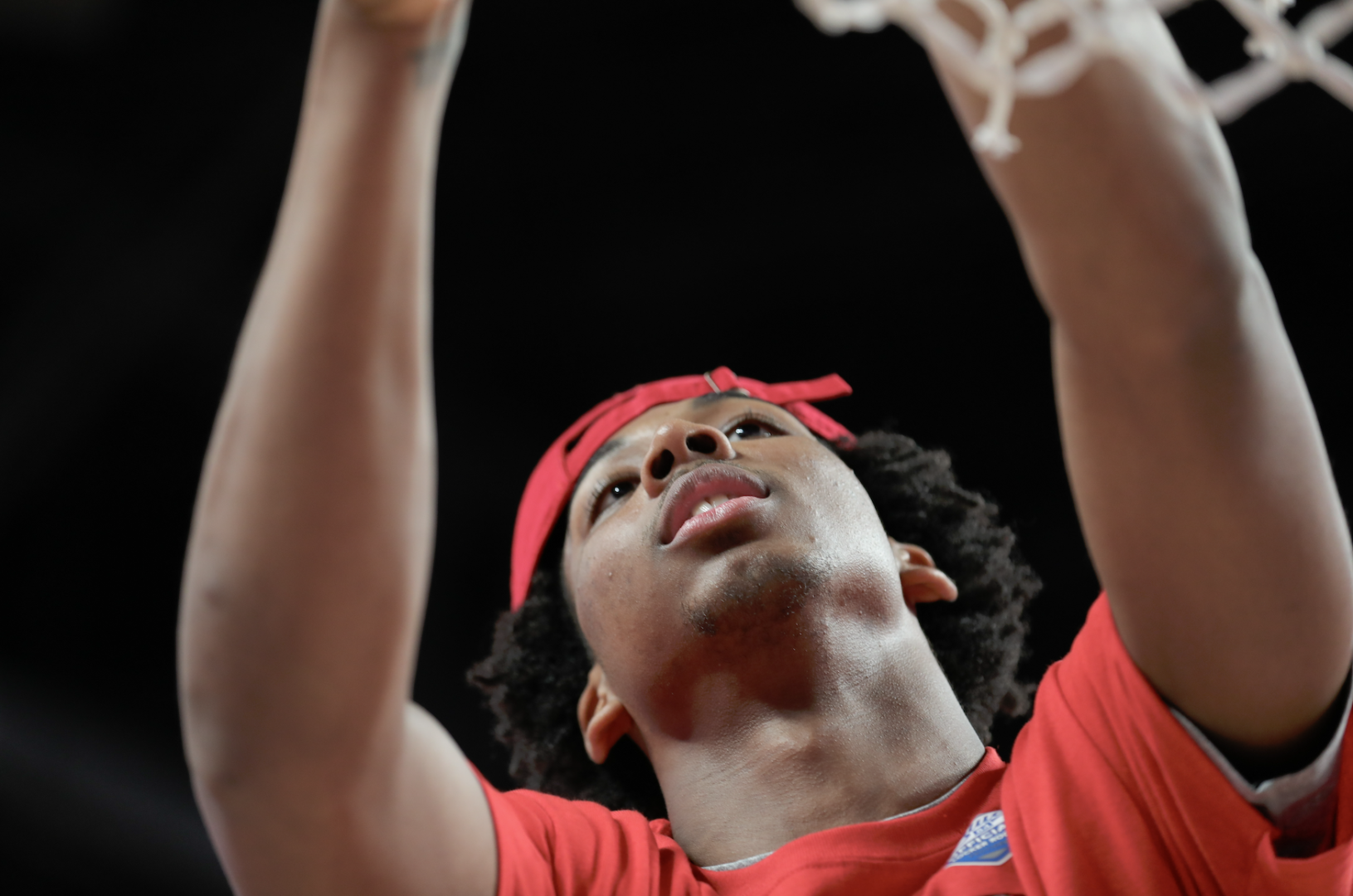 Guard Nate Hinton cutting down a piece of net after the Cougars won the AAC regular-season championship in 2019-20. As he prepares for the 2020 NBA Draft, he reflects on his collegiate career. | Mikol Kindle Jr./The Cougar

One of the final memories Nate Hinton has of the UH men’s basketball team occurred on the morning of March 12.

As the story goes, the team was on its way to Fort Worth to compete in the American Athletic Conference Championship tournament, when its bus had to make a sudden U-turn after the event was canceled due to the coronavirus pandemic.

A few hours and a Buc-ee’s stop later, the Cougars were back on campus and soon they each went their separate ways.

For the 6-foot-5-inch Hinton, although he might not have realized it, his time at UH was done.

After a few weeks went by, news spread that he had decided to enter his name in the NBA Draft, and while the initial thought process was to just enter for the feedback, when those assessments started coming in, his mentality began to change as well.

Soon Hinton realized he had reached a crossroads. He had to decide on whether to return to UH for his junior season or forgo his remaining years of NCAA eligibility and keep his name in the draft, which was not an easy task for the Gastonia, North Carolina, native to do.

With UH seemingly a lock for its third straight NCAA tournament appearance before the coronavirus pandemic gave March Madness a whole new meaning, Hinton had plenty of reason to return to the Cougars if he had chosen that path.

Instead, he opted to pursue his lifelong dream of making it as a professional basketball player in the NBA.

“I prayed on it and came to peace with it,” he said. “A few weeks later I was like yeah, this is what I need to do. I need to pursue this career and whatever comes with it.

“I’ll roll the dice and bet on myself.”

Once Hinton made his decision, he reached out to Sampson, and while there was still a lot left to be desired with how the 2020 season ended, the guard said his former head coach backed him up with his choice.

“It’s like you’re breaking up with someone,” Hinton said. “We didn’t get to finish it how we wanted to finish it in a normal situation, but I think that at the end of the day, he respected the decision and he wanted the best for me.”

It was Sampson who first encouraged Hinton to enter his name in the draft to receive the feedback, both the head coach and guard have said on various occasions.

“Nate is a special young man who will always have a special place in my heart,” Sampson said after Hinton announced he was not returning to UH in May. “He continued to improve through his two years, and I firmly believe his best basketball is ahead of him.”

As weeks have now turned to several months since Hinton was on the bus heading to Fort Worth, his days look a little different now.

Hinton is constantly focused on basketball and looking for ways to improve.

An average day for him starts with a run to the gym. Once that is over, he returns home where he now has a chef who prepares his meals.

Depending on the day, it may include a nap, followed by film study, another workout session at the gym, more meals and plenty of emphasis on body recovery and, of course, basketball.

A certain area in his game Hinton said he has focused on is sharpening his ball-handling as well as other things he was unable to put on film a lot during his time in Houston.

While the NBA Draft has now been pushed back to Nov. 18, it gives Hinton more time to continue to work on his craft.

While not physically a part of UH’s program anymore, Hinton continues to stay connected whether it be with current or former Houston players who also pursued a pro career, especially Damyean Dotson, who Hinton says has given him numerous bits of advice since declaring for the draft.

Regardless of where Hinton’s journey as a professional takes him, he will never forget about his time at UH, which provided him with multiple opportunities and helped him open his eyes, he said. He even plans to one day return to finish his degree in sports administration.

“At the end of the day, I’m a representative,” Hinton said “I’m one of (Sampson’s) players. It’s always going to be love, and I am always going to show love, and anything that they need from me, I’m going to give. I’m here. I’m all in for them.”

With the draft less than 60 days away, the Gastonia, North Carolina, native’s pitch to NBA teams on why they should pick him is simple but clear.