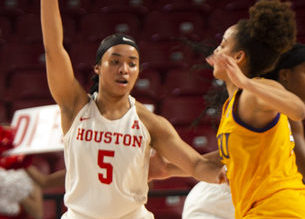 The Houston women’s basketball team hit the road to close out its season series against Tulsa, getting past the Golden Hurricane 64-56.

After trailing 9-3, sophomore guard Britney Onyeje, who tallied 10 points and nine rebounds, knocked down a 3-pointer to put UH within three.

From there, the Cougars struggled to get shots to fall, going 3-of-14 from the field. Tulsa’s hot start led to a 17-10 lead going into the second quarter.

UH couldn’t seem to pull things together in the next period, picking up its fourth turnover, while the Golden Hurricane had none, but this did not last as the Cougars would see a much stronger second quarter.

Things were trending up after back-to-back 3-pointers from fifth-year guard Eryka Sidney and junior guard Dymond Gladney made it a six-point game.

The UH women’s basketball team’s pressure forced Tulsa to throw the ball out of bounds before sophomore forward Jazmaine Lewis, who tallied 12 points and nine rebounds, made the layup, cutting the Cougars’ deficit to just two.

After a free throw from Laila Blair and a jumper from freshman forward Kamryn Jones, UH regained the lead.

The rest of the quarter went like a seesaw as the lead bounced between the two teams.

The third frame saw even more back and forth baskets, but UH pulled away toward the end.

The Cougars utilized the inside-out game, feeding Lewis for four-straight points to put UH up 46-42.

Adding onto the offensive spurt, more 3-pointers, this time from Onyeje and Blair, helped the Cougars gain its largest lead of the day, 58-48, with just under six minutes left.

Four points in a row from sophomore guard Miya Crump, who recorded 11 points and nine rebounds, also worked to seal the victory for UH.

The Cougars continued to dominate until the end, sweeping the regular-season matchups against Tulsa (5-7, 4-7 AAC).