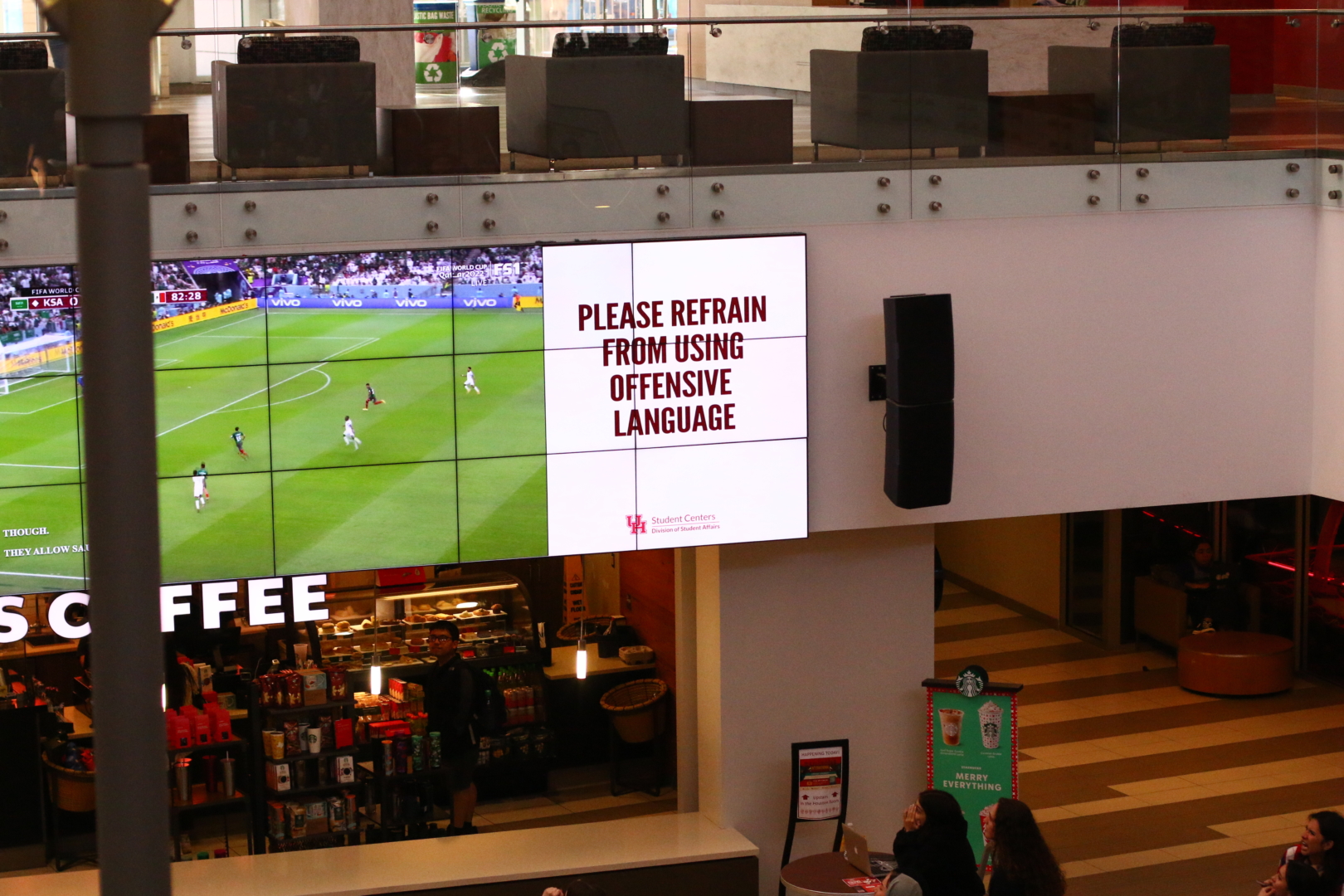 A disclaimer was displayed on the big screen inside Student Center South at UH after dozens of Mexican soccer fans were heard using a homophobic chant during a World Cup watch party. | Anh Le/The Cougar

Dozens of fans at UH packed into Student Center South on Wednesday afternoon to watch Mexico’s pivotal match against Saudi Arabia, but many of them turned heads after a homophobic chant notorious among Mexico soccer supporters was heard multiple times.

The chant, which includes a homophobic insult and is typically aimed at opposing goalkeepers, was shouted throughout the match, even after a disclaimer was displayed on the big screen inside SC South.

One student centers staffer confirmed that the disclaimer was put on the screen after the chant was used earlier in the match.

“The University of Houston stands firm on the values of diversity and inclusion, and the chants heard during the World Cup watch party at the Student Center do not represent the University of Houston,” said UH spokesperson Chris Stipes. “We are a place where individuals of all backgrounds and beliefs can express themselves. The chant used by some fans of Mexico’s national team is offensive to many, and we encourage our campus community to demonstrate civility and respect for those around them when expressing themselves.”

Although UH “does not condone or endorse hate speech,” it has no power to ban it on campus. Its anti-discrimination policy, which used to cover harassment such as “epithets or slurs,” “negative stereotyping” and “denigrating jokes,” was revised earlier this year after the school was sued by a conservative group.

The chant has long been controversial and has landed the Mexican Football Federation in hot water in the past. The federation has been sanctioned several times, according to The Athletic, and has had to play home matches without fans earlier this year because of it.

It has even led to FIFA, the soccer world’s governing body, opening an investigation into Mexico after fans used the chant in the country’s opening World Cup match against Poland on Nov. 22.

Although the Mexican federation has enacted a zero-tolerance policy that includes banning fans for five years for using homophobic remarks, some activists have said more needs to be done to prevent the chant.